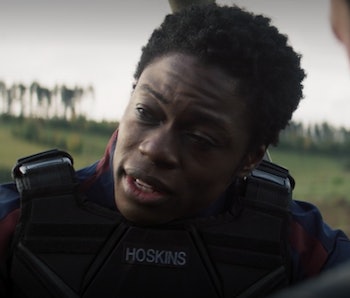 Marvel just introduced some major new characters to its cinematic universe. Falcon and the Winter Soldier Episode 2 gives us a surprisingly nuanced take on John Walker (aka, the new Captain America, aka, U.S. Agent). We also meet the original Black Captain America, Isaiah Bradley, and his grandson and Young Avenger-to-be Elijah. And then, there’s Battlestar.

The new Captain America’s best friend has a surprisingly complex Marvel Comics history of his own. One that’s further complicated by his apparent role in The Falcon and the Winter Soldier.

Lemar Hoskins (Clé Bennett) first appears early in the episode as John Walker’s friend, but when the new Captain America later shows up to help Sam Wilson and Bucky Barnes out of a jam, Lemar is quickly elevated to sidekick status. Soon afterward, we learn that he’s taken on the superhero name Battlestar — a reveal that disgusts Sam and Bucky.

But what’s the problem with Battlestar? The character has a long and interesting history in the comics, but his appearance in the Marvel Cinematic Universe opens up a conversation with one of the superhero franchise’s worst and most dangerous tropes — one that we had hoped was already behind us.

Who is Battlestar in Marvel?

First appearing in Captain America #323 (November 1986), Lemar Hoskins was originally introduced as one of several unnamed characters in a group called the Bold Urban Commandos (BUCs). He later became the fifth character to take on the name Bucky as John Walker’s sidekick in the Marvel comics, but that wouldn’t last long either.

The character was created by two white comic book editors, Mark Gruenwald and Paul Neary, but they were later informed by Dwayne McDuffie (the Black comics and TV writer behind Static Shock, Justice League Unlimited, and Ben 10), that “Buck” was a racist term used to refer to male slaves in antebellum America. McDuffie also pointed out that casting a Black man as a sidekick (a role typically reserved at the time for young boys) was problematic.

So Lemar Hoskins became Battlestar and a partner in crimefighting to “Captain America.” Battlestar later fought against John Walker (after the character becomes U.S. Agent), and he sides with the real Captain America (Steve Rogers) in the crossover comic event Civil War.

In the comics, Battlestar’s powers, which come from the Power Broker, include superhuman strength, agility, and flexibility. He’s also trained in gymnastics, acrobatics, and hand-to-hand combat; and he carries an adamantium shield.

Battlestar and Falcon and the Winter Soldier

When Battlestar is introduced in Falcon and the Winter Soldier, Marvel is careful not to make the same mistake again. Lemar Hoskins clearly identifies himself as John Walker’s “partner,” not sidekick.

The way the scene is framed also echoes this idea. Sam and Bucky (clearly equal partners) sit opposite these two new characters. Marvel’s message is clear: there are no sidekicks in this car.

But is that what’s really what’s happening? And will anyone who watched Falcon and the Winter Soldier Episode 2 come away thinking Battlestar is anything but John Walker’s sidekick? From their corny high-five on top of a moving truck to Lemar’s already apparent role as the tech guy, it seems like Marvel is slipping into sidekick territory, and not for the first time.

The MCU has a long and documented history of casting actors of color as sidekicks to white superheroes. From Ned in the Spider-Man movies to Maria Rambeau in Captain Marvel to even the Captain America franchise with Anthony Mackie in Winter Soldier, it’s hard not to see a pattern of white superheroes supported by non-white sidekicks. Is Battlestar continuing the same trend, intentionally or otherwise?

As Marvel Studios entered Phase Four, there was hope this pattern would end. Giving Anthony Mackie’s Falcon the starring role is a good start, and the fact that Samuel L. Jackson is finally getting his own story in Secret Invasion is worth noting too. But it’s a little worrying to see Falcon and the Winter Soldier casually introduce what looks a lot like another Black sidekick.

There’s reason to believe Battlestar’s Falcon and Winter Soldier story will be a powerful one. The comic book history of the character certainly paves the way, both in terms of how the late Dwayne McDuffie’s feedback changed Battlestar’s trajectory, as well as events in the comics themselves.

Battlestar eventually sides with Steve Rogers in Marvel lore. Will he make a similar choice in Falcon and Winter Soldier, stepping away from John Walker, a man he’s known for years but one he may come to lose faith in? We can certainly hope that by the end of the series, there are unequivocally zero sidekicks in the proverbial Marvel car — just heroes, standing in their own right.