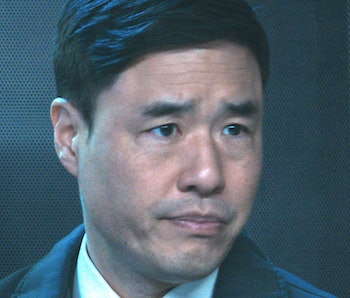 After a season full of red herring Easter eggs, I should probably know better by now. But when Jimmy Woo calls his friend "Cliff" in the WandaVision series finale, I couldn't help but type that name into Google. What I found could change the plot of one of the biggest upcoming stories in the Marvel Cinematic Universe in some pretty surprising ways.

Warning! Spoilers for the WandaVision finale ahead.

Who is Cliff in Marvel?

Quick recap: In WandaVision Episode 9, S.W.O.R.D. director Tyler Hayward makes his final move, leading a small platoon of soldiers into the Hex after Wanda temporarily opens it up during her showdown with Agatha Harkness. At the same time, James Woo calls his FBI buddy "Cliff" after being captured by Hayward but using his sleight-of-hand magic skills to steal a phone and break out of his handcuffs.

We learn nothing about Cliff, and when the FBI does show up there's no big moment where it turns out Jimmy's colleague is actually a superhero. However, is it possible that Cliff could still be a reference to a fascinating chapter in Marvel comics history that's about to be extremely relevant?

In November 1968, Nick Fury, Agent of S.H.I.E.L.D. #6 told the story of Cliff Randal and the Collective Intelligence. The basic premise is that a hive-mind alien race from another dimension is forced to flee from a doomsday device and winds up on Earth. Some of the Collective Intelligence stay hidden, while others (including Cliff Randal) disguise themselves as humans and infiltrate our society.

Cliff ends up working for S.H.I.E.L.D. and he eventually develops a sense of duty to his new home. When the rest of the Collective Intelligence decides to use an asteroid to destroy the Earth (to be fair, it's the only way to power their trans-dimensional portal so they can return home), Cliff turns against them. He sabotages the alien ship, presumably wiping out the last of the Collective Intelligence and rendering his own species extinct.

It's a fascinating little story, but does it matter at all to the modern MCU? Probably not, unless Marvel plans to adapt some of these ideas into another upcoming arc about an alien Skrull invasion...

The WandaVision finale's mid-credits scene sets up the Disney+ series Secret Invasion when a Skrull pulls Monica Rambeau aside and blatantly hints that Nick Fury would like to see her.

We already know Secret Invasion is happening and Nick Fury will be its main character. We also know that Secret Invasion is the story of shapeshifting aliens (aka, Skrulls) infiltrating the highest levels of power on Earth by impersonating human leaders and even superheroes.

It's possible the MCU's Secret Invasion could follow the comics beat-for-beat, but there's just one problem. Thanks to Captain Marvel, the Skrulls are already the good guys. Sure, the Disney+ show could reveal that there's an extremist faction of Skrulls, but maybe we're be dealing with another race of alien villains altogether?

But even if Secret Invasion sticks to Skrulls, it can still borrow another big idea from Cliff and the Collective Intelligence: the multiverse. After all, the MCU is already gearing up to introduce the concept of multiple dimensions in Doctor Strange in the Multiverse of Madness, and a parallel dimension filled with evil Skrulls could be the perfect twist to keep fans guessing during Secret Invasion.