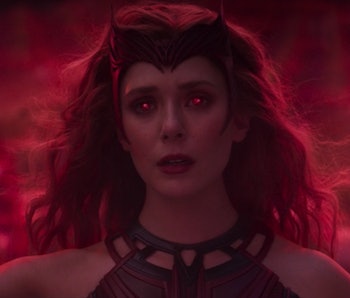 It’s the end of the world as the MCU knows it. With its finale, WandaVision’s ending set up dark things to come for Elizabeth Olsen’s Wanda Maximoff, as well as the greater Marvel pantheon. The Disney+ series concluded with Wanda not only assuming her fabled Scarlet Witch form but also with her reading through the Darkhold (a.k.a. the book of the damned).

According to Kathryn Hahn’s Agatha Harkness, the Darkhold contains a whole chapter predicting that The Scarlet Witch will “destroy the world,” and many fans have assumed that Wanda’s time with the book may result in her doing just that.

One new Marvel fan theory adds further fuel to that theory and even suggests the unexpected way the prophecy may come true in next year’s Doctor Strange in the Multiverse of Madness, where Olsen is set to reprise her role as Wanda.

The Theory — Redditor u/tBHzHomer believes that the Doctor Strange sequel will see Wanda “jumping across multiple realities” searching for her twin sons, Billy and Tommy, as was hinted at in the WandaVision finale’s post-credits scene. The Redditor argues that Wanda’s search will result in the barriers between the alternate realities of the multiverse breaking down and bleeding into each other, which is what will cause Benedict Cumberbatch’s Sorcerer Supreme to finally get involved.

However, the Redditor suggests that Hahn’s Agatha may have misinterpreted the prophecy in the Darkhold. They think that, instead of Wanda destroying the world on her own, she will do so by accidentally letting a villain capable of destroying the world finally enter the Earth realm. The user speculates that the villain will be manipulating Wanda the whole time, and could turn out to be Mephisto, Nightmare, or an “amalgamation of the two characters.”

The Darkhold Prophecy — Marvel fans have been speculating that Wanda’s role in the MCU moving forward will result, in some way, in the introduction of villains like Mephisto, Nightmare, or Chthon. Nothing like that came to pass in WandaVision, though, as the series chose to focus solely on Wanda’s journey as a character and not on introducing a new villain to the MCU.

It wouldn’t be surprising if Doctor Strange 2 took a similar approach to its story and focused just on the possible conflict between Wanda and Strange, without the added influence or manipulations of another third party. Although to be fair, it would make more sense to introduce a powerful, game-changing villain like Nightmare, Mephisto, or Chthon in the Doctor Strange sequel than in WandaVision. Taking that into account, it’s definitely not out of the realm of possibility that the film will feature the introduction of a villain of that magnitude.

It is also worth noting that WandaVision makes it explicitly clear how manipulative and untrustworthy Agatha is, so it’s entirely possible that she was intentionally misrepresenting what the Darkhold’s Scarlet Witch prophecy really is. That being said, she did seem legitimately scared of Wanda’s power, and her warning to Wanda that she’ll “need” her did seem to imply that Agatha believed at least some of what she said about Wanda’s future.

The Inverse Analysis — WandaVision, in keeping with Marvel tradition, went out of its way to surprise fans and give them unexpected solutions to the show’s many mysteries. It’s only logical to assume that the second Doctor Strange film will be equally difficult to predict, especially with a title as foreboding as Doctor Strange in the Multiverse of Madness.

It’s assumed — based on how WandaVision ended — that Wanda’s work with the Darkhold and her possible search for Billy and Tommy will make her an unintentional villain in the film, but even that isn’t an absolute certainty right now. However, there’s no way Marvel would introduce a prophecy about the destruction of the world without following through on it in some way either.

It’d also be in keeping with their usual subversive selves to offer up a solution that both holds Wanda accountable for her actions and introduces a powerful new being into the MCU. For now, we’ll just have to wait and see if that’s really what Marvel has in store for us.

Doctor Strange in the Multiverse of Madness will be released in theaters on March 25, 2022.