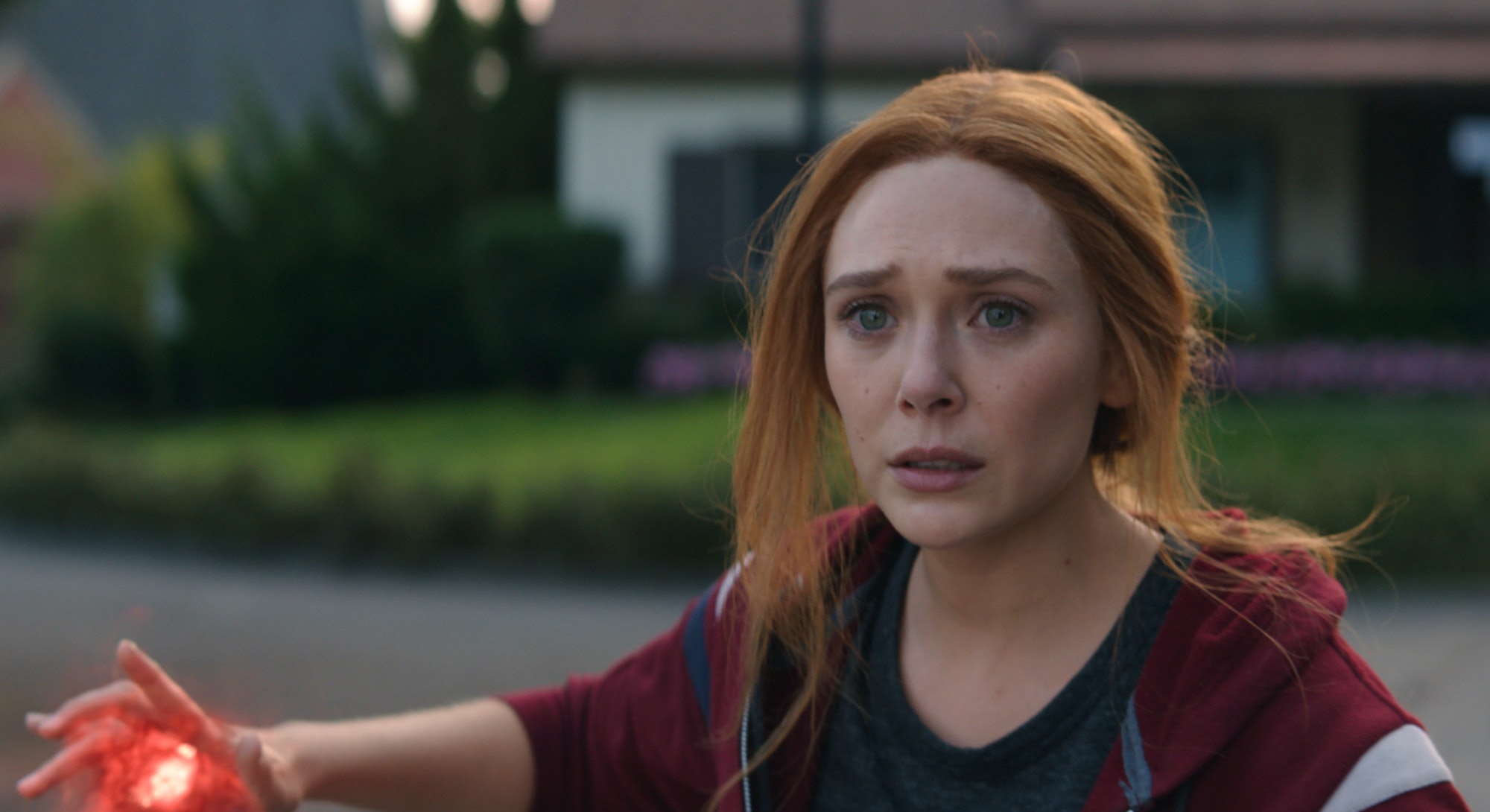 Everyone loves Star Wars, even Elizabeth Olsen. In a recent interview, the actress revealed it was that far, far away galaxy that inspired her to take on big popcorn movies as an actress, which led to her audition for Wanda in the Marvel movie franchise.

"I was obsessed with Star Wars," Olsen told Collider. "You couldn’t peel me away from Star Wars as a child. And so I was trying to figure out, how do I start putting that out there because I feel like all I’m getting are these really disturbed women in independent films."

It's funny how Olsen's childhood obsession connects with her present role in the Marvel Cinematic Universe — because one movie in the Star Wars pantheon shares eerie similarities to her buzzy work on WandaVision.

For all the uproar the 2017 movie Star Wars: The Last Jedi still stirs for certain fans, one thing it isn't is dishonest. The movie laid bare at several points its thematic thesis: Your expectations are not canon. This was made clear when Luke Skywalker, played by a grayed-out Mark Hamill, threw his lightsaber away like a crumpled gum wrapper. The way Luke later screams "The sacred texts!" with panic is not unlike how fans felt when he tossed a revered relic with a shrug.

With The Last Jedi, writer-director Rian Johnson did one thing: He questioned everything. WandaVision is doing the same thing for our expectations of the Marvel Cinematic Universe.

It's hard to imagine the state of the fandom four years ago, but in the months leading up to The Last Jedi, there were recurring talking points: a desire for Luke Skywalker to crush the First Order, theories about Snoke as the supreme mastermind (and maybe even a Moff Tarkin clone), hopes for Rey to descend from Obi-Wan Kenobi's line.

The Last Jedi all but takes a lightsaber to those questions. It challenged fans' self-assigned expectations of what a Star Wars movie ought to be, and instead asked viewers to consider a curious, not vicious question: "Why do you want this?" The film ruminates not just on Star Wars, but fandom at large, and the well-meaning but often unrealistic expectations that come with the territory.

In its own way, WandaVision was a rumination on fandoms too. In its final episode, the Matt Shakman-directed series absorbed the many expectations fans have for the MCU and flipped the channel. A Patrick Stewart cameo? Didn't happen. Was Doctor Strange involved? He wasn't. Mephisto ... who?

Shot like a movie (the early presence of a live studio audience aside), WandaVision aired on a strict schedule with no delays. This eliminated room for the audience and WandaVision's writers to develop an organic relationship, a well-known phenomenon of TV before seasons got dumped on streamers. And yet, WandaVision knew. Showrunner Jac Schaeffer and her team knew we would theorize the Hex out of WandaVision. For weeks, speculation ran the gamut of Doctor Strange to Mephisto to the X-Men. The finale did not deliver on any of those fronts.

And WandaVision never promised that it would.

It's premature to know the general consensus on WandaVision. Right now, writing these words, it's 1:05 p.m. on the Friday of the finale's release. By Monday, fans may crown WandaVision the zenith of the MCU, or curse it as a waste of nine weeks. A glance on Twitter reveals a lot of favorable feelings towards the finale, but there are still those bitter who didn't get the fan theories they dreamed up come true.

But WandaVision never promised "surprises." Bettany's trolling aside, what WandaVision promoted since the beginning was an exploration of nostalgia as a coping mechanism for pain, grief, and loss. It was not a teaser for a new X-Men movie (even if it was designed to set up Doctor Strange and the Multiverse of Madness).

It's even in the trailer, in the form of The Platters' 1958 cover of Les Brown's "Twilight Time." The lyrics tell of an eerie yearning for an absent spouse. The potent power of nostalgia and the promise of an impossible, pleasant dream — one that can't happen in reality, at least for now — is the same electricity that sparks WandaVision:

Did Marvel court the theories? Sure. Look no further than the way the studio announced WandaVision at Comic-Con in 2019 in the same breath as Doctor Strange in the Multiverse of Madness, with Olsen and Benedict Cumberbatch together on stage. It's an extravagant reveal designed to generate excitement.

But that's the frosting. WandaVision lived and died by the cake.

For nine episodes, it told the exact story it wanted to tell. A love letter to bygone television made elegiac by its central character's sorrow, WandaVision used its grieving protagonist to give us, the audience, seven words that sound like oxygen. Spoken by Vision, "What is grief if not love persevering?" is our collective pain given meaning as we keep surviving a pandemic.

The perseverance of love — that was the throughline. And to that end, WandaVision threaded the eye of the needle, if not the Eye of Agamotto. The show ended with the lesson that we can, surely, engulf ourselves in misery, we can hide away in artificial comfort. But when we accept reality and learn to move forward, that's when we persevere. That's the meat and potatoes of WandaVision. Whatever happens now, with Wanda as the "Scarlet Witch" and how it sets up Doctor Strange in the Multiverse of Madness, is only frosting.

Back to the galaxy far, far away. I think about how The Last Jedi told its story, whole and complete from beginning to end while still being conscious of the next storyteller in line — then Colin Trevorrow, later J.J. Abrams. The Last Jedi did not give its audience the bowl of frosting they thought they wanted. It did something that WandaVision went on to emulate years later. It gave us something we didn't know we needed, something we still need, something we will always need: A story about hope against overwhelming odds.