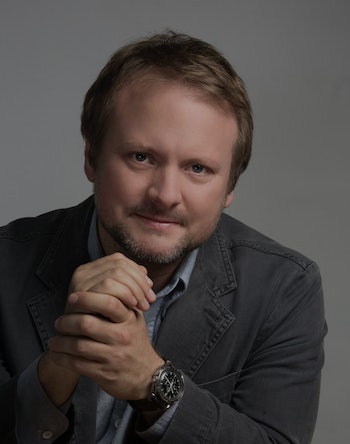 Rian Johnson doesn’t want anyone to think he’s here to shake-up Star Wars. In writing and directing The Last Jedi — out in wide release in theaters this weekend — Johnson wants to give the impression he was dutifully creating a film that fits in seamlessly with the rest of the mega-popular series. “I definitely wasn’t trying to put my stamp on it,” the director tells Inverse. “I was honestly just trying to write Star Wars dialogue.” And yet, Rian Johnson doth protest too much. The newest Star Wars film has strikingly naturalistic dialogue, which could only have been written by someone who wasn’t trying to force it. The characters in The Last Jedi sound like real people, so much so that even the famous catchphrase “May the Force Be With You,” is uttered with a layer of irony.

“I wasn’t even thinking consciously that I was trying to make it natural or modern. I guess I think about Han in the original movies and the banter in those movies. There’s always kind of a balance with the heavier dialogue, but there’s always some element of it where a pin pricks the bloom a little bit, and someone sort of outside of all of it becomes our entry point into this other galaxy. And I guess the thing that’s slightly different with [The Last Jedi] is all of the characters have a little bit of that. But, to me, having a slightly modern perspective will always be in there. I think that’s been part of Star Wars since the beginning.”

“Find what the honest moment would be, and then find the most dramatic version of it”

Like J.J. Abrams before him, Johnson obviously hasn’t been with Star Wars since the beginning. The 43-year-old filmmaker’s debut indie feature film Brick was released in 2005, the same year the last of the George Lucas-helmed Star Wars prequels — Revenge of the Sith — was still in theaters. Since then, Johnson has become a kind of mainstream auteur. From his trippy time-travel crime capper Looper, to the dark comedy, The Brothers Bloom, Johnson is a contemporary master of the plot twist. And, in addition to humanist dialogue and banter, his prowess with wielding an array of shocking story developments pervades the script for The Last Jedi. But, the director insists these aren’t really plot twists at all.

“The story decisions I made were 100 percent, completely organic. I was never rubbing my hands saying ‘how do I mess this up?’ or ‘how do I put this on its head?’ That was never the intent. My mission statement was to continue on from The Force Awakens.” But Johnson is aware of why people might get this impression. In 2015, Rey stood on the edge of a cliff, offering Luke Skywalker his family lightsaber. Now, in 2017, Luke Skywalker takes that lightsaber, pauses, and tosses it over his shoulder flippantly.

“Even something that seems as disruptive as the first moment with Rey and Luke, in our movie, that was just because when I thought about where Luke’s head had to be at in this movie, there didn’t seem to be any other possible way he’d react to that moment. It seemed completely honest to me. It seems like the most dramatic version of that. And that’s what you’re supposed to do. Find what the honest moment would be, and then find the most dramatic version of it. So, in terms of the big “twists” in the movie, they sprung from a process of trying to follow where these characters would go as honestly as possible.”

“The story decisions I made were 100 percent, completely organic.”

The dichotomy of good Star Wars films rests somewhere between realistic drama and grand, mythological scope. In one scene toward the end of The Last Jedi, Poe Dameron’s speeder is so ramshackle, that his foot actually breaks through the bottom of the cockpit and into the open air. Though it’s reminiscent of Han Solo slapping the controls of Millenium Falcon, it still feels unique to Johnson’s particular style. And even when it’s time to turn these real, honest characters into myths, he wishes there had a been a way to dramatize those moments. Luke Skywalker goes on to be a legend, again, in The Last Jedi, and Johnson places scenes in the film, showing just how many people around the galaxy know about Luke’s heroic deeds. But how do people on distant worlds find out about stuff that’s happened so many parsecs away?

“I’d like to think we skipped-over whispering montage. Like, one of the guys who was piloting one of the Walkers [on the planet Crait] who talks this cousin who is stationed on a base who talks to this guy in a cantina, and it starts spreading around,” Johnson says. “Legends spread, and legends grow, and legends get even more inflated as they’re retold. It would have been an interesting little montage to see. That game of telephone across the galaxy.”

Star Wars: The Last Jedi is out in theaters now. Rian Johnson will direct an all-new Star Wars trilogy sometime after 2020.