Who is Mephisto? Everything 'WandaVision' fans should know about the Marvel villain

“The influence of Mephisto knows no bounds.” 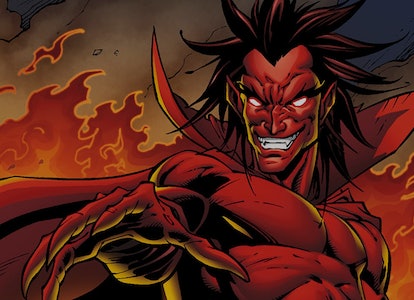 If you’ve been following the conversation surrounding WandaVision at all these past few weeks, then you’ve probably heard the name “Mephisto” more than a few times. The character has been repeatedly linked to the series, with many speculating that he’ll be the highly-rumored, secret villain of WandaVision.

If that turns out to be the case, then Mephisto would be a powerful new presence in the MCU — one whose web of influence could touch multiple upcoming Phase 4 titles. In other words, you should probably have a general understanding of who Mephisto is, just in case the character does end up appearing in the MCU.

Luckily, we’ve got you covered.

Here’s everything you need to know about Mephisto, including his comic book history, notable relationships, and what upcoming Marvel films and TV shows he could show up in.

Mephisto is, to put it as simply as possible, Marvel’s Devil. He’s an extra-dimensional being who rules over his own dimension, which he refers to as “Hell" or "Hades."

Mephisto has red skin and wears red clothing, and essentially uses his similarities to the Christian Devil to further terrify unaware human beings on Earth. He’s had notable relationships and rivalries with a number of heroes over the years, including the Silver Surfer, Ghost Rider, Doctor Doom, Doctor Strange, Spider-Man, and, yes, Scarlet Witch, as well as many others.

Mephisto also often makes the kind of Faustian deals you’d expect from a being like him, in which he gives superheroes something they want while also taking something vital away from them.

Is Mephisto in WandaVision?

As of now, it’s impossible to know if Mephisto really is in WandaVision or not. However, the Disney+ series does incorporate several elements and characters from a notable comic book storyline involving both Mephisto and Wanda Maximoff.

The story in question centers on Wanda using shards of Mephisto’s own soul to give birth to her twin sons, Billy and Tommy. That inevitably resulted in tragedy for Wanda, when Mephisto absorbed both of the boys. Wanda’s memories of her children were then erased by Agatha Harkness, in order to try and save her from the pain of her loss. This backfired when Wanda was later reminded of her sons and suffered a nervous breakdown — killing Agatha in the process. That sequence of events, in turn, led to the House of M comics storyline.

WandaVision’s inclusion of Agatha and Billy and Tommy, as well as some notable House of M Easter eggs, has led fans to believe it may be setting up Mephisto’s introduction in the MCU. The show has also included references to Mephisto over the course of its first seven episodes, though, whether or not those are all simply red herrings remains to be seen.

What is Mephisto's role in Phase 4?

Since Mephisto’s role in WandaVision is still unconfirmed, it’s impossible to know if the character will pop up in any of Marvel’s other Phase 4 films or TV shows. That being said, many fans think the trailer for Marvel’s upcoming Loki Disney+ series includes a reference to the character, which could hint at a possible appearance from him in Loki.

Mephisto has also had many dealings with Doctor Strange over the years in the comics, and since WandaVision is setting up Doctor Strange in the Multiverse of Madness, Mephisto’s possible presence in the show could mean he’ll appear in the Doctor Strange sequel as well. That all depends on if Mephisto is actually in WandaVision though.

It’s also worth noting that in the One Day More comic book storyline, Mephisto made a powerful deal with none other than Peter Parker. The deal saved Aunt May’s life, but also erased Peter’s marriage to Mary Jane from existence, along with the public’s knowledge of his secret identity.

Given how Spider-Man: Far From Home ended — with Peter’s identity as Spider-Man exposed to the world — it’s not out of the realm of possibility to think Peter might make a similar deal with Mephisto to restore his secret in this year’s Spider-Man: No Way Home.

Has Mephisto been cast in the MCU?

Since it’s still unclear if Marvel Studios is even using the character in the MCU, there’s no telling if anyone has been cast as Mephisto yet. But that hasn’t stopped fans from speculating as though someone has.

The most interesting Mephisto casting theory, which has gained popularity in recent weeks, is that Michael Corleone himself, Al Pacino, is playing the character. The argument itself rests solely on Paul Bettany’s comments that there’s a mystery actor in WandaVision he has wanted to work with his whole career. Pacino has previously expressed interest in working with Marvel, and he and Bettany have never worked together, which means he could be the actor Bettany is referring to.

Of course, there’s no telling if the mystery actor in WandaVision is even playing Mephisto, let alone if it’s Pacino. However, for what it’s worth, Pacino does have experience playing roles very similar to Mephisto in the past, so there’s that, at least.

Fortunately, with only 2 episodes left to go of WandaVision, fans won’t have to wait long to find out if all this Mephisto research and theorizing was worth it or not.

More like this
Entertainment
Jan. 17, 2023
Guardians of the Galaxy 3's Adam Warlock reveal may be a big misdirect
By Eric Francisco
Entertainment
Jan. 25, 2023
The MCU could bring back a hero from its most underrated TV show
By Dais Johnston
Entertainment
Jan. 26, 2023
Corey Stoll could have the chops to make a live-action M.O.D.O.K. work
By Mónica Marie Zorrilla
LEARN SOMETHING NEW EVERY DAY.
Related Tags
Share: