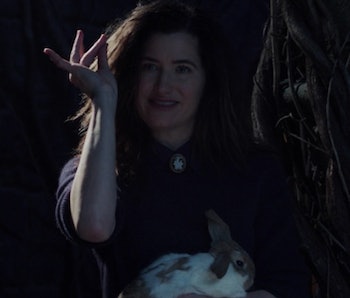 WandaVision Episode 7 ended with a bombshell. The final minutes confirmed what many Marvel fans had long suspected (Spoilers!) that Kathryn Hahn’s Agnes is actually Agatha Harkness, a powerful witch from the Marvel comics. The reveal was followed by an extremely catchy musical montage showing all the times Agatha secretly manipulated Wanda and Vision in earlier episodes of the show — she even killed Sparky!

The montage shows fans Agatha’s evil side, and it sets her up as being WandaVision’s main antagonist. But there’s still reason to believe that Agatha isn’t the only bad guy in Westview. Instead, there may be another powerful Marvel villain lurking in Westview, one that we’ve already seen with Agatha multiple times.

The Theory — Ever since WandaVision’s second episode premiered on Disney+, Marvel fans have been speculating about Señor Scratchy, Agatha’s pet rabbit. The rabbit’s name immediately caught the attention of keen-eyed Marvel comics fans, and for good reason too.

There are two major characters in the Marvel comics who are linked to the name “Scratch.” The first is Mephisto, a character long-rumored to be WandaVision’s secret villain, who has gone by the names “Nick Scratch” and “Jack Scratch” at different points in the comics. The other is a sorcerer named Nicholas Scratch… who also happens to be Agatha’s son.

But is it really possible that Señor Scratchy is a villain like Mephisto or Nicholas Scratch in disguise?

WandaVision Episode 7 features multiple appearances of Señor Scratchy. The first is when Billy is holding the rabbit in his lap while talking to Agatha early on in the episode. He then shows up again — this time caged — when Wanda sits down on Agatha’s couch and is seen for the last time being held in Agatha’s arms when she reveals her true identity to Wanda in the basement.

Of course, Kathryn Hahn may have just wanted to hold the rabbit in her arms during the episode's climactic scene (a la Marlon Brando holding the cat in The Godfather). However, there’s no denying that the rabbit is referenced quite a few times in the episode, and his prominent presence during the Agatha reveal scene seems to hint that he’s not just set dressing.

While it might seem odd for a character like Mephisto or Nicholas Scratch to be introduced as a rabbit in WandaVision, there are, strangely, some moments sprinkled throughout WandaVision Episode 7 that hint at humans being turned into animals — and vice versa.

During Monica and Wanda’s confrontation, there is the brief reappearance of the Westview mailman that we’ve already seen a number of times. Although it's difficult to catch at first, it becomes clear upon closer inspection that not only does the mailman’s uniform include a shirt that says “Presto,” but his hat also has a rabbit logo on it.

And then there’s the scene right before Wanda goes into Agatha’s basement — when she first realizes Tommy and Billy’s absence in the house. After noticing Billy and Tommy’s leftovers still sitting on Agatha’s coffee table and a kids show still playing on the TV, Wanda turns to look at both Señor Scratchy and a green bug crawling on Agatha’s window curtains. Since Billy and Tommy are nowhere to be seen, the scene’s emphasis on the two creatures seems to imply that Agnes may have turned the two boys into animals.

If that’s the case, then it’s not out of the realm of possibility for Señor Scratchy to be a prominent Marvel character as well. Whether they were willingly turned into a rabbit by Agatha or not… is another mystery altogether.

The Inverse Analysis — It’s entirely possible that Señor Scratchy is just a fun reference to Agatha’s comic book history on the part of the WandaVision writers, but the Marvel Disney+ show has also made it explicitly clear that nothing is off the table. If Vision can spend most of an episode loopy because a piece of gum clogs up his internal network, why couldn’t Agatha’s rabbit be someone from the Marvel comics in disguise? She is a witch after all — turning people into animals is kind of their thing.