A new foe has appeared

'WandaVision' leak fuels a huge theory about Marvel's next supervillain

“We have fireworks together.” 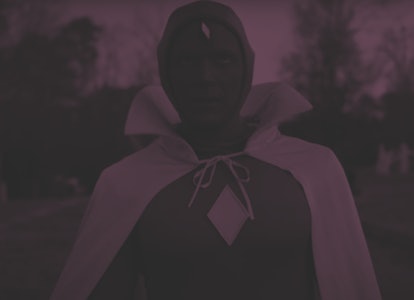 We may be in the middle of WandaVision's run on Disney+, but publicity interviews never rest. Speaking to the cast, the stars and creators of Marvel's new show have gone in-depth on the comics and television shows that inspired the series, but not much about where the show itself is going. Until now.

In a new interview, Vision himself Paul Bettany reveals a major twist coming in WandaVision, and it sounds more than worth the wait.

Speaking to Lights, Camera, Barstool, Bettany was asked point-blank what viewers can expect by the finale. His answer, as per the Marvel protocol, was extremely vague, but there's still something that can be distilled from his cryptic response.

"I think they're going to be massively surprised by the end of the show," Bettany said. "I really think people are going to be like, ‘Oh my God!’ And they’re going to look at the MCU in a whole new light. And also have a much deeper understanding of what direction it’s moving.”

This sounds eerily similar to a lot of quotes surrounding "game-changing" Marvel movies, so it's not that far from the norm. WandaVision is already changing the game by being a Disney+ original series, it's a safe bet there are more surprises in store. However, what Bettany said next was a bit (but not much) more specific.

"I would also say that…so many things get leaked, and people find out about certain things, but there’s this thing that’s been kept completely under wraps that happens," Bettany continued. "And I work with this actor that I have always wanted to work with, and we have fireworks together. The scenes are great, and I think people will be really excited. I’ve always wanted to work with this guy and the scenes are pretty intense."

Who the villain is a huge mystery, but a popular theory states that WandaVision will be the first appearance of Mephisto, the closest thing the Marvel Universe has to the Devil. This demonic character loomed large in the comics, including robbing Wanda and Vision of their twins, Tommy and Billy. Seems like this is just further confirmation of Mephisto's appearance, but who will play him is yet another mystery.

Who will play Mephisto in WandaVision?

A huge casting reveal wouldn't be a surprise, after all WandaVision's cousin show, The Mandalorian, included three huge actor reveals in its latest season. But the fact that this character has "intense" scenes with Vision and hasn't been seen yet probably means the villain of the series — and perhaps more Marvel movies in the future — has yet to make an appearance. We also know it likely won't be a returning Marvel character because the actor is someone he's never worked with before.

Because the villain is yet to make an appearance, it rules out the entire WandaVision cast. But it doesn't rule out all the WandaVision characters. In fact, this reveal provides even more evidence for Mephisto to actually be the oft-maligned and unseen character of Ralph, the husband of nosy neighbor Agnes. Many think his absence is the key to the rest of the series, while others just believe it to be a sitcom running gag. Could Ralph actually be the devil played by a famous actor?

Regardless of who is due in Westview, Paul Bettany hasn't made it easy to speculate. We know the actor is someone he's always admired, but he hasn't worked with before. Could this mean an appearance from one of the handful of A-List actors who haven't been in a Marvel movie, or the reappearance of one who was just in an early phase film? Either way, expect a huge surprise very soon.