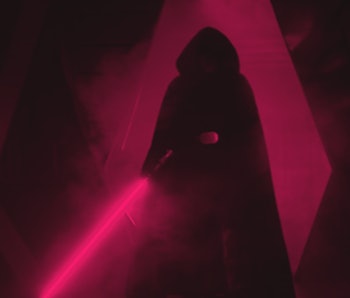 Baby Yoda might become a Jedi after all. Or will he? In the thrilling Season 2 finale of The Mandalorian, the fate of Grogu shifts away from a cozy life with Din Djarin, and suddenly seems fated toward a slightly more rigid life studying how to become a Jedi. But, with the surprise appearance of one very famous Jedi, the story of Mando and Baby Yoda suddenly seems at its end. Then again, certain events in the future of the Star Wars timeline probably tell us that a Mando and Baby Yoda reunion is 100 percent in the sabacc cards for The Mandalorian Season 3. Because of events in The Force Awakens and flashbacks in The Last Jedi, we actually know way more about what happens next than any of the characters do!

This might seem like the end, but maybe, this big Jedi twist is actually just the beginning. Massive spoilers ahead for The Mandalorian Season 2 finale, "The Rescue."

While Cara Dune isn't initially excited about the arrival of one X-wing fighter, let's get one thing straight, that's the X-wing fighter that blew up the Death Star! It's Luke Skywalker! According to the credits, this version of Luke Skywalker is played by none other than Mark Hamill (with Max Lloyd-Jones as body double). That means what we're seeing is a combination of body doubles and clever CGI, not unlike what we saw in the flashbacks in The Rise of Skywalker.

But, once we get over the shock of seeing Luke crash The Mandalorian party, what does this actually mean? It feels very inspiring and appropriate to see Luke Skywalker carrying Baby Yoda with R2-D2 by his side, but can this last? Short answer: No.

If we accept that Baby Yoda goes to live with Luke, and eventually goes to his Jedi school, then we'd also have to accept that he gets killed by Kylo Ren and the Knights of Ren. This feels like something Star Wars fandom can't deal with. How can we be okay with good-boy Ben Solo, if we retroactively learn that he killed Baby Yoda? I mean, Anakin busting out the lightsaber on those unnamed younglings was one thing, but this is Baby Yoda we're talking about here!

Baby Yoda has to quit Jedi school in Mandalorian Season 3

The only way for any of this to make sense is for Grogu to drop-out of Luke's Jedi school sometime before or during The Mandalorian Season 3 (if that's even happening). To keep Baby Yoda out of the terrible path of future-Star Wars history, there has to be a way to get him away from Luke Skywalker. Obviously, Luke is a good person, but the audience is aware of something that Mando isn't: Literally, all of Luke Skywalker's students don't listen to him, and sometimes that means they go on murder rampages.

If Baby Yoda knows what is good for him — and if the Star Wars timeline is to remain secure-ish — he should do what other great Jedi students do when they're told to complete their training: Quit ASAP and run to go find your dad. That's the Skywalker way, right?

The Mandalorian Season 2 is streaming now on Disney+