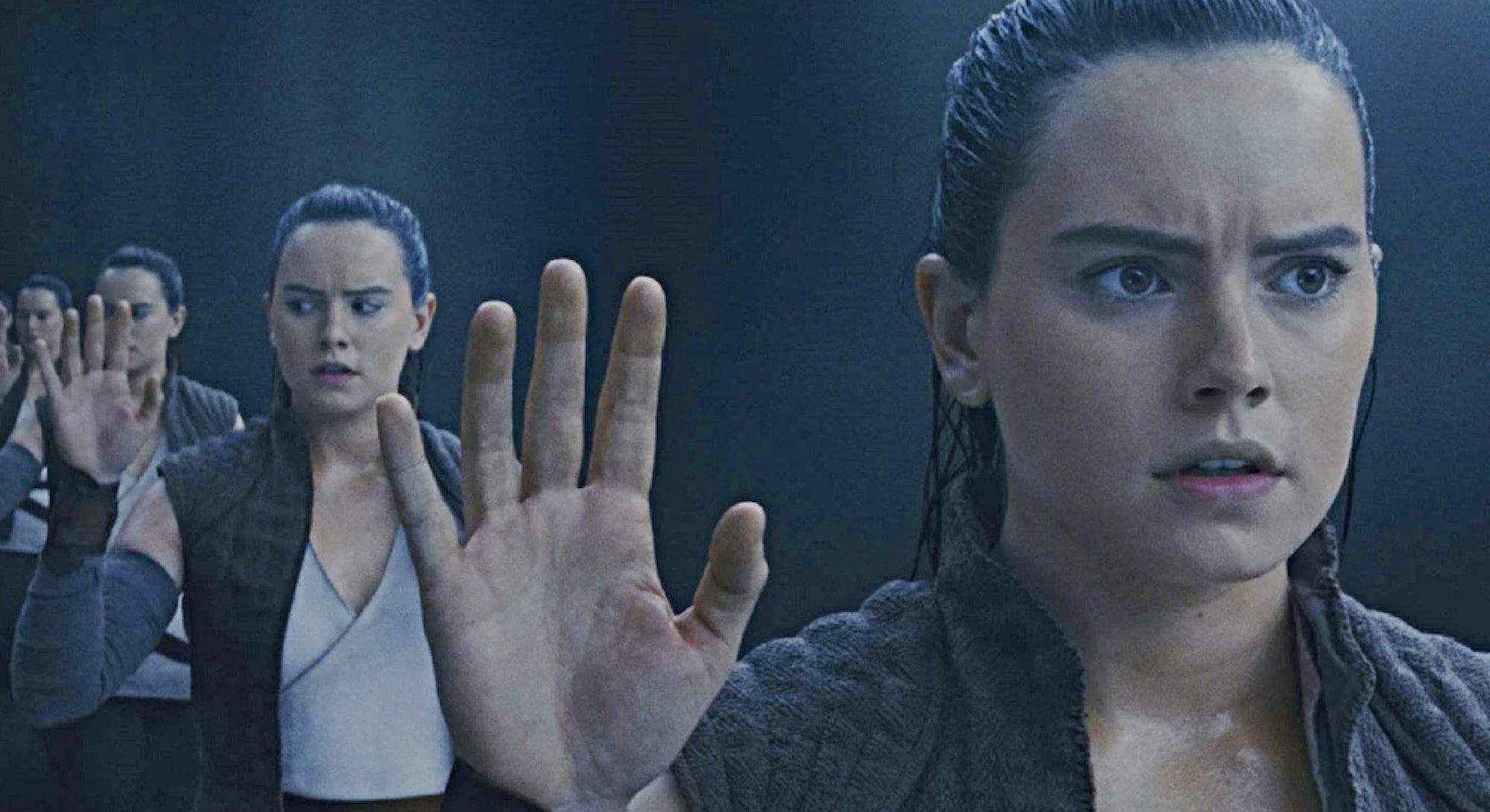 If you find yourself wondering why you can’t stop talking about Star Wars, it’s not your fault. Famously, part of the success of Star Wars is attributed to George Lucas’s careful study of literary scholar Joseph Campbell’s theories about the “monomyth,” the idea that reoccurring archetypes exist in all meaningful stories throughout human history.

The best-known example of these writings is The Hero With a Thousand Faces, which offers up a blueprint for how and why we’re all so obsessed with certain kinds of adventure stories. The archetypal narrative known as “The Hero’s Journey.” is central to Campbell’s argument. Basically, it’s a kind of yardstick for defining and measuring how a narrative taps into issues of broader, deeper cultural significance. Essentially, the appeal of the hero’s journey boils down to what these stories tell us about ourselves.

So, can Campbell’s criteria tell us who is the best Star Wars hero? Who hews most closely to the criteria of the hero’s journey, Rey or Luke Skywalker? While Campbell probably wouldn’t approve of making “The Hero’s Journey” into a game to be won by one character or another, it’s wildly interesting to think about the deeper aspects of Star Wars through this lens. Let the games begin!

As outlined in The Hero With a Thousand Faces, there are 17 steps in the hero’s journey and those are usually broken into three stages — departure, initiation, and return. The first phase has five steps, while the second and third phases each have six. For each step achieved by either Luke or Rey, I’m going to award one possible point. That means 17 possible points in all. For simplicity, I’ll confine each hero to their respective trilogy: Luke to the original films, and Rey to the sequels. (Sorry Anakin, maybe next time.)

Disclaimer: I’m going to summarize the shit out of Campbell here and add my own interpretations, so all you folks with doctorates in mythology, feel free to let me know if I’ve wildly misinterpreted anything. Don’t say I didn’t warn you.

The Call to Adventure, Refusal of the Call, Meeting the Mentor, Crossing the First Threshold, and Belly of the Whale (5 points)

This is the beginning of the adventure, when a humble person gets swept up in a huge story. The call to adventure in A New Hope is when Luke stumbles across the hologram of Princess Leia. For Rey, in The Force Awakens, it’s meeting BB-8 and Finn. This early stage involves meeting a mentor (Obi-Wan for Luke, Han Solo for Rey) and getting past the first threshold.

There’s also a funny thing here where the hero briefly “refuses the call,” which is a moment of hesitation before the adventure really gets going. Luke totally refuses the call. He tells Obi-Wan he’ll only accompany him to Anchorhead, not all the way even to the spaceport at Mos Eisely. Rey also refuses the call, but in a way that is more half-hearted than Luke. She simply tells Finn that she has to “get back to Jakku.” She repeats this to Han later in the film.

There’s also a belly of the whale monster scenario, which happens for Luke in with trash compactor monster and for Rey with the Rathtars.

Both Luke and Rey check all five boxes. So after the first stage, they’re tied.

The Road of Trials, The Meeting with the Goddess, Temptation, Atonement with the Father/Abyss, Apotheosis, and The Ultimate Boon (6 points)

This is where shit gets crazy, in the thick of the hero’s journey. Obviously, a hero must go through trials (one point each for Rey and Luke there), they generally meet some kind of magical creature or goddess (Luke meets Yoda, Rey meets… well… everyone). Then, things get serious.

Both Rey and Luke have some kind of atonement with a “father” figure and achieve apotheosis (another word for a peak of achievement). Two more points for each Jedi.

But what about temptation? This is sometimes called “the woman as temptress,” because old myths are often pretty sexist, and also because at one point in The Odyssey, Odysseus is trapped by Circe the Witch. Temptation is supposed to reveal a character’s a fatal flaw.

With Luke, this moment could be when he goes to the Dagobah cave in The Empire Strikes Back. Or, it could be when he’s tempted to kill his father in Return of the Jedi. But… let’s be honest. Do you really, in your heart of hearts, ever believe Luke was tempted to join the Dark side? His biggest temptation moment actually happens in The Last Jedi, when he considers killing Ben Solo in his sleep. Until this point, squeaky-clean Luke hadn’t truly been tempted in any compelling way.

Rey, meanwhile, is tempted enormously. In The Last Jedi, she clearly considers joining Kylo Ren. In The Rise of Skywalker, she straight-up sees herself as the future Sith Empress. Dark Rey is a much more tempting figure than Luke’s cave vision in Empire Strikes Back, partially because Dark Rey acts as a kind of Biblical serpent, telling Rey something that is essentially true: the Dark Side is totally in our nature. Her romantic feelings for Ben Solo, combined with her possible Sith powers is enough to award Rey a point where Luke falls short.

Luke also fails to get a point for The Ultimate Boon, the moment where a hero obtains some kind of new power. (You could argue Luke learning the ways of the Force in A New Hope qualifies, but since that’s at the beginning of his journey, it doesn’t quite work.) Meanwhile, Rey is imbued with all the powers of the Jedi at the end of The Rise of Skywalker, which feels like a much bigger boon than anything Luke got. So, again, Rey gets a point here, and Luke doesn’t.

At the end of this stage, Rey has six more points and Luke only earns four.

Refusal of the Return, The Magic Flight, Rescue from Without, The Crossing of the Return Threshold, Master of Two Worlds, and Freedom to Live.

Eventually, it’s time for the hero to come back to the “normal world,” but that’s rarely an easy transition. Again, it’s kind of shocking how perfectly Rey’s story matches up with Campbell’s classical steps, and how Luke’s journey falls a bit short. Luke doesn’t “refuse the return” in Return of the Jedi. He gets on a shuttle and flies to Endor. When Rey dies in The Rise of Skywalker, she essentially refuses the return. That’s a point for Rey and zero for Luke.

So what’s “The Magic Flight” about, anyway? Campbell describes it like this:

“If the hero in [their] triumph wins the blessing of the goddess or the god and is then explicitly commissioned to return to the world with some elixir for the restoration of society, the final stage of [their] adventure is supported by all the powers of [their] supernatural patron.”

Remember when Rey said, “I am all the Jedi”? That is some hardcore, crystal-clear magic flight action there. Luke destroying the Death Star in A New Hope with Obi-Wan’s help is a little muddier, but we’ll still give him the point.

Three of the steps in this stage see both Rey and Luke earn points. Both Rey and Luke easily hit the crossing the return threshold; because Luke gets out of the second Death Star (barely) and Rey eventually leaves Exegol. One point each. Then, there’s the idea of getting help from without, which, in Luke’s case, comes from Darth Vader destroying the Emperor. With Rey, it’s Ben Solo, who not only comes and helps her fight the Emperor but also, gives his life force to her to save her. Rey and Luke are also, both arguably masters of two worlds, because they understand both the Light and Dark sides.

The final one, freedom to live, gets a bit more complicated. In Return of the Jedi, it seems like Luke had this freedom. But he’s still living with a huge burden, surrounded by all sorts of instruments of war. Luke looking out at the ghost of Anakin is the opposite of Rey looking at the ghosts of Leia and Luke. Her journey is one of transformation, whereas Luke’s is one of bargaining and reconciliation. The end of Rise of Skywalker sees Rey bury the past and look to the future. She rejects any power her grandfather held over her, while Luke cedes some of his freedom to the past through his attachment to Anakin. If one person has more freedom to live here, it’s clearly Rey.

So, for the possible points for this phase, Luke gets four, and Rey gets all six. That leaves the final hero score looking like this.

In The Power of Myth, Campbell points out that mythological heroes are often styled to reflect the times in which the stories are told. Rey’s decision to honor chosen family over biological family certainly seems on-trend for the 21st century.

Yet, once we delve into the nitty-gritty of the hero’s trials of what Rey does in her Star Wars trilogy, she has more in common with ancient archetypes than her master. This, above all, should be reason enough to think it’s funny she stole his last name. She is, after all, the more traditional definition of a hero.

In other words, Rey’s the faux-Skywalker who out-Skywalked the Skywalkers.