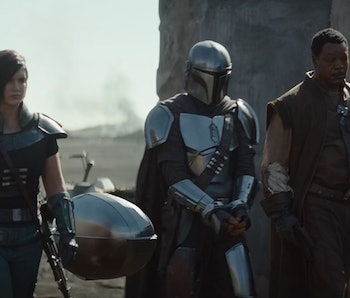 The Mandalorian is not above breaking hearts. Whether it's the tearjerking events of Chapter 14, "The Tragedy" or the sacrifice of fan-favorit characters in Season 1, there's no telling what will happen next in Din Djarin's adventures with his young green ward. With the Season 2 finale mere hours away and the situation between Mando and Moff Gideon tense, there's no way to know who will make it out unscathed.

Unfortunately, a new leak of the episode's score hints at potential sorrow to come. Possible spoilers ahead for The Mandalorian Season 2 finale.

Redditor AdamDriverIsAwesome found a fan forum dedicated to the works of iconic Star Wars composer John Williams where musically-minded Star Wars fans had used Shazam to find the titles of the upcoming release of the original score for The Mandalorian Chapters 13-16. Most of these tracks are easily explained away. "Ahsoka Lives" is obviously about Ahsoka Tano's live-action debut in Chapter 13, "The Seeing Stone" about Grogu's meditation on Tython in Chapter 14, and "Brown Eyes" about Mando having to remove his helmet in the Imperial base on Morak.

However, the most interesting tracks are the ones that can't be delineated to one episode or another. "The Sword" doesn't reveal much, we already knew a big Darksaber moment was probably coming at some point this season. "Activate" is also very vague, but could allude to the darktroopers Moff Gideon activated to capture Grogu earlier. They only had a small role in Chapter 13, so we'll probably see the full range of their powers in Chapter 16.

The most interesting track in the list is simply titled "Rest in Peace." There haven't been any shocking deaths so far this season, so this track is probably for a moment in the upcoming finale. The million-dollar question is: who is Resting in Peace?

The most obvious (and, perhaps, most optimistic) answer is Moff Gideon. After all, the game of cat and mouse he's been playing with Mando is about to reach its boiling point, and now even Bo-Katan Kryze is in on the hunt, determined to be reunited with her Darksaber. However, with Season 3 already in pre-production, eliminating the big villain only two seasons in would be a risky move.

The other possibility is that an ally of Mando's will lay down their life to assure Grogu is reunited with Mando. Last season, those sacrifices were Kuiil and IG-11. This year, it could be anyone, excluding Mando and Grogu, the heart of the show. The least tragic choice would be sharpshooter Fennec Shand, only because we've seen her "die" once before, and we already know she'll be returning (as a younger version of herself) for upcoming animated series The Bad Batch.

No matter who dies, their death will affect the course of the show as we know it, whether it means Bo-Katan being reunited with her birthright weapon or Mando paying a dear price to bring his Clan of Two together again.