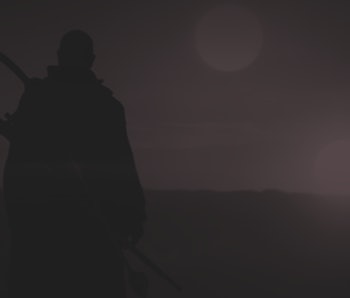 Din Djarin has returned to Luke Skywalker's home planet of Tatooine in an attempt to find a surviving Mandalorian. Djarin hopes this other Mando will help guide him through an underground network and reunite "The Child" with his people. But, little does he know that this other Mandalorian has a secret...

The Mandalorian Season 2 doesn't have an opening text crawl like the episodic Star Wars films, but if it did, you can easily imagine that description in floating yellow letters, fading into a starfield as you read. The first episode of The Mandalorian Season 2 is here, and the biggest revelation was easily about another, very famous Star Wars character who also wears Mandalorian armor. Here's where "The Marshal" in the newest Mando adventure got his slick outfit.

Warning! Massive spoilers ahead for The Mandalorian Season 2 — Chapter 9, "The Marshal."

Although the ending of "The Marshal," boasts a pretty big revelation for hardcore Star Wars fans, this episode gets right down to business with a Sarlacc-sized Easter egg. When Mando hits up the forgotten Tatooine Minning Town of Mos Pelgo, he encounters the town's Marshal, Cobb Vanth (Timothy Olyphant), who, yes, is very much wearing the armor of Boba Fett. Cobb Vanth, of course, is not a Mandalorian, and Mando wants to know how this guy got the armor. Answer: He bought it from some Jawas.

Okay, but how did the Jawas get it? Well, this part requires a little dot-connecting. If a Jedi mind trick has made you fuzzy on the events of Return of the Jedi; the last time we saw the bounty hunter named Boba Fett, he was flying to his doom in the Sarlacc Pit on Tatooine. Although Boba Fett's status as a true Mandalorian is fuzzy — his father Jango Fett had shady allegiances and Fett was a clone — he was still the very first person to wear Mandalorian armor in Star Wars, ever. And yes, although Mando already has about a billion times more screentime than Boba, we wouldn't even be here without Boba Fett. Up until this episode, official Star Wars canon had held fast to the idea that as of 4 ABY (the year Return of the Jedi takes place) Boba Fett was certainly dead.

Cobb Vanth — the man wearing Boba Fett's armor — is a character lifted from the 2015 novel Star Wars: Aftermath by Chuck Wendig. In theory, Cobb Vanth was always real Star Wars canon (most Star Wars books post-2014 are) and his backstory relative to having Fett's armor is pretty much the same here as it was in that book.

When Cobb Vanth initially reveals he's rocking Boba Fett's armor, it seems like yes, Boba Fett is clearly still dead. The Jawas have Boba Fett's armor because they salvaged it from the Sarlaac Pit, and the only way Fett could have been parted with his armor is if he was dead, right?

Throughout the events of "The Marshall," this is the assumption you have to go with. Although there had been rumors of Boba Fett returning, Cobb Vanth's reappropriated armor feels like the final word on Fett's fate. That is, up until the very last shot of the episode. As Mando and Baby Yoda ride away into the binary sunset, a robed figure with a few Tusken Raider gaffi sticks on his back turns toward the camera. Yep! That's Temuera Morrison, the actor who played Jango Fett in Attack of the Clones, and later, dubbed the voice of Boba Fett in the 2004 "Special Editions" of the classic Star Wars trilogy. Although we never saw Boba without his helmet in the classic films, he would have to look just like Jango since he was a clone of his father.

This means the man we're seeing in the final shot of "The Marshal" is almost certainly Boba Fett. He didn't die in the Sarlacc Pit after all, and clearly, has been living in the dune seas of the Tatooine desert for at least five years. It seems very unlikely that we'd get a glimpse of Boba Fett at the end of "The Marshal," and then never see him again for the rest of the season. So, if it's a good bet that Boba Fett will be back in The Mandalorian Season 2, and when he returns, we might finally figure out what his policy was when it came to "The Way."

The Mandalorian is airing new episodes on Fridays on Disney+.