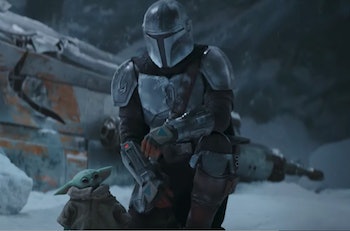 The new season of The Mandalorian is all about Mando figuring out which Jedi are responsible for Baby Yoda. That means there's no question we'll be seeing some Jedi in Season 2 — it's only a matter of when. The new trailer has given us a glimpse of one possible Jedi (or Sith??) who might tango with Mando later in the season.

But the bigger question might be an obvious one. Will Luke Skywalker appear in The Mandalorian Season 2? Does this trailer already hint that a cameo from Master Luke is not just likely, but unavoidable?

First things first. The new trailer for The Mandalorian Season 2 does not, in any way, shape or form reveal Luke Skywalker. I have not watched a different trailer than you. I have not played the trailer backwards and heard the ghost of Anakin tell me that Palpatine is alive. Even so, I do think the trailer points toward a possible Luke cameo – or Luke Skywalker-centric discussion – at some point in Mandalorian Season 2. Here are three reasons why.

3. The trailer frames the new Mando season as a hunt for the Jedi — The trailer begins with the voiceover from the Armorer, telling Mando he has to reunite Baby Yoda with the Jedi. We then see a mysterious person (probably not Ahsoka) vanish in a very sneaky, Jedi-ish fashion.

The message here is pretty clear: Mando is going to actually try and do this, which means he'll encounter Jedi (or former Jedi like Ahsoka Tano) at some point in this season. If Mando meets more Jedi, that means somebody, at some point, should be talking about Luke Skywalker, who is, as far as most people know, the only legit Jedi around at this point in time.

2. Luke Skywalker's activities in 9ABY — The Mandalorian is set only five years after Return of the Jedi, or 9ABY on the Star Wars timeline. This means Luke is at least two decades away from becoming disillusioned with the Jedi and going into exile.

What is he doing at this point in time? Well, it's possible that the Jedi-fact finding mission that Lando mentioned in The Rise of Skywalker could be happening during these years. We also know that Luke was looking for Sith Wayfinders after Return of the Jedi. It's also possible that Luke is getting prepared to actually start up his new Jedi academy. In any of these scenarios, in the current canon, we don't know exactly what Luke was doing at this time, but all his movements were connected to Jedi research. (Or as his dad might say "Jedi business. Go back to your drinks.")

In 4 ABY (Return of the Jedi) someone who looks exactly like a super-old Baby Yoda (Yoda) said to Luke: "When gone am I, the last of the Jedi will you be." Then Old Yoda died. Mandalorian happens five years later. So, who, at this time, is the expert on things that look like Yoda and also the Jedi? Yeah, that's right. It's still Luke Skywalker.

1. X-wings — Okay, so Luke is probably not flying one of the X-wings that pull-up on the Razorcrest in the new Mando trailer, but what if he was? Luke was still flying his original X-wing around the time he went into exile, which was roughly 28 ABY. So, in 9 ABY, Luke is almost certainly still using his OG X-wing to hop around the galaxy.

I'm not saying Luke is in one of the X-wings that is following Mando and Baby Yoda in this trailer, but then again, it's very possible that he is. Countless in-canon comics and novels (including the Kylo Ren Marvel comics prequel series) have frequently pointed out that Luke Skywalker thinks of himself as "the last Jedi" for several decades. Only five years after the Battle of Endor, Luke certainly still thinks this way.

Would he hop in an X-wing and chase down Mando to figure out the mystery of Baby Yoda? When you think about it like that, it's almost weirder if Luke isn't involved with this season.

The only real question about a Luke Skywalker appearance in The Mandalorian is simple: Is it an audio cameo? A visual cameo? Is Luke CGI like he was in The Rise of Skywalker flashback, or is he recast?