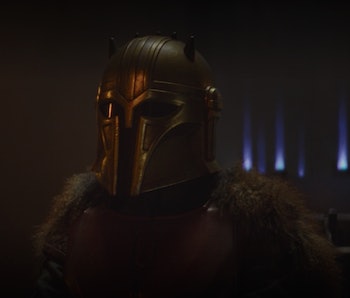 Just like the Marvel Universe has vibranium, the Star Wars universe has Beskar steel. But, if you were confused by the importance of Beskar steel in the very first episode of The Mandalorian, that’s totally understandable. Beskar steel is a big deal for the Mandalorian culture, but most of the references and explanations come from Rebels and The Clone Wars, animated series that mainstream fans may not have watched

Here’s what this stuff is and why it matters so much on the new Disney+ series, The Mandalorian.

Lights spoilers ahead for The Mandalorian, Chapter 1.

Before it was given the name “beskar,” Mandalorian iron and properties of Mandalorian armor were mentioned in the Dark Horse Comics Tales of Jedi series. Later, Star Wars novelist Karen Traviss outlined a ton of the Mandalorian culture in an article for the Star Wars Insider magazine called “The Mandalorians: People and Culture.”

Though this entire “non-fiction” article isn’t entirely canonical, many details, including the word “beskar,” originated there. So yes, one of the primary plot points of The Mandalorian was basically invented in 2006 for a magazine piece.

In The Clone Wars and Rebels

In terms of real-deal contemporary Star Wars canon, beskar is a much bigger deal in The Clone Wars and Rebels.

In The Clone Wars, a ton of Mandalorians wore Beskar steel as armor, but much of this was eventually co-opted by Darth Maul when his criminal syndicate briefly took over the planet Mandalore. So, when Maul appears in Solo, there’s a very real chance he’s still dealing in Beskar.

In Rebels, resident Mandalorian Rebel Sabine Wren actually helped the Alliance make a superweapon out of Beskar. In the episode “Heroes of Mandalore,” Sabine uses this weapon in a mission to try and free her father from Imperial clutches.

What does it mean for The Mandalorian?

In Chapter 1 of The Mandalorian, the Imperial (Werner Herzog) who sends Mando on the mysterious bounty offers him a payment of Beskar, and promises him more if he delivers the bounty.

When we learn that the Mando is just one of many Mandalorians living in hiding, bringing this scrap of Beskar back to his people is a pretty big deal. The Mandalorian who is in charge of the forge mentions that much of the Beskar was lost in the “great purge,” which probably means the Jedi purge, but also possibly could refer to Darth Maul taking over Mandalore, or something else entirely.

The point is, the Beskar has specific value to the Mandalorians; it is a literal part of their culture.

This makes the titular Mandalorian a lot different than Boba Fett. Though Fett wore the armor of the Mandalorian people, he was a loner. Had Fett had obtained more Beskar, he would have kept it to himself. So, right off the bat, the way Beskar is treated in this series gives the titular bounty hunter a sense of purpose, and even more importantly, a moral compass.

The Mandalorian Chapter 1 is streaming now on Disney+.