'WandaVision' post-credits scene: We finally got one. Here's what it means. 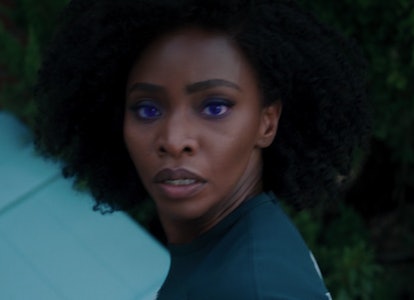 After six weeks of suffering through the credits with nothing to show for it, Marvel fans finally got what they wanted in WandaVision Episode 7: a post-credits scene. (Well, technically a mid-credits scene, but who has the patience to sit through all those credits anyway?)

While it may have seemed like a relatively minor moment, it's actually way more important than you think. Here's why. Warning! Spoilers ahead for WandaVision Episode 7.

At the end of WandaVision Episode 7, "Breaking the Fourth Wall," we finally learn what many Marvel fans have suspected for weeks: Agnes is actually Agatha Harkness, a witch from the comics who shares a long and complicated history with Wanda Maximoff. Based on comic book history, Agatha isn't technically a "villain," but from what we see in this episode, it certainly looks like she's the show's big bad.

Episode 7 ends with a new theme song titled "Agatha All Along" that shows all the ways Agatha has been controlling the events of WandaVision. The biggest reveal? She was behind Pietro's return, literally controlling him with magic the entire time. The implication seems to be that Wanda's brother isn't real at all, which explains why he's played by the wrong actor, but there's more to it than that.

After the initial credits, WandaVision cuts back to Episode 7 to show Monica discovering Agatha's creepy basement. She prepares to enter, but suddenly "Pietro" shows up for the first time this episode to stop her while delivering the bizarre phrase, "Snooper's gonna snoop."

We have to assume Agatha is still controlling him. The question is: how much control does she have?

When Evan Peters first showed up, Agatha was apparently nearby using her magic to control his every move. However, in Episode 6, she was somewhat occupied sitting in her car on the edge of town waiting to meet Vision. That means Pietro was either being controlled from a distance or he's on autopilot. Either way, Agatha wasn't particularly busy in Episode 6, but she's a lot more occupied in Episode 7.

What's my point? Well, if Agatha is busy doing whatever she's about to do to Wanda at the same time that Monica meets Pietro, that raises a crucial question: How powerful is Agatha Harkness, especially when it comes to arguably her most dangerous weapon, Pietro?

Now that WandaVision has its supervillain, it won't be long before we find out the terrifying limits of Agatha's witchy powers. And based on the Episode 7 post-credits scene, they could be far beyond anything we've seen so far.

More like this
Entertainment
Jan. 25, 2023
The MCU could bring back a hero from its most underrated TV show
By Dais Johnston
Entertainment
Jan. 13, 2023
Mike Colter would "entertain" the idea of coming back to Luke Cage
By Hoai-Tran Bui
Entertainment
Jan. 12, 2023
Harry Styles’ Eros is returning to the MCU — but why?
By Eric Francisco
LEARN SOMETHING NEW EVERY DAY.
Related Tags
Share: