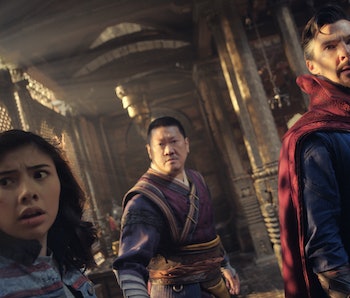 Comic book fans have known for a while now that Doctor Strange in the Multiverse of Madness will connect to several other Marvel Cinematic Universe titles, including Spider-Man: No Way Home and WandaVision. The film’s ties to those projects have already been made official by Marvel, and the studio has gone out of its way to tease the movie’s possible connections to unexpected MCU titles too, like Deadpool and What If…?

Marvel fans have also long suspected that Multiverse of Madness will reference, in some form or another, the events of Loki Season 1. Given how much Loki did to set up and explore the multiverse, it’s not hard to see why fans believe that Multiverse of Madness will share some connection to it. However, it looks like that might not actually be the case.

The Leak — In a recent tweet, the Marvel insider known as MyTimeToShineHello claimed that “no one from Loki is in Doctor Strange 2” as far as they know. They’ve tweeted out several leaks in recent months that have turned out to be true, along with others that have yet to be disproven.

So while this claim should still be taken with a grain of salt for now, there is reason to believe it might be accurate. If it is, Loki fans may want to prepare themselves to be disappointed by Multiverse of Madness.

Different Corners of the Multiverse — When Loki Episode 6 concluded with the introduction of Kang the Conqueror (Jonathan Majors) and the fracturing of the multiverse, most Marvel fans understandably assumed that the consequences from the show’s Season 1 finale would be immediately felt in a number of other MCU projects. But that hasn’t proven to be true.

It’s partly for that reason that many Marvel fans assumed Multiverse of Madness would finally kick off the MCU’s post-Loki era. The upcoming film’s deep dive into the multiverse opens the door for it to not only address the events of Loki’s finale, but also feature cameos from the Disney+ show’s characters. For a while, some Marvel fans even believed they could see a TVA time portal in one of the early trailers for the Doctor Strange sequel.

Now, with only a few weeks to go until Multiverse of Madness’ release, it looks like the film may not be the long-awaited Loki follow-up Marvel fans have wanted. That doesn’t mean Multiverse of Madness won’t still be a major event film for the MCU, or that it won’t connect to multiple Marvel films and TV shows. It does, however, suggest that the events of Loki’s Season 1 finale may be more contained than fans had been led to believe.

The Inverse Analysis — Marvel has confirmed a lot about Doctor Strange in the Multiverse of Madness in recent months, but most MCU fans believe the film still has plenty of surprises hidden up its sleeve. That said, whether any of the film’s cameos and MCU twists connect to Loki Season 1 or Kang the Conqueror remains to be seen.

All this alleged leak does is raise the possibility that Multiverse of Madness’ connections to Loki may not be nearly as explicit as Marvel fans have hoped they’d be.

Doctor Strange in the Multiverse of Madness hits theaters on Friday, May 6.