'Doctor Strange 2' theory reveals how it sets up 'Avengers 5'

“Just wait till you meet my variants.” 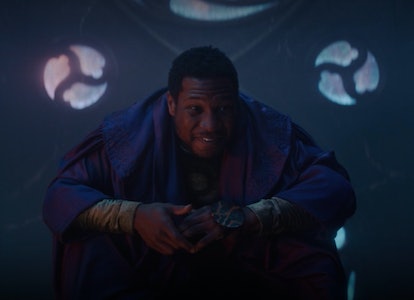 There’s a lot of speculation surrounding the cast of Doctor Strange in the Multiverse of Madness, and it’s not hard to see why. In addition to bringing together some of the Marvel Cinematic Universe’s biggest characters, the film is set to feature a number of high-profile cameos from recognizable stars like Patrick Stewart and Hayley Atwell. Marvel fans are therefore going a little bit, well, mad with theories about the Doctor Strange sequel.

That said, one compelling new theory about Multiverse of Madness may reveal the surprising identity of a mysterious character from the film’s latest trailer. If correct, the theory could also shine some light on the unexpected role that a Kang the Conqueror variant will play.

A Mysterious Figure — In the second trailer for Multiverse of Madness, there are two very brief shots of a glowing figure flying through debris and engaging in a fight with a version of Wanda Maximoff (Elizabeth Olsen). The figure’s face is obscured, making it impossible to determine their identity. Nonetheless, their appearance has sparked numerous fan theories.

Some fans believe the character is a variant of Captain Marvel, possibly one played by Maria Rambeau actor Lashana Lynch, while others think the figure is a version of Superior Iron Man played by Tom Cruise. Both possibilities open the door for Multiverse of Madness to show viewers a new and unique alternate reality.

However, Screen Crush reports that an 8K version of the Multiverse of Madness trailer makes the figure’s face much clearer, revealing them to be someone who looks a whole lot like Kang the Conqueror actor Jonathan Majors. The outlet speculates that the glowing figure could very well be a character reminiscent of a Kang variant from the comics known as Iron Lad.

Iron Lad in the MCU — In the comics, Iron Lad is a version of Kang the Conqueror who, horrified by his future self’s actions, goes back in time in the hopes of becoming a hero. He forms the Young Avengers and does a lot of good as a member. Unfortunately, he suffers a loss that results in him embarking on a path toward villainy.

As his moniker suggests, Iron Lad wears armor that’s designed to resemble Tony Stark’s Iron Man suit. Much like Tony, the character also has a genius-level intellect, so there’s definitely a chance that Iron Lad could exist as an Iron Man-esque figure in one of the MCU’s alternate timelines. That, in turn, raises the possibility that the Ultron bots shown in the Multiverse of Madness trailer may not have been created by a variant of Tony Stark, but by Kang the Conqueror.

If that’s the case, the glowing figure in the Multiverse of Madness trailer may not only be a heroic variant of Kang, but one who’s also a member of the Illuminati. Given his intellect and resourcefulness, Iron Lad would make sense as a member of a group that counts Professor X as its leader.

And with Marvel bringing so many members of the Young Avengers into the MCU right now, an appearance from Iron Lad in Multiverse of Madness could be all the studio needs to set the stage for the comic book team’s on-screen formation. In fact, it’s possible the events of the Doctor Strange sequel could be what inspire the heroic Kang variant to put together a version of the Young Avengers in, say, Avengers 5 — or whatever Marvel ends up calling it.

The Inverse Analysis — The Loki Season 1 finale explicitly sets up the introduction of multiple Kang the Conqueror variants in the MCU, which means Jonathan Majors’ next Marvel appearance may come sooner than fans think. But whether his MCU return involves him playing a version of Kang’s Iron Lad from the comics remains to be seen.

But of all the projects Marvel has in the works right now, none feel quite as primed to introduce new Kang variants as Multiverse of Madness, a film set to explore multiple MCU timelines. So if Marvel really does plan on bringing multiple Kangs to life, then Multiverse of Madness is the film that can actually kickstart that process.