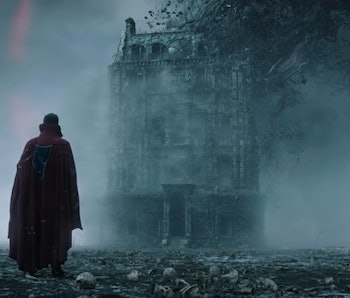 Fans have known for a while now that Doctor Strange in the Multiverse of Madness will do things that no other Marvel Cinematic Universe film has done before. However, few could have predicted just how many bold decisions Marvel Studios has chosen to make with the new superhero film, which promises to dive headfirst into all of the weirdest corners of the MCU’s multiverse.

The film’s latest trailer only further proved just how, for lack of a better term, strange Multiverse of Madness is going to be. The well-received teaser contains several truly game-changing, mind-bending moments, including one blink-and-you’ll-miss-it detail that reveals one of Multiverse of Madness’ biggest surprises.

Enter a New Dimension — The second trailer for Doctor Strange in the Multiverse of Madness isn’t lacking in beautiful, psychedelic visuals. That said, there’s one particular moment in the trailer that Marvel fans are latching onto and losing their minds over online.

The moment in question comes near the trailer’s 1:25 mark and shows Doctor Strange (Benedict Cumberbatch) and America Chavez (Xochitl Gomez) falling from a dimension populated by dinosaurs into one that is, well, animated. While the scene happens very quickly in the trailer, the animated dimension looks like a comic book come to life, with Strange even turning into an illustrated version of himself as he falls into it.

Strange Gets Animated — The fact that Multiverse of Madness will feature a scene in which two of its lead characters travel into an animated world is exciting for a few different reasons. For starters, it’s an undeniably exciting visual idea, with the inclusion of an animated sequence adding yet another layer to a film that is already proving to be Marvel’s trippiest title to date.

Beyond that, the sequence’s existence proves that Marvel Studios isn’t afraid of blending its animated and live-action worlds. That opens the door for the studio to have characters from its animated films and TV shows, like What If…?, appear in live-action titles and vice versa.

It also means Marvel could be open to letting certain MCU characters appear in animated form in something like Spider-Man: Across the Spider-Verse. That Sony animated film is already rumored to feature a few surprise MCU cameos, but this Multiverse of Madness detail makes those rumors seem a little bit more plausible.

The Inverse Analysis — With every new detail and piece of footage released, Doctor Strange in the Multiverse of Madness becomes more interesting of a project. That’s true of the recent confirmations that it’ll introduce a version of the Illuminati and bring Professor X (Patrick Stewart) into the MCU. The same goes for this unexpected reveal.

After all, who could have predicted six months ago that Multiverse of Madness would feature an animated sequence? At this point, it seems like Marvel is only a few steps away from making an MCU version of Who Framed Roger Rabbit.

To be fair, that’s probably something a lot of comic book fans want to see happen, and we don’t blame them.