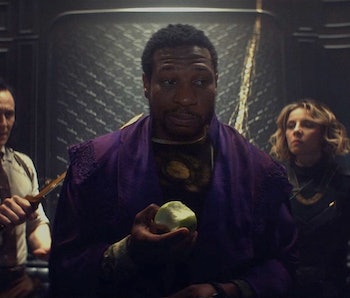 Loki’s grand finale had written itself into a corner.

Not revealing a villain five episodes into a six-episode series would have been worrying enough. But on top of that, Marvel fans were already speculating about Kang the Conqueror’s introduction as if it were as inevitable as Thanos.

Of course, Loki still managed to subvert expectations by simultaneously introducing and not introducing Kang the Conqueror — thanks to more multiversal shenanigans.

The move was a narrative masterstroke that went against all previous indications of how fans thought the finale could disappoint. It wrapped up Loki’s journey while setting up a second season — and the next phase of the Marvel Cinematic Universe as we know it. Here’s how Loki pulled it off.

Loki’s main issue going into its finale is easily explained by pointing to its two predecessors: WandaVision and The Falcon and the Winter Soldier. The former series treated Mephisto the same way Loki treated Kang, setting up countless consequences for his rumored introduction. But WandaVision came and went without so much as a glance at Mephisto, disappointing fans who’d pinned all their hopes on that villain reveal.

Then came The Falcon and the Winter Soldier, which laid the groundwork for another major reveal: that of Sharon Carter as the Power Broker. While the fanbase braced for that twist to be another red herring, it was ultimately revealed and still somehow felt like the most obvious answer to that series’ mystery.

So Loki had to thread the needle between an obvious reveal and an unexpected reveal. It’s a tall task, but Marvel pulled it off perfectly.

Have your Kang and eat it, too

When Loki finally revealed that the being residing in the Citadel at the End of Time was “He Who Remains,” it appeared the series was paying homage to the original creator of the Time Keepers. Then, the real reveal arrived.

“He Who Remains” was played by Jonathan Majors, who is already confirmed to debut in the MCU as Kang the Conqueror two years from now in 2023’s Ant-Man and the Wasp: Quantumania.

When many critics, this author included, were first predicting who might be behind the TVA, it was easy to immediately discount Kang — purely because it had already been confirmed he was meant to be introduced in a future film. Why would Marvel tease that he would be introduced in Quantumania if he were intended to appear in another Marvel property first?

The ingenious solution to Marvel’s long game with Kang is that the variant we saw in Loki wasn’t Kang at all. In fact, the name “Kang” wasn’t even mentioned. Instead, the character was referred to as “He Who Remains.” Kang presumably lurks among those variants who didn’t remain, ready to take over the TVA once Sylvie liberates the multiverse.

Yes, this is a solution full of technicalities, but it made many fans happy. For those who’d wanted Kang, the series featured a Kang variant and the promise of much more ahead. For those who wanted literally anyone else to be behind the show’s central mystery, He Who Remains was technically his own threat — and, what’s more, one inspired by the comics.

After six episodes of opposing binaries (Loki vs. Sylvie, the Lokis vs. the TVA, one group of variants vs. another), Loki left off on one final paradox: Kang, but not Kang. It’s the only way a series like this could have ended. Thankfully, Marvel finally figured that out.