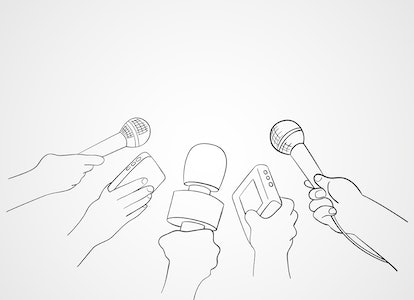 Erling Haaland gave an eight-word interview last year. He’s one of the best young soccer players on the planet but showed his humanity in that viral moment. After winning the Champions League final last weekend, Timo Werner told the reporter he didn’t care about the question. Why should he? It was bad and obvious; salty bait for A Good Quote.

Then there are the questions that were asked of Naomi Osaka. The 23-year-old phenom was born in Japan and has been living in the US since the age of 3, training to become a top-ranked player. As an introverted person, I identify with her apparent discomfort at answering bad-faith questions, and she’s faced some very tough ones. Just like, to use a cliché, clown questions. I’m sorry to my fellow journalists who defend the privilege to ask provocative questions, but most post-game queries are garbage.

Meant to draw out the humanity from an athlete who’s just undergone one of the most stressful professional moments in their life, these questions just come off as tone-deaf to us and hurtful to the young athlete at the mic. Here are two from 2019 mentioned in a new Vice story that focuses on the media aspect of Osaka’s story:

So, like, those are obviously very tough questions to answer. They are the sort of questions you build to at the end of a long, several-day period with a source who has earned your trust. If you coldly ask them in a press conference, you are an asshole and a thoughtless reporter. At 23, Osaka is an adult who has achieved so much, but also, as somebody who was also 23, those kinds of questions can haunt a person. This is to say nothing of the history of racist questions (asking Black athletes how they spend their money) or sexist ones, like the one Maria Sharapova faced at age 17: “You’re a pin-up now, especially in England. Is that good? Do you enjoy that?”

As you might have guessed, Osaka refused to take questions after her match and was fined by the organizers of the French Open. Then she dropped out of the tournament completely. (Each subsequent refusal would mean another $15,000 fine.)

But Osaka’s story is applicable to all of us in our lives, too. It’s the subject of our lead story in today’s Inverse Daily. I’m Nick Lucchesi, an editor for Inverse, where we aim to mix science and culture to make you a little smarter about your world.

Mailbag — Let us know about your weirdest dream that involves flying. We’ll publish our favorites in a week or so. Reply to this email if you’re reading this on email. If you’re reading on the web, send your story to newsletter@inverse.com.

This is an adapted version of the Inverse Daily newsletter for June 3, 2021. Subscribe for free and earn rewards for reading every day in your inbox.

Naomi Osaka: What a psychiatrist says we can learn from the tennis champ — While our workplaces might be very different from that of tennis star Naomi Osaka’s, experts say our mental health is no less important for us than it is for her. Katie MacBride offers the full scope in her latest story:

Naomi Osaka, the four-time Grand Slam tennis champion, withdrew from the French Open on Monday. Experts say her reasons should be a wake-up call — not just for the sports world, but for everyone.

Last month, ahead of the start of the French Open, Osaka announced she wouldn’t be doing press conferences at the tournament, saying in a now-deleted Instagram post that press conferences can be damaging to players’ mental health. Too many times, she felt like journalists were “kicking a person while they are down,” Osaka wrote.

After winning her first match at the Open on Sunday, Osaka made good on her word.

Look: Here's the best place for humans to live on Mars — Arcadia Planitia, located in the northern hemisphere of the Red Planet, holds promise as a habitable, resource-rich area for space civilizations. It’s the latest stunning card story by Jenn Walter:

If space moguls like Elon Musk have their way, the Red Planet could one day be home to millions of people. But where’s the best place to build a civilization on dry, dusty Mars? One of the top contenders is a region called Arcadia Planitia.

Read the full story and see the images.

Why is NASA sending 2,000 water bears and 128 squid to space? — The 22nd SpaceX cargo resupply mission will carry 5,000 tardigrades and 128 symbiotic squid to the ISS to study the effect of space travel on the human body. Why? Passant Rabie has the answers:

As if the world wasn’t big enough for microscopic animals, the tiniest of creatures are taking on even bigger frontiers in space.

On June 3, SpaceX is launching its 22nd cargo resupply mission to the International Space Station (ISS). While the cargo includes equipment for ongoing experiments and new solar panels, it also has a few passengers: 5,000 tardigrades, also known as water bears, and 128 baby glow-in-the-dark bobtail squid.

These tiny animals are venturing out into space for good reason: helping researchers understand the effects of spaceflight on the human body. This type of research has gotten more crucial as space agencies target further destinations such as Mars for the future of space travel.

Related reporting on NASA and SpaceX:

Sperm — or more accurately, the lack thereof — has seeped into the American consciousness, and people are worried (although perhaps not for the reason you might think).

The sperm count of men in Western countries is, so the story goes, in decline — perhaps irrevocably. The prostate panic truly kicked off in 2017, when a Newsweek cover asked: “Who’s killing America’s sperm?” That story, and much of the ensuing dialogue around men, fertility, and sperm counts, was based on a research analysis that estimated changes in the global sperm count over time.

BMW's new electric SUV is the eye-popping car of the future — BMW has been teasing this car for seemingly forever and it's finally here, a 300-mile SUV that portends an exciting new future for the brand, reports Jordan Golson.

BMW has been teasing the iX for years, and it's finally here: a 300-mile EV that portends an exciting new future for the Ultimate Driving Machine.

BMWs signature kidney grille is front and center (literally) on the iX. You can’t miss it. But it’s more than just aesthetics. The front-facing radar is hidden behind the grille and a camera tucked between the kidneys, too. The camera even has its own cleaning system.

See all the stunning images.

It was a big day for BMW. Here’s what else you should know:

Edible candy models could become the new way we learn — Researchers made 3D-printed, candy-sized models of proteins and asked students to identify them with their mouths. It’s the big idea illustrated by Jenn Walter:

When you think of school, memories of reading textbooks and watching educational videos might come to mind. But what if instead of seeing, you could taste the lesson instead? That’s what one group of students did for a study published in the journal Science Advances. Researchers made 3D-printed, candy-sized models of proteins and asked some of the students to identify them with their mouths.

Go deeper into how learning happens:

Can dogs talk to you? The science behind canine communication — To suss out whether dogs can talk to humans, we spoke to pet experts to answer your biggest questions — including whether your pet dog really understands you. Tara Yarlagadda reports on this eternal question:

Earlier this year, speech pathologist Christina Hunger’s research went viral. Hunger had made a stunning advancement in the science of speech and communication. But her groundbreaking work wasn’t in humans; it was dogs. Specifically, her dog, Stella.

Essentially, Hunger taught Stella to answer basic questions using a board fitted with buttons that, if pressed, correspond to different words Stella might find useful, like “water” or “outside.”

Hunger’s pet dog isn’t the only one able to “talk” to their humans with the assistance of these devices. Among the most famous “talking” canines are Bunny, the TikTok dog, and another pup that used the board to curse at its owner when it was denied a treat.

Learn more about the world of dogs: