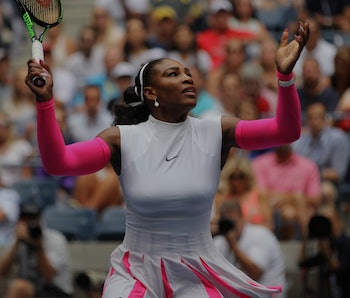 It’s official: Serena Williams has dropped out of the French Open because of an injury to her right pectoral muscle. While no one has pinned down the exact cause of Williams’ injury, she had already reported feeling a twinge of pain earlier in the tournament, during her third-round victory over Germany’s Julia Görges on Saturday. Close-eyed fans might have seen it coming.

She’s been managing the pain since Sunday using different configurations of kinesiotape, athletic tape designed to limit over-contraction that can make muscle injuries worse. “I tried a lot of different tapings, and I tried lots of different types of support to see how it would feel under match circumstance,” Williams said in a press conference on Monday. “Right now, I can’t actually serve.” To serve like Williams requires immense muscular ability: In the first matches this weekend the ball speed hovered between a blisteringly fast 81 and 87 miles per hour (mph), and even that was a step down from the 110 mph she had achieved earlier on, according to ESPN. To make a tennis ball move like that, she is using a chain of muscles from her feet to her chest that all work together in eight stages.

In a study published in Sports Health in 2011, a team of researchers led by exercise physiologist Mark Kovacs, Ph.D. outlined the three phases of a tennis serve — preparation, acceleration, and follow-through — and the array of muscles involved. They showed that the trunk muscles, especially the fan-shaped pectoralis major beneath the breast, are most active at the beginning of the acceleration phase of the serve. At this point, a player begins to move the racket towards the ball, which is hovering above their right shoulder. This motion brings the racket arm from behind the head, down onto the ball — sometimes as fast as 105 miles per hour at peak speed.

And after that, the whole movement must come to a screeching halt, marking the beginning of the follow-through phase. A deceleration like that, these researchers write, is prime opportunity for injury: “The follow-through phase is the most violent of the tennis serve. . .Half to three quarters the athlete’s body weight is required to support the shoulder during deceleration.”

Such violent movements can disrupt muscle structure, even among the best-trained athletes. Muscles are made of bundles of fibers, wrapped up in thin fibrous tissue known as fascia, and muscle strain occurs when the fibers are stretched or torn, usually as a result of being stretched too far or forced to contract too quickly, according to Harvard Medical School. A tennis player’s shift from the acceleration to the follow-through phase of the serve often requires rapid shortening and contraction of fibers in the pectoral muscle, and so any tearing that happens at this point can cause a “pectoral strain.”

Though we know she’s suffering an injury to her pectoral muscles, we won’t be able to confirm the nature of Williams’s injury until she gets her scheduled MRI next Tuesday. Everyone who’s been raring to see that long-awaited epic Williams-Sharapova matchup, unfortunately, will have to be a little more patient.

More like this
Mind and Body
6.25.2022 1:00 PM
Why “micro workouts” can have significant mental and physical benefits
By Sam Reiss
Mind and Body
6.29.2022 6:30 PM
How music makes you feel may depend less on your brain than scientists once thought — study
By Allison Parshall
Mind and Body
16 hours ago
Do you need 8 glasses of water a day? Hydration scientists demystify the number
By Katie MacBride
Related Tags
Share: