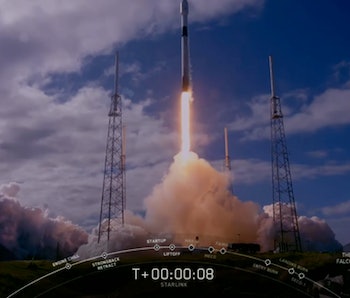 “Without a fully & rapidly reusable orbital rocket, humanity will never be a multiplanet species”

Liftoff! SpaceX sent up the second batch of 60 Starlink satellites Monday from the Cape Canaveral Air Force Station in Florida. This was the first mission to reuse a booster four times. SpaceX also successfully landed the booster on a drone ship in the Atlantic Ocean. The launch takes SpaceX one step closer to offering global internet access, which is expected to come online after 24 launches. Read more.

The new mission took a big step toward reusable rockets. It’s the first to reuse a fairing from a previous mission, the protective cover that shields the cargo during liftoff. The fairing has proven a rather elusive component to save, with SpaceX employing two ships with giant nets to retrieve the shield. The fairing previously flew on the Arabsat-6A mission in April 2019. The mission was also the first time ever that SpaceX used the same Falcon 9 booster four times. Read more.

Starship launches could cost less than people expect. During a fireside chat at the Los Angeles Air Force Base, Musk explained that the Mars-bound rocket could offer a launch price of just $2 million. That would equate to around $20,000 per ton. By comparison, SpaceX charges $11.3 million per ton for the Falcon family of rockets. Read more.

That’s not all. As Starship is designed with a fast turnaround in mind, it could greatly expand the amount of cargo that humanity could launch into space per year. Where humans currently send around 500 tons into space per year, each Starship could fly 1,000 times per year and send up 100 tons of cargo each time. If SpaceX builds as many Starships as Falcons, that could mean sending up around 10 million tons per year. Read more.

SpaceX also plans to offer inter-Earth flights with the Starship, but the spaceports could prove difficult to access. Musk has suggested that each spaceport would need to go around 20 miles offshore from the city, a sizeable distance considering airports tend to be around 10 miles from a city center. Musk has proposed linking the city center with the spaceport using a hyperloop. It may not matter too much if the spaceport is positioned far away from the city, as SpaceX aims to cut the eight-hour flight from New York to London down to just 30 minutes. Read more.

What’s next for SpaceX: SpaceX is expected to launch the third batch of 60 Starlink satellites on an as-yet unspecified date. The mission was previously scheduled for November 4.

“I think that Starship will be a great transportation system for getting people and other assets to the Moon. I do, however, question its utility in getting people safely to Mars. My concern stems from the lack of any way to induce simulated gravitational force upon the occupants for such a long duration journey. Unless Starship has some way of conducting a constant acceleration outward to the halfway point, then a constant deceleration on Mars approach, then a spinning torus design would seem more practical for maintaining the health of the crew. Why has there been no consideration of a spinning torus design? Obviously, such a craft would need to be assembled in orbit.”

You’re not the first person to ask this question! YouTuber “smallstars” produced a video in August demonstrating the concept of a “Gravity Link Starship,” which would join with two passenger Starships to essentially act as a giant wheel, spinning to simulate Earth’s gravity.

“Need a new internet service provider. When will Starlink be available for purchase and what are the price points?”

Pricing is unknown at this point, but Starlink is aiming to provide internet access to the Northern United States and Canada by 2020. This would expand to “near global coverage of the populated world” the following year.

Got any comments or queries? Don’t forget to send them over to muskreads@inverse.com.

Photo of the week

NASA’s giant cameras captured an incredible image of 29 exoplanets in the southern hemisphere. The Transiting Exoplanet Survey Satellite, also known as TESS, was launched by SpaceX in April 2018. Read more.

This has been Musk Reads: SpaceX Edition #120, the weekly rundown of essential reading about futurist and entrepreneur Elon Musk. I’m Mike Brown, an innovation journalist for Inverse.