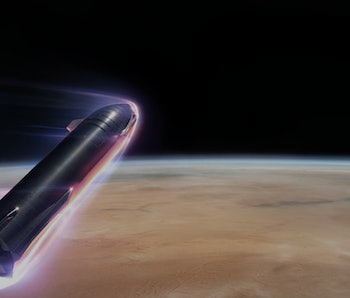 SpaceX’s Starship could sport a low cost per rocket flight — somewhere in the region of $2 million.

During a fireside chat at the Los Angeles Air Force Base, CEO Elon Musk told Lieutenant General John Thompson, commander of the U.S. Air Force Space and Missile Systems Center, that “we consider our operational costs would probably be around $2 million per flight.” That includes a cost of fuel and oxygen at around $900,000.

It’s an impressively low price, particularly considering the cost per kilogram to normally fly cargo into space. SpaceX’s ultimate goals are aimed at reducing the cost of rocket launches, making them more commonplace, and using that to fund its goals of building bases on the moon, Mars and beyond. While its low costs would likely help reach the first goal, its use of liquid oxygen and methane as fuel means astronauts could conceivably embark on those more ambitious missions and refuel at the planet.

The Starship is designed to transport at least 100 metric tons to Earth orbit. Musk compared it to the Boeing 747, which has a similar payload capacity of over 100 tons, which costs $500,000 to lease for a flight from San Francisco to Sydney and back. Although the rocket is going into space, it would only cost around four times more in terms of operation. Musk attributed this discrepancy, especially considering the cost of previous space technology, to SpaceX’s focus on creating reusable rockets.

SpaceX Starship: how it compares to current rockets

The $2 million operational costs are a far cry from the amount SpaceX charges for its current launches, using its semi-reusable series of Falcon vehicles.

Note that these are the final prices offered to buyers rather than the operational costs. When Business Insider asked SpaceX to reveal the profit margins on its Falcon launches, the company refused to answer. However, an April 2016 analysis by investment firm Jefferies International estimated the gross margins at around 40 percent.

That would mean SpaceX pays around $6.8 million for each ton it moves into geostationary transfer orbit using a Falcon vehicle. A Starship, based on Musk’s figures, would cost around $20,000 per ton. Musk didn’t specify what sort of flight this would cover, though — in August 2019, he suggested the cost of sending one ton of cargo to Mars could be around $100,000 at the low end. That would mean his ambitions of building a city with one million tons of cargo would cost $100 billion, although suggested the figure could be as high as $10 trillion.

SpaceX Starship: how it could transform spaceflight

The Starship’s low cost and high capacity could transform the space industry. Rick Tumlinson, founder of venture capital firm SpaceFund, previously told Inverse that the Starship could be considered a “Mayflower-class” vehicle, due to its ability to send up to 100 people into space at once.

The company has big plans with that capability. It wants to start a city on Mars as early as 2050, sending multiple Starships to set up basic life support systems and gradually brand out. Employees have also expressed an interest in building a base on the moon. The Starship’s ability to refuel on Mars could also enable a planet-hopping network that enables humanity to branch out further.

Starship’s first mission could be something a little more straightforward: sending up a telecommunications satellite in 2021.