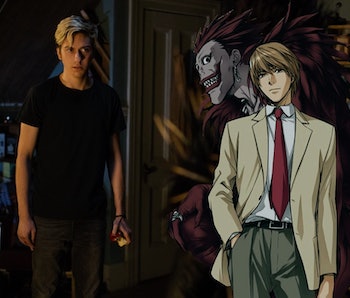 If the psychopathic mass murder that is Light Yagami’s Death Note crusade has enticed you in the past via its manga, anime, or previous live-action adaptations, then chances are you’ll be up for Netflix’s Americanized live-action rendition. Just don’t expect anything that’s even remotely familiar.

Critics thus far have largely panned the adaptation, and these criticisms go far beyond the white-washing concerns about taking a story steeped in Japanese culture and geography and relocating it to Seattle. Movie just isn’t good.

Curiously enough, Death Note went a similar route to the recent live-action Dark Tower film in that it borrows heavily from its complicated source material to create something entirely new — but utterly confusing. That being said, you don’t really need to have much familiarity with Death Note to follow what’s going on.

In fact, fans of the source material might be frustrated by the liberties taken by the adaptation. Characters that seem important at the start of the manga are absent altogether, as are many of Light’s iconic early kills using the Note. There are even subtle — and questionable — alterations to the mythology of the franchise itself that will definitely irk some purists.

In Death Note, Light is a bright young student and total egomaniac finds a magical notebook that kills any person whose name gets written inside it. When he touches the notebook, he’s able to see and speak with Ryuk, a god of death. (Shinigami is the formal Japanese name for a god of death, but it isn’t used here.) The book has a series of complicated rules and guidelines that Ryuk explains.

Much like in the manga, Light Turner in Netflix’s version attracts the attention of the brilliant international detective known only as L. Light does have an in-person confrontation with the enigmatic detective in the film, but the scope of their moral battle is vastly different than in previous iterations.

The Death Note manga has 12 volumes that proceed in a mostly chronological fashion, but there’s a noticeable time jump around Volume 7, Chapter 60 that shoots forward about four years. The latest movie never even gets that far, instead focusing more on Light’s “origin story” and his earlier days building up his reputation as Kira.

But reading these or even watching the manga that adapts them won’t help much to prep you for the Netflix movie.

Netflix’s Death Note copies over the name, basic premise, and only some character names to create an entirely new story. The movie gives Light a girlfriend, Mia, who urges him along on his conquest, which fundamentally alters Light’s role in the story.

Not even the brilliant casting of Willam Defoe as the menacing and terrifying-looking Ryuk could save this film.