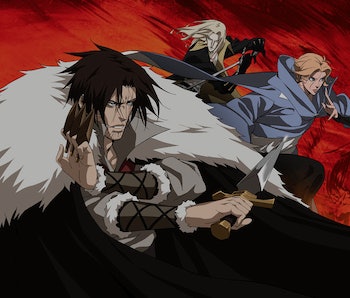 Magical notebooks, super-powered fighters, giant robots, swords, cannibals both big and small, and an honest-to-goodness quality video game adaptation are just a few of the things you can find in the best anime that Netflix has to offer right now.

Despite the rise of independent streaming platforms exclusively dedicated to anime — like Funimation and Crunchyroll — Netflix remains one of the easiest and best places to find great anime. Though its rotating stock is somewhat limited, it retains a select few anime greats that are definitely worth your time, even for the more hardcore weeaboos out there. Best of all? It’s ramping up its exclusive anime production going into 2018 with a LOT of new series.

There’s a good mix of quality Netflix exclusive programming alongside classics like Bleach and Naruto, but also newer and more grisly fair, like Death Note or Attack on Titan. There’s also brand-new exclusives like Castlevania and *Little Witch Academia.

And though Netflix has been missing the likes of greats like Fullmetal Alchemist, Cowboy Bebop, or Trigun, the following nine anime available on Netflix right now are definitely worth a watch.

Little Witch Academia, takes viewers to a magical school for a story that might as well be called “Sailor Moon goes to Hogwarts” — and the results are hilariously cute and just plain fun.

Little Witch Academia focuses on three friends — Akko, Sucy, and Lotte — at Luna Nova Academy, a magic school for witches located in West England. Though the mechanics of their world are pretty different from the likes of Harry Potter or The Magicians, Little Witch Academia still makes use of many “magic school” tropes that fans of these franchises have come to expect while eventually producing something utterly unique.

A Netflix-exclusive program, Ajin: Demi-Human takes place in a modern world beset by the sudden appearance of “Ajin,” immortal demi-humans that are deemed too dangerous by regular society. Kei Nagai is a young student who discovers he is an Ajin after he wakes up from death following a traffic accident. On the run from a government keen on experimenting on him, Kei has to find a place in a new world he never knew existed. Ajin is getting the live-action treatment in Asian theaters this September.

It’s 2022. Imagine getting trapped inside a virtual reality, MMORPG, where the only escape is beating the game, and death in-game means death in real life. That’s the basis of Sword Art Online, in which 10,000 players are trapped inside a video game by the same name after its launch. Aincrad, a 100-floor floating castle, serves as the setting for the game, in which players battle, explore, and even fall in love. What the lead characters, Kirito and Asuna, eventually uncover is a conspiracy that bleeds into more worlds than the digital one they’re trapped in.

This psychological thriller is one of the most popular manga of all time. Not only is its anime version also acclaimed, but with a live-action American adaptation coming summer 2017 from Netflix, there’s no better time to watch Death Note. The anime chronicles the efforts of a brilliant young sociopath named Light Yagami after he discovers the “Death Note” of a Shinigami, or god of death, named Ryuk. Writing any name into the notebook leads to that person’s death, and as Light begins using it to punish those he deems deserving, he uncovers the many nuances to its power. With the Death Note in hand, Light uses his startling intellect and bewildering ego to cleanse the world of evil and become an internationally recognized serial murderer.

Against all odds, what originally began as a parody of the broader superhero genre — and especially shounen anime — became something of an anime sensation in its own right. The titular one punch man, Saitama, has a rigid training regimen that makes him able to defeat any enemy with a single punch. One Punch Man loosely runs on the musings of what might happen to an anime hero after he “leveled up” all the way and finally gained the ultimate power. As it turns out, due to plain and unassuming looks, Saitama almost never gets credit for his actions protecting the world from monsters, and comedy at his expense makes One Punch Man endlessly watchable.

Though American-made and perhaps not deserving of the “anime” title, Neo Yokio nonetheless delivers a fun satire that addresses dozens of anime tropes in one fell swoop. Set in a futuristic version of a drowned New York City, Neo Yokio follows Kaz Kaan, a “magistocrat” tasked with protecting the city from all manner of demonic threats. Attended to by his robo butler, Kaz also navigates the opulent lifestyle of the city’s most elite. The whole thing feels very much so like if Wes Anderson made an anime

One of the earliest and best of Netflix’s exclusive anime programs, Knights of Sidonia is a solid entry into the mecha subgenre of anime. With impeccably clean CG animation and carefully scripted character movements, Sidonia is a visual spectacle while also being a solid sci-fi world in the far-flung future. In 3394, the last remnants of humanity live aboard a massive arc after being driven off Earth by the shape-shifting aliens called Gauna. Using giant mecha, referred to as Gardes, pilots like Nagate Tanikaze have to defend Sidonia and its inhabitants from extinction.

Contrasted against the gorgeous backdrop of a picturesque, vaguely Germanic landscape is Attack on Titan, one of the most horrifying, bloody, and action-packed anime in recent memory. What’s left of mankind resides behind a series of layered Walls that prevent the giant, humanoid cannibals called Titans at bay. The series focuses mainly on a small group of teenagers, Eren Yeager in particular. During an attack from the Titans, Eren accidentally discovers that he has the ability to transform into a considerably powerful Titan, and it changes things in the war forever.

Seldom do video game adaptations ever wind up amounting to anything worth watching. Adi Shankar’s take on the Castlevania game franchise may present a disappointingly short first season, but that’s the only area where it comes up short. Netflix’s Castlevania offers a concise and exciting story that draws upon its source material while also offering up something fresh, innovative, and exciting.