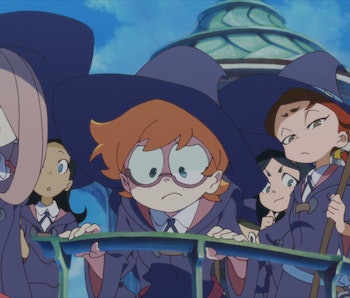 Netflix’s newest anime release, Little Witch Academia, takes viewers to a magical school for a story that might as well be called “Sailor Moon goes to Hogwarts” — and the results are hilariously cute and just plain fun.

Little Witch Academia focuses on three friends — Akko, Sucy, and Lotte — at Luna Nova Academy, a magic school for witches located in West England. Though the mechanics of their world are pretty different from the likes of Harry Potter or The Magicians, Little Witch Academia still makes use of many “magic school” tropes that fans of these franchises have come to expect while eventually producing something utterly unique.

Akko, the lead in the story, was inspired as a little girl by the showy magician Shiny Chariot to become a witch herself. Akko is inexperienced and unskilled, which makes her that much more relatable in this fantastical world, but her boundless enthusiasm makes her headstrong and unlikable at school. Despite all this, she still winds up an inexplicably “special” protagonist very early on in the series when she accidentally summons an ancient, powerful staff called the Shiny Rod.

In the very beginning of the series, the ignorant Akko has only a vague sense of how to even get to Luna Nova, and non-magic locals have no idea where the “stop” is she’s looking for. She might as well be young Harry looking for Platform 9-3/4 for the first time and asking Muggle conductors.

When she does finally find where she needs to go, Akko overhears a few witches gossiping about the new student that comes from a “non-magic” family — they’re talking about Akko. This very familiar-sounding anti-Muggle sentiment doesn’t last long on the show, but it’s one of many parallels the show makes with Harry Potter.

It’s just the start of the many ways that Little Witch Academia apes the world of Harry Potter. There are cranky teachers, bizarre magical languages, wand-waving, incantations, transfigurations, and definitely potions. Dragons? Yes. A lot of focus on riding brooms? You bet. Quidditch? No, but there’s an entire episode devoted to broom racing.

Even the main method of travel for witches, via broom on the “Ley Line,” is a kaleidoscopic magic tunnel reminiscent of the Floo Powder Network. After Akko makes her first friend and hitches a ride from the correct “stop” to get to school, she messes up and drags two of her fellow students along on an accidental trip to a Forbidden Forest. Yes, it’s also called the “Forbidden Forest.”

It’s there that Akko unlocks the power of the Shiny Rod and becomes a special hero. As it turns out, the Shiny Rod is a magical staff used by her idol Shiny Chariot all those years ago. In a moment of need, the rod rises from the ground like a sword sliding out of a Sorting Hat to those in need. In the first episode, Little Witch Academia mainly sticks to a fairly basic Harry Potter-esque narrative.

The further Little Witch Academia progresses, however, the more it succeeds at differentiating itself from its fellow magical series. This anime manages to be more light-hearted than the sometimes dour Harry Potter franchise and more grounded in reality than the over-complicated The Magicians. Whereas those two tend to be self-obsessed with their own plot and lore, Little Witch Academia doesn’t take itself seriously at all, and it’s positively delightful when it’s at its most silly.

One episode looks at Luna Nova’s lingering financial woes after Akko complains about how much of their food is potato-based, and it turns out that an anthropomorphized, Scrooge-like old dragon is behind it. Another story explores Lotte’s obsession with a book series that’s basically a Twilight and Harry Potter fusion with magic, romance, and a rabid worldwide fandom. There’s even an Inception-esque dream invasion episode (which The Magicians, admittedly, also did) that winds up being really fun.

Little Witch Academia’s first 13 episodes are available on Netflix in English, and the remaining 12 that have already aired in Japan do not currently have a scheduled release date.