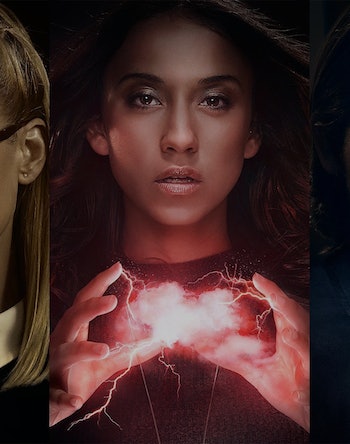 It’d be easy to pitch Syfy’s The Magicians by calling it “Harry Potter for adults,” but that’s just the kind of simplification the series avoids. Not only does a Brakebills magical education involve a kind of intellectual rigor that was never present at Hogwarts (Harry never went to class), but actually casting magic in The Magicians requires complicated finger work without the easy crutch of a wand. Children wave sticks and speak some Latin; Brakebills students must learn movements that are not only complex, but they have meaning and purpose that tie into the greater narrative of the stories.

Wands and staves have long been the default tools of unimaginative witches and wizards, but these days, it’s all about complex hand gestures, or “finger tutting.” According to Paul Becker, the series choreographer on Syfy’s The Magicians, the zeitgeist around magic is transforming: “I think finger tutting could replace the magic wand. It’s way cooler and takes more skill,” he told Inverse. “I think people are tired of seeing Abracadabra.”

Indeed, outside of Harry Potter, magic has taken a turn for the tut. Becker credits Step Up 3D for first introducing tutting to the mainstream, and now it’s really come into focus with not only The Magicians, but also Marvel’s hit film Doctor Strange, which was filled with weird conjuring motions. Becker gave Inverse the inside word on all things tutting as the show finds its groove in its second season.

In the books there’s relatively little specificity about spellcasting beyond the vague description of “intricate finger gestures.” How has the development of magic with finger tutting on The Magicians unfolded?

Some of the spells are new; some are a bit of old combined with the new in a sequence, depending on the meaning. We’ve really created a vocabulary of spells, and it keeps growing as the causes and effects change. It’s been a lot of fun creating it. Choreography isn’t just dance steps. It’s telling a story, and I think that’s why I was brought on: to help tell that story.

What’s the creative process behind developing that vocabulary? How do you decide what motions take on certain meanings?

The whole show is a collaborative process. The producers, the director, and the writers are all giving notes on the tuts, so there’s a lot of revisions and even going back to the drawing board at times. It’s not as straightforward as a simple finger movement. It’s quite intricate.

First, the writers send over the scripts, and a lot of the times it has a brief description — probably the type of tut — and it generally says what the cause and effect of the tut is. For example, it might cause all of the candles to ignite. So I thought, “What might cause candles to ignite?” Well, increasingly temperature would do that. So we created a tut that is a general turn the temperature up or down. Things like that, we think deeper than what it says on paper, so that’s sort of the process. We try to think, “What would cause this? What kind of a gesture would make sense?”

I put the tuts on tape, and the actors practice on their own. Then, on the shoot day, I go to set, and then from set we just refine it. We’ll do set visits and practice with them. They’re practicing their tuts for a good week or so before they have to shoot it.

And we’re in different worlds this season, too. We’re in Fillory, which is a very earthy, natural, organic world where the spells are very spiritual, if you will. And in Brakebills, it’s very classical, where the tuts are very geometric and rigid in style. And when we are in New York, it’s very rough. So we’ve got three kinds of styles, and three different worlds, and three vocabularies.

Do all characters perform the same spells the same way, or are there subtle variations from character to character?

They should be performing it in the same way because it’s the same language, but each actor has his or her own limitations. Some have different flexibilities and can’t do the same thing. So on the fly, sometimes we have to revise spells because an actor can’t move their hand one way or the other. Tutting is quite difficult, so those kinds of limitations have really shaped the language.

What about for special characters like the Beast, who has 12 fingers?

Well, the cool thing about the Beast is that he’s so advanced in his tutting and his magic that he doesn’t have to do much. He can make the smallest gesture, and it’ll cause destruction. For the Beast, it’s small gestures, but that takes years and years of training as a magician.

How did the show as a whole settle on really focusing on tutting as the medium for developing spellcasting?

Obviously, with The OA and Doctor Strange, people are seeing what tutters have done, and there’s this developing desire to take tutting to different places and explore it in new ways. For The Magicians, using tutting was something that was developed in the pilot that was shot in Atlanta, that I wasn’t involved in. By the time the second episode was ready to shoot, they called me in.

But choreography is the art of movement, and a choreographer shouldn’t just be able to do dance steps. They should be able to tell a story in a pedestrian way. So I don’t think if you just brought on a regular tutter to do this job, you would have the kind of vocabulary we’ve developed along the way.

Are there any spells that were your favorites?

Yeah, a lot of the ones in Season 2, because we’re tutting like crazy — but I can’t talk about many of them yet. But I will say that in the second season there’s triple the tuts in every episode. There are way more spells being cast, and with some of the Fillorian spells, they’re very organic and spiritual.

You’ve also done some choreography for shows like Once Upon a Time and Legends of Tomorrow. What’s that been like?

With shows like that, a lot of times with choreography, it’s not a musical number, right? It’s movement that’s meant to draw the story forward, to advance the plot. So all the scenes I do in shows like that, there are scenes within the scene that move things along. I always say that choreography in general, in a music number, or in any narrative — if it’s not progressing the story, it doesn’t belong in the script.

A musical number has to have a beginning, a middle, and an end just like any story, and it has to move the story forward. That’s also what I love about choreography.

Season 2 of The Magicians airs Wednesdays at 9 p.m. Eastern on Syfy.