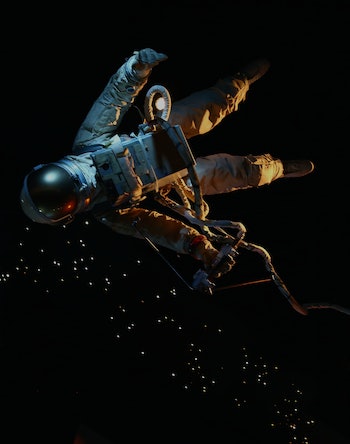 Just outside Houston’s NRG Stadium, where Super Bowl LI will kick off under the watchful eye of NFL commissioner Roger Goodell on February 3, Verizon and the Super Bowl committee are constructing a 90-foot tower modeled after the the new Space Launch System NASA is developing to send humans into deep space one day. Anyone who passes the tower will notice that it has been designed to look like a rocket and that it has seats at the bottom. There’s a good reason for this: NASA’s contribution to a sprawling Super Bowl Live fair outside the stadium is a virtual reality ride called “Future Flight” designed to simulate a trip to Mars and back with a little help from gravity.

Although no NASA funds are being used to build “Future Flight,” a person encountering this expensive installation would be right to ask why the agency is partnering with the Super Bowl like this. The short answer is that the Johnson Space Center is headquartered in Houston. The long answer is that the National Aeronautics and Space Administration is sidling up to one of the country’s biggest brands because it is perhaps concerned — for good reason — about its future. The even longer answer is that NASA could be dooming itself to a vicious cycle of political and public begging.

But before we get to that, let’s talk about the ride itself.

Riders climb into a drop tower, strap on a VR headset that takes them on an artificial journey to Mars as they go up. Then they return to Earth via a “physical freefall.” As this happens, the VR set displays the descent through the atmosphere, over the Gulf of Mexico, toward Houston, and straight into the 50-yard line of the stadium. Think of it as Doctor Doom’s Fearfall at Universal Studios, but with a VR integration and even more co-branding.

NASA is spending a considerable amount of time and energy preparing for a crewed Mars mission it hopes to launch in the 2030s. The Super Bowl setup seems to cheerlead for that effort while exposing football fans unaware of the agency’s agenda to a bold, memorable vision.

The problem with that is that NASA isn’t a shuttle service between the Earth and other worlds. Pushing the idea that space exploration is its absolute function (or even an end unto itself) within the current political climate is highly questionable, if not outright irresponsible. Context matters, and it’s impossible to ignore the social media mutiny underway, provoked by the Trump administration’s apparent desire to control the spread of scientific data, specifically about global warming. There’s no reason to think that NASA is being censored, but it’s reasonable to imagine the Earth Science program will come under fire.

That’s because NASA spends a ton of time studying how climate change is altering our planet and what can be done to limit the damage. The agency invests its R&D money in new technologies (aircraft engines, robots for exploring dangerous environments, VR headsets, biomedical tools, sustainable energy technologies) and creates systems important to the wellbeing of earthlings. It does this while prioritizing the advancement of science over any agency agenda.

Although “Future Flight” was in the planning stages well before the election, the event is being held after several tumultuous weeks for federally-funded science. Trump has yet to initiate any drastic changes for NASA, but he previously expressed a desire to bolster the private spaceflight industry.

“I think there needs to be a growing partnership between the government and the private sector as we continue to explore space,” Trump’s campaign wrote in a questionnaire to the American Institute of Aeronautics and Astronautics last May. “There seems to be tremendous overlap of interests so it seems logical to go forward together.”

For that to happen, the new administration might choose to downsize parts of NASA’s budget dedicated to research in order to build a bigger budget that is that is more devoted to human exploration — money which the agency can then toss over to private companies in the form of contracts. Trump has already tapped SpaceX CEO Elon Musk as one of his technology advisors and is having regular meetings with him. Bigelow Aerospace CEO Robert Bigelow has been bullish about the potential for Trump to improve American space exploration by perhaps doubling NASA’s budget.

No one has much of a clue about what Trump is planning. It’s possible he doesn’t, either. And that’s precisely the problem. A vague promise during his inauguration speech to “unlock the mysteries of space” tells us nothing. As one industry expert told Inverse last year, “There’s no clear pattern for what [Trump] is planning on doing.”

That current uncertainty means what once began as a fun, offbeat project for the agency could quickly turn into a series of regular of overtures to the public directly and drum up support for itself by making appearances at grand spectacles like the Super Bowl where everyone is watching. And since many of these spectacles are hosted by the corporate institutions, NASA is forced to go big on marketing. That means making some unlikely friends.

Like Trump, the National Football League has a historically adversarial relationship with science. The league, which may be on its way to a trillion dollar value and global domination, is probably happy to work with NASA, but it’s nothing like NASA.

People like football and people like the idea of going into space. For historical reasons, both of those things seem very American. But whereas the NFL creates a consumer product, NASA creates knowledge. The spectacle of the missions isn’t a product; it’s incidental. And if NASA makes it seem like the product, new problems arise.

Human space travel gives people a reason to pay attention to NASA, but it also steals attention away from the other critical work NASA does to make life here on Earth function as it does today — GPS for navigation is just a one big example — and ensuring that we’re collecting the kind of data that will tell us what’s in store for the future, including climate change. The more NASA publicizes its work in space travel while behaving like an entertainment company, the less truck it has on other issues. A new bill introduced by Republican Senator John Cornyn of Texas threatens to exacerbate such a quagmire by explicitly making compelling NASA to provide a detailed, robust strategy its human exploration work.

That’s what is in store right now. With Trump and his advisors clamping down the ability for federally-funded scientists to talk about their work, the public gets little information for the myriad of critical things these researchers are doing. And then if and when Trump quietly shuts down this work, the public — now in the dark — has no idea it is losing something important.

The problem here isn’t necessarily the NFL, but NASA agreeing to put on corporate drag and treating taxpayers like consumers. For NASA to enter into a partnership with a sports league like this creates the potential for a feedback loop of similar behaviors while misrepresenting — intentionally or not — the general public about the agency’s purpose.

Best case scenario: This is a one-and-done deal that NASA tries out and moves on from. Worst case scenario: An uninformed public doesn’t notice when NASA shrinks into nothing more than a federally funded space travel company competing with SpaceX. The risk doesn’t outweigh the reward.

Correction (1/28/17): The original article implied NASA itself was building the “Future Flight” ride, suggesting agency funds were being used in its construction. Verizon and the Super Bowl committee are building the ride and paying for it, not NASA. The original article also wrote that NASA stood for the National Aeronautical and Space Administration. NASA stands for the National Aeronautics and Space Administration.

Correction (1/30/17): The original article also suggested a false correlation between “Future Flight” and Donald Trump’s election as President. The new version of this article clarifies that NASA and the Super Bowl began planning “Future Flight” well before the election.