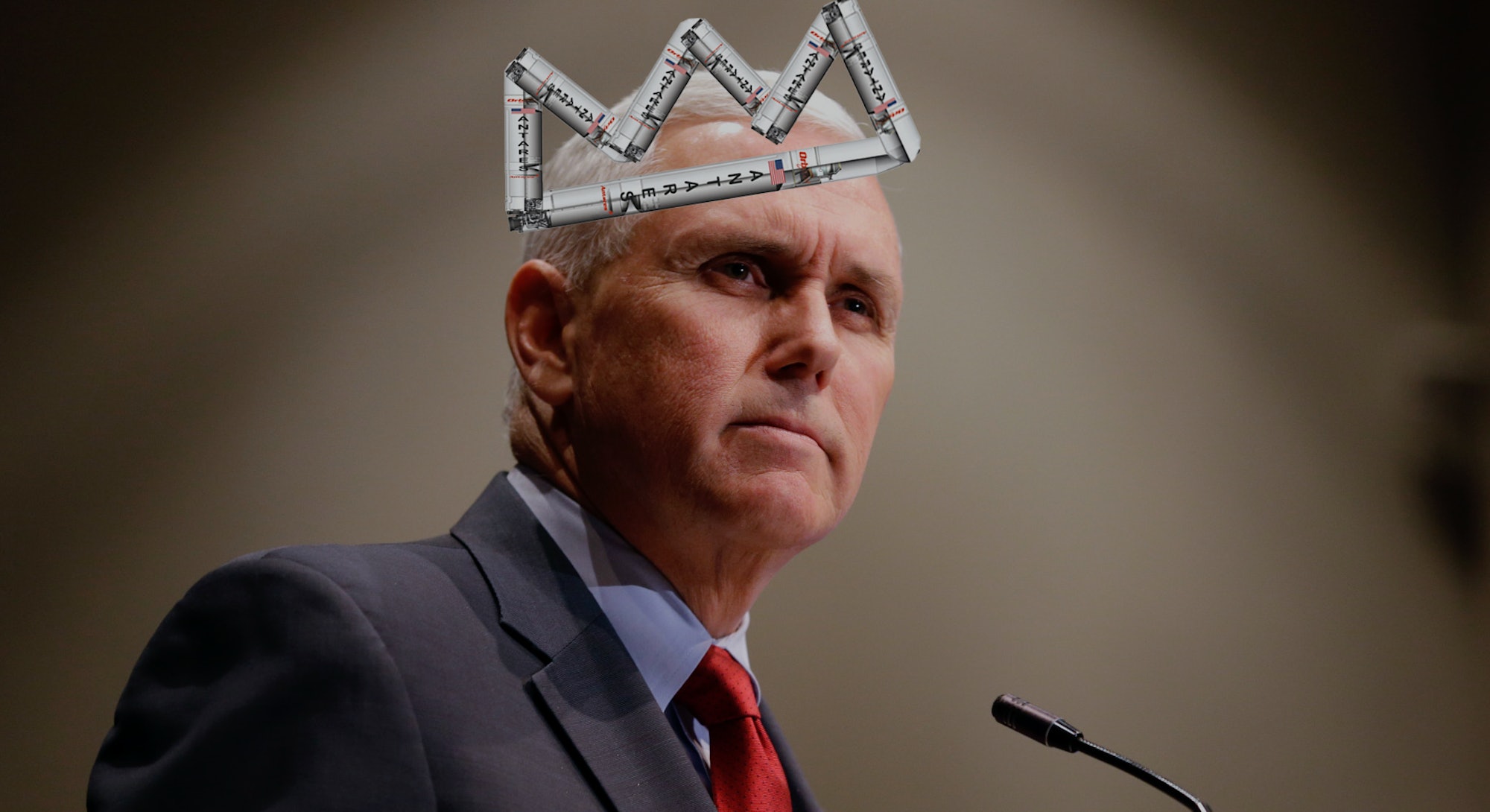 NASA has not received any word from the Trump transition team about when or how it will start to work with the agency to move America’s extraterrestrial agenda forward. Though Trump has acknowledged that a second space race is underway and voiced an interest in public-private partnerships, his space agenda remains largely a matter of mystery. The only important detail that has been made public is the looming resurrection of the National Space Council, an organization within the Executive Office of the President of the United States traditionally chaired by the Vice President. That means that mankind’s journey into the cosmos may be, under Trump, charted by Mike Pence.

Jim Muncy, a space lobbyist who leads the consultancy PoliSpace, says he’s spoken with Pence and that the now Vice President-elect is “really looking forward to the space council.”

The NSC was first established as the National Aeronautics and Space Council through the National Aeronautics and Space Act of 1958, which also created NASA. It was tasked with sitting at the intersection of all agencies involved in national space policy to best determine national priorities. At the time, the NASC was chaired by the president himself, Dwight Eisenhower, and included the secretaries of the state and defense, NASA’s administrator, the chairman of the Atomic Energy Commission, and four presidential advisors.

According to John Logsdon, the former director of the Space Policy Institute at George Washington University and former member of the NASA Advisory Council, the NASC did very little under Eisenhower, which was presumably part of the reason John Kennedy decided to make the vice president the new chair of the council after taking office. Although the Apollo program’s acceleration meant the NASC became “very important,” it actually did even less under then-vice president Lyndon Johnson. NASA did NASA stuff until Nixon took over, empower the NASC and then disbanded it in 1973.

The NASC was finally recommissioned in 1989 under George H.W. Bush — this time as the National Space Council — with the participation of the secretaries of commerce and transportation, as well as the director of the CIA and the Assistant to the President for the National Security Agency. With a staff of about 10 people attached to it, the NSC “provided an overview of what those involved in space were doing,” says Logsdon. For several years, the NSC fought with NASA and that friction led to the dismissal of NASA Administrator Richard Truly. Muncy adds that the NSC was limited by the leadership of vice president and chairman Dan Quayle, “who wasn’t seen as very influential.”

Logsdon is blunt in his assessment of the NSC under the first Bush administration: It was not successful. Muncy, on the other hand, argues that, despite Quayle’s weaknesses, the NSC did bring agencies together and led to some work that couldn’t be accomplished otherwise. He thinks the National Security Council would be a fine alternative forum for the conversations about space that need to happen to keep agencies in line, but that can be problematic because other priorities tend to monopolize decision makers’ time. The Office of Science and Technology Policy has experts that could lead conversations about the American space agenda, but lacks any real authority.

The NSC will exist, therefore, to ensure that progress is made on whatever initiatives the Trump administration chooses to pursue.

“It takes a certain amount of strength and focus to get these agencies to work together,” says Muncy, adding that this what makes the NSC potentially useful.

President Clinton wasn’t sold on that idea. He nixed the council in 1993. But there’s a caveat to that. “The law was never revoked,” says Lodgson. “The NSC still exists in principle.”

All that’s needed to reconvene it is an executive decision.

And President Trump will likely make one. In an op-ed published in SpaceNews last month, Trump policy advisory Robert Walker and Peter Navarro outlined the now-elected candidate’s goal to “end the lack of proper coordination by re-instituting a national space policy council headed by the vice president.”

Would this prove effective? What would be the advantage? “Things are more complicated now than they’ve ever been,” says Logsdon. “Space activity would occur in the new NASA-Department of Defense-intelligence community framework.”

The big reason to bring back the council is the rise of the commercial sector. NASA is already heavily engaged with forging partnerships with the private sector — through companies like Boeing, Bigelow Aerospace, SpaceX, Orbital ATK, and many others — in an effort to essentially hand off low-Earth orbit (LEO) operations so the agency can focus on deep space exploration.

This makes sense. Shifting NASA’s focus means no longer relying on taxpayer dollars to fund missions and launches that can now be run safely and easily by private companies. “Some form of coordination is definitely needed,” adds Logsdon.

To make the privatization of LEO possible, however, the commercial sector has to be able to make a profit. For Muncy, who is more bullish on the prospects of how a Trump presidency could positively affect national space policy, the key to that is deregulation.

As of this moment, experts within the Department of Transportation likely have better sense of what kind of restrictions can be lifted or modified to give private companies more freedom to grow. NOAA, the Air Force, or even DARPA might want to pursue a public-private partnership project. The NSC could act to facilitate the legal and logistical process of moving the ball forward — especially if that ball happened to be a spy satellite. Pence has noted the future administration will seek to strengthen military space assets, so an NSC that’s stocked with intelligence experts could prove useful.

The NSC could potentially aid in international collaboration as well. Let’s say China announces it wants to build and launch a space station with help from the United States. The NSC would be in a position to bring together foreign relations experts in the executive office so that the scientific and technical challenges could be understood within the context of national security concerns, trade restrictions, and cost assessments.

“As stuff starts happening, they have enough context to know who’s doing what, and why they’re doing it,” says Muncy. “There are a bunch of different things different agencies could all play in the goal to provide chapter access to space for the entire country.”

According to Muncy, this will all ultimately depend on Pence, who will chair a reconstituted NSC. He’s optimistic Pence is going to strengthen space investments through the NSC and reevaluate regulatory framework in a way that bolsters the private sector. “By applying attention to it and leadership to it — which is what the vice president and the council can do — the industry can move.”

Still, this is all just speculation. There is radio silence from the transition team about what exactly they plan to pursue when it comes to space policy and NASA’s future. Nobody has a clue as to what is going to happen. That’s totally unanswerable given the chaos of the transition process so far, says Logsdon. “There’s no clear pattern for what [Trump] is planning on doing.”

Those sentiments are echoed by Kevin Cook, a spokesman with the nonprofit Space Foundation, who says he and his organization have got high hopes, but “no crystal ball.” They agree that the revival of the NSC, which Cook’s sources say was also a plan being evaluated by the Clinton campaign, “would help coordinate across all the versus space activities from the federal government.”

If you want to see NASA land on Mars, that’s a good thing.

Trump, however, could easily change that. Although Congress has protected funding for missions to Mars, the new president may choose to pivot NASA back to the moon. Scott Pace, the current Space Policy Institute director and a potential NASA administrator pick, has supported this idea.

Currently, the most likely outcome seems to be Donald Trump handing space, as a policy area, off to Mike Pence. The future of U.S. space exploration just might depend on the former Governor of Indiana, who has expressed little interest in science to date.