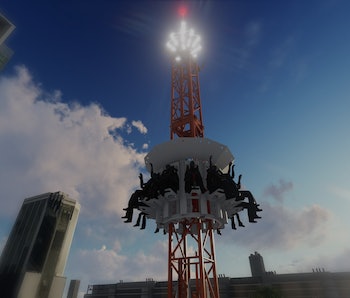 Hold onto your butts, football fans. Super Bowl LI (a.k.a. 51) will be held in Houston next year and the experience will be out of this world — virtually speaking. Thanks to a collaboration between NASA’s Johnson Space Center and the Houston Super Bowl Committee, one of the biggest events in the world will give people the chance to rocket to Mars and back on a VR simulation.

During a panel at the SpaceCom 2016 expo on Wednesday in Houston, Sallie Sargent, the president and CEO of the Houston Host Committee, and Ellen Ochoa, director of Johnson Space Center revealed this year’s Super Bowl would feature a unique experience called “Future Flight”. Stationed at Fan Fest, riders would climb on a drop tower thrill ride (much like Doctor Doom’s Fearfall at Universal Studios) and don a special virtual reality (VR) headset that would take them on a journey to Mars before free-falling back to Earth.

On Tuesday, SpaceCom — which highlights private sector initiatives and projects that will allow commercial companies to take over low-Earth orbit operations — teased an announcement that provided little idea for what exactly could bring the worlds of football and space exploration together. Inverse had its own theories, but, the actual announcement looks to be way cooler.

“The Host Committee has declared Super Bowl LI as the Super Bowl of the future in the ‘City of the Future,’” said Sargent. “Nothing says ‘future’ more than deep space exploration.”

The 90-foot-tall drop tower will be painted orange and white to resemble NASA’s newest heavy-lift rocket: the Space Launch System (SLS). Riders wearing VR goggle, will virtually travel from Earth to Mars as the ride climbs 90-feet in the air (which is roughly one-third the size of an actual SLS rocket). When they get to the top of the tower, the views will switch to real 360-degree views of Mars captured by the rovers and orbiters currently occupying the red planet.

The experience concludes with a heart-racing free-fall back to Earth. Riders will race through the atmosphere, into the Gulf of Mexico, over the City of Houston, through the roof of the NRG Stadium and finally touching down on the 50-yard line right before kickoff. Thanks to the combination of physics and VR, riders will get to experience a few, brief seconds of weightlessness — just like an astronaut.

“Astronauts are in free fall continuously,” explained Ochoa. “You can get a few seconds of it at this VR experience at Super Bowl LIVE.”

The Super Bowl LIVE fan festival, which will run from January 28 through game day, Sunday, February 5, will feature the one-of-a-kind Future Flight experience and will offer visitors a chance to learn more about current and future space exploration technologies, as well as offer kids the chance to participate in many STEM-related activities.

The committee and NASA wanted to present space exploration to the public in a new, innovative way. What better way than to immerse fans in the future of space exploration via virtual reality? This author recently got the chance to walk on Mars with the help of HoloLens. The views were massively impressive. One can only imagine what it would be like to rocket there.