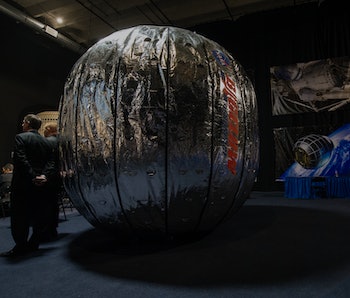 BEAM can be stuffed and stored in a compressed state inside a rocket, and then inflated when docked to ISS. It’s designed for housing humans, and in the future, it could allow astronauts to set up labs and bases on other planets.

In June, a few months after being fully installed and inflated, Jeff Williams became the first astronaut to enter and explore an expandable module in space. Currently, however, BEAM is closed off from the rest of the station most of the time. Astronauts only periodically enter BEAM to check its status and the instruments inside that are collecting data relevant to a better understanding of expandable habitats in microgravity.

Bigelow Aerospace and NASA have been discussing extended use of BEAM, but they have not reached an official agreement yet.

“We are excited that BEAM may serve multiple uses that could extend its time attached to station well beyond the original two-year expected period,” Robert Bigelow, founder of Bigelow Aerospace, told SpaceNews. “We will be happy to provide more specifics as this process develops shortly.”

Right now, NASA said it would dispose of BEAM at the end of its two-year mission, using a robotic arm to detach the module from the station and allow BEAM to burn up in Earth’s atmosphere. However, there’s a possibility of an extended mission because there are no future plans for using the docking port where BEAM currently installed.

“The BEAM demonstration is providing valuable data regarding how the materials and an expandable structure perform in the space environment,” NASA spokeswoman Cheryl Warner said. “We are in discussions with Bigelow Aerospace to evaluate the next steps for the module.”

Bigelow seems optimistic that President Donald Trump will increase support for NASA and space exploration. Back in November, he called on Trump to double NASA’s budget and make plans for astronauts to return to the moon. Trump’s plans for space are still unclear, but it’s likely he will move to help expand the impact of the commercial sector on space exploration and operations — which Bigelow seems keen to take advantage of.