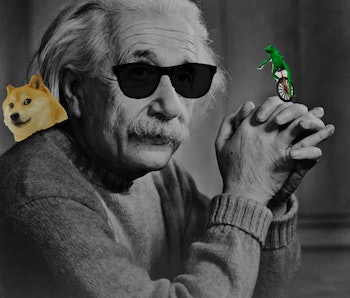 The Trump administration hasn’t even started yet, but if there ever was a time to wave your science flag high, it’s now. He’s referred to climate change as a “Chinese hoax”, has mentioned cutting the funding that supports NASA’s efforts to study and monitor climate change, and picked people who have — respectively — expressed intentions to shut down the Department of Energy and sue the U.S. Environmental Protection Agency.

But memes might save us. Unlike memes of the political or sports or sporting variety, science memes have struggled; right now, they’re mostly jokes you find on posters hung in middle school biology classrooms.

These science memes, however, are tongue-in-cheek and make a point. It’s good to poke fun at science — attaching it to popular culture will contribute to its very survival.

That the Earth is actually flat is an age-old theory that just won’t quit, despite expansive evidence proving otherwise. In January 2016, this theory picked up steam and morphed into the most embarrassing feud ever between flat-Earth believing rapper B.o.B and round-Earth defending Neil deGrasse Tyson. Internet interest in the concept of a flat Earth spiked for the month of January, resulting in some terrible music and a chance to explain the science of it all.

Everyone’s favorite Ancient Aliens meme got an upgrade when Elon Musk casually mentioned in June that he thinks we all might be living in a simulation. While this theory isn’t new, it did kick off a slew of Matrix-related internet reactions. What’s the best way to reconcile that you might be a pre-programmed slave to a system? Memes.

FrackFeed makes the best of 2016 list while simultaneously being the worst. An attempt by the lobbying group North Texans for Natural Gas to reach out to a hip and young audience, FrackFeed is essentially a gallery site of pro-fracking memes. They are all terrible, but are a good example of when a scientific concept gets meme-ified by people who are less than beholden to actual science.

The “math lady” — otherwise known as the “confused lady” — became a trending meme in October, and we’re claiming her for science. The meme is a screenshot from the popular Brazilian telenovela Senhora do Destino but you probably know it from when the people you follow on Twitter were trying to explain how confused they were by something. Trying to figure out how many “fucks to give”? Try the math lady. Don’t quite trust what someone is telling you? You’re the math lady. The math lady even got turned into a BuzzFeed costume.