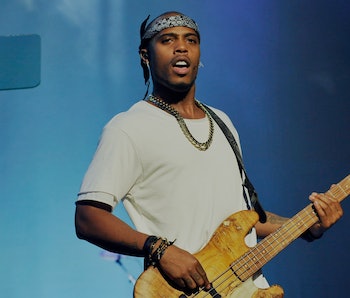 In case you were buried under the snow for the last 24 hours and missed out on all of Monday’s most important news, allow me to catch you up: Mediocre Atlanta rapper B.o.B went off on Twitter to profess his belief that the world is flat:

He’s just the latest in a string of celebrities coming out to declare their support for flat earth trutherism.

Maybe Donald Trump has just emboldened people to start vocalizing every bad and incorrect idea they’ve ever had.

And it escalated quickly. Very quickly:

Meanwhile, Neil deGrasse Tyson (number 5 in our astronomer power rankings!) took a break from filming Cosmos and surfing around the country’s thrift stories for sweet space-themed vests, to try to make B.o.B understand why he is, well, wrong.

Tyson brings up some very good points — until he makes one fatal error that puts his entire body of expertise in jeopardy:

See, Neil — and by the way, stop spelling your name incorrectly — you’re wrong to suggest we can still like B.o.B’s music. Because his music sucks. That’s a scientific fact. I only have two good memories of B.o.B: the video for “Put Me On” (and that’s mainly because he samples A Tribe Called Quest), and the Nancy Kerrigan reference in “Strange Clouds,” because I thought the delivery was nice.

Anyways, the spat didn’t stop there. Today, B.o.B decided to release more bad music and just posted a new song on Soundcloud: “Flatline,” which features a sample of Tyson himself talking about the world’s shape.

The song is rife with problems — and not just musical ones. Besides equating himself to Malcom X, he just gets a lot of stuff wrong — shocker. He says NASA is part of the Department of Defense and blames them for perpetuating the round-Earth conspiracy. He also seems to disagree with Heliocentrism and lends support to noted Holocaust denier David Irving, and says Hitler wasn’t as bad as Stalin.

I’m not sure how Tyson will respond to this, but I have a meme in mind that might work.

This is one of the most bizarre rap feuds ever to happen.

I don’t want to live on this planet anymore.