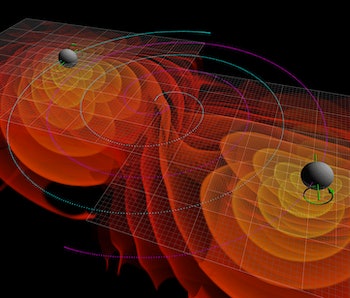 Today, scientists with the Laser Interferometer Gravitational-Wave Observatory (LIGO) confirmed they have finally found evidence of gravitational waves and, in so doing, solved the 100-year-old puzzle that obsessed Albert Einstein. It is one of the most important discoveries ever made by physicists, and it promises to lead toward a cascade of other revelations.

“We have detected gravitational waves,” LIGO director David Reitze said during Thursday’s announcement, confirming months-long rumors circulating around the scientific community. “This is truly a scientific moonshot. And we did it — we landed on the moon.”

Back in 1916, Einstein published his Theory of Relativity. Among the very many ways it plays a pivotal role in the foundation of modern physics, the theory predicted the existence of gravitational waves: ripples in spacetime that move outward, caused by the presence of mass. Having posited the existence of these ripples, Einstein died before he actually located them.

Because Einstein’s work was seminal, almost everything we think we know about gravity depends on the existence of gravitational waves. That means that until today, most of what we knew about gravity wasn’t actually confirmed. That’s all changing.

Why did it take so long? Gravitational waves are so obscenely small and weak that scientists have been looking for a signal that’s on a scale to power of -23. There’s always been a surfeit of secondary evidence, but real proof is insanely difficult to find at that scale, which is why LIGO was put together 25 years ago. A collaboration between MIT, Caltech, and nearly 1000 scientists across 16 countries, LIGO built something called an interferometer: a four-kilometers long instrument that shoots lasers back and forth with mirrors to detect signals that are as tiny 1/1000 the diameter of a proton.

LIGO built two of these ultra-sensitive instruments — one in Hanford, Washington, and another in Livingston, Louisiana — to make sure anything they found could be verified. Both instruments went online in 2002, but for 13 years, there was nothing but darkness.

On September 14, 2015, two days after newly-upgraded interferometers were made operational, LIGO researchers finally found something. As they would later learn, it was a signal produced by two black holes — each about 150 kilometers in diameter and 30 times the mass of the sun. They were spiraling into each other at about half the speed of light. They collided and merged into a single black hole.

The total energy the collision expelled was over 50 times more powerful than of all the stars in the universe put together.

According to Reitze, the recorded signals were in line with what equations Einstein’s theory would predict in these circumstances. Nevertheless, he and his colleagues found the data “mind boggling.”

The signals aren’t just a peek into what gravitational waves look like. They also illustrate actual characteristics of the merger event and of the black holes before and after the collisions. According to LIGO scientist Gabriela Gonzalez, the waveforms of the captured signals show that the merged black hole is actually slightly less than the sum of the original two objects. Furthermore, “this merger happened 1.3 billion years ago,” she said, “when multicellular life here on Earth was just beginning to spread.”

Gonzalez played a modified audio recording of the signal — a short, birdlike chirp. “This is the first of many to come,” she said.

The ramifications of the findings can’t be overstated. The discovery doesn’t just put to rest a century-old mystery — it opens humans up to learning more about the universe through a unique lens. Before Thursday, astrophysicists were essentially limited to studying the universe through the electromagnetic spectrum. While we’ve learned a great deal, there is a massive amount about stars, supernovas, black holes, and other phenomena we can’t study without observing and measuring gravitational waves. Knowing that we can finally listen in on those signals opens up scientists to a whole part of the universe that used to be closed.

Perhaps most intriguing, emphasized famed astrophysicist and LIGO co-founder Kip Thorne (ranked 7th, but definitely trending upward now) will be the possibility of studying what are known as “cosmic strings,” which scientists think help explain the expansion and inflation of the universe since the Big Bang.

Starting LIGO “was a big risk,” said France Cordova, director of the National Science Foundation. But that risk today seems to have paid off. “Einstein would be beaming.”

Thursday’s announcement will also surely raise bigger hopes for LISA Pathfinder — a spacecraft acting as a testbed for eLISA, a space-based interferometer — and will greatly validate the money and time invested into that project.

And that’s just the start. We’re going to learn more about the universe than we might have ever thought possible, and may finally come closer to understanding the origins and the future of the universe. “What’s really exciting is what comes next,” said Reitze.

More like this
Science
13 hours ago
Astronomers discover a quirky star with a surprisingly galactic feature
By Nancy Atkinson and Universe Today
Science
6.26.2022 10:00 AM
In the search for dark matter, an unexpected tool may give scientists hope
By Antonis Antoniou and The Conversation
Science
6.30.2022 5:45 PM
The Large Hadron Collider restarts next week — here's what it's hunting for
By Rahul Rao
Related Tags
Share: