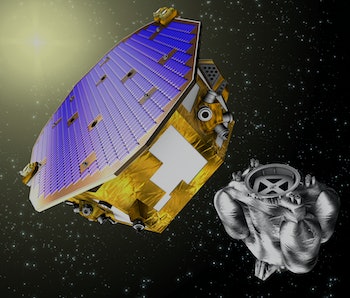 In less than a month, the European Space Agency will be launching the LISA Pathfinder space probe to lay the groundwork for an audacious plan to research gravitational waves in outer space some 20 years from now. The mission was approved in November 2000, and it’s taken 15 years to reach a launchpad. Here’s everything you need to know about this incredibly bold undertaking.

LISA is short for Laser Interferometer Space Antenna. The whole mission is actually part of a larger concept — “evolved LISA,” or eLISA — to build and operate an observatory in space that can directly study gravitational waves. The pathfinder’s purpose is to test technologies that will be used for eLISA by the time that mission launches in 2034. The endeavor will ultimately cost the ESA more than $420 million dollars.

The LISA Pathfinder mission will be putting two test masses in a near-perfect gravitational free-fall and measuring their motion to demonstrate that free-falling bodies follow geodesics — straight lines in curved space — in spacetime. Doing this requires some of the most precise suite of instruments ever built, including state-of-the-art inertial sensors, a laser metrology system, drag-free control, and a micro-propulsion system for ultra-precise movement.

Up until now, scientists have primarily studied the universe by observing electromagnetic waves, like visible light, infrared and ultraviolet light, radio waves, and x-rays and gamma rays. The point of the whole LISA program is to allow us to observe the universe by detecting gravitational waves: ripples in spacetime outlined by Albert Einstein’s theory of general relativity. They exist all around the universe, but have never been directly detected by researchers. Accurately studying these waves — only truly possible in a zero-gravity vacuum — could finally shed light on many of the spacetime phenomena we still know very little about, like black holes.

Besides the scientific implications, there are big technological reasons why the world will be paying attention to the LISA Pathfinder. The inertial sensors on the probe will be capable of monitoring movements that are as tiny as 46 millimeters. When the craft begins to move away from its null position, the control system activates the micro-newton thrusters — the first time this propulsion system will ever be used by the ESA — to center the craft.

When the LISA Pathfinder finally launches on December 2, it will travel out to a halo orbit 310,600 and 497,000 miles wide, 932,000 miles away from Earth. The operational phase of the mission should be about six months, but could be extended for another year to conduct more measurements related to general relativity.

Although this mission might not be generating the buzz NASA’s study of Mars is getting right now, its implications could be far more profound on space and physics research. If the LISA Pathfinder’s tests are successful, it means we’re going to be one step closer to seeing humans build an observatory that’s operated in space. It means we’re going to be capable of finally observing something that the world’s greatest physicist could only theorize about. Just two decades ago, this was unthinkable. By 2034, it could (hopefully) be a reality.