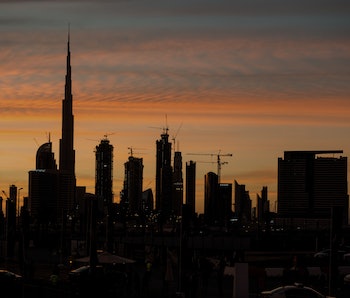 Dubai is ramping up to make the rest of the world’s tech accelerators look meek.

The Crown Prince of Dubai, Sheikh Hamdan bin Mohammed bin Rashid al Maktoum — follow him on Instagram; it’s incredible — has announced a government-led accelerator today to solve seven of the biggest “21st-century challenges.” It will start in September, and is called the “Dubai Future Accelerators.” Like everything else Dubai does, it’s bigger, more expensive, and flashier than anything else.

Dubai Future Accelerators is different than other programs because it has the backing of the city (the government, at least, if not the people). Prototype technologies for the seven problems that need to be solved — transport, policing, building, health, education, business, and water — will have full reign over one of the most extravagant cities in the world. It’s the social utility of Y Combinator’s universal basic income experiment, but with nearly unlimited oil money and free reign over an entire city’s population.

What’s more, Dubai doesn’t even want to take your technology. It just wants to be on the cutting edge of innovation. Competitors won’t have to give any equity of the inventions and businesses they start in the 12-week program.

Here are seven outrageous goals of the Dubai Future Accelerators program. And if you think you have what it takes, sign up on their website.

Dubai’s Roads and Transit Authority knows that transport is changing. Current transport is heating up the planet — something Dubai is all too familiar with — and new transport is a major way to reduce pollution.

Don’t expect hyperloop proposals to fit in here, though. Not because Dubai doesn’t care about the hyperloop, but because it already has a design competition for that.

Trying to predict terrorism before it happens doesn’t often work. And algorithms that predict crime are often racist. So this task isn’t going to be an easy one in terms of fairness.

Specifically, the challenge here by the Dubai police force is to: “Test integrated behavioral, genetic and biological systems for identifying, tracking and sharing information on criminals that are 10x more accurate and 10x more efficient.”

Big isn’t the sole goal for this challenge, though, efficiency is. Which is why the challenge has some topics in there that aren’t normally talked about with buildings: mycology, algae, biomimicry, and sand-based 3D printing materials.

If an efficient solution is found, it’d be nice to share with the rest of the Middle East — considering Qatar will be so hot it’ll be uninhabitable by 2072.

The challenge here is to “harness Dubai’s remarkable genetic diversity” to improve speed and efficiency of medicine with genomics, analytics, telepresence (virtual reality), and personalized medicine.

No final word yet on if this magic medical breakthrough will be delivered by jetpack or not.

Decrease cost of education by 200 percent

Dubai is flying in a lot of people (for free) for this competition. If the education segment of the challenge goes as planned, its own 2.5 million residents will be participating in these challenges. The focus here is local and technology, but local means Arabic, so the United States’s failing education system is pretty much out of luck here.

Now, Dubai wants businesses in the hospitality, food and beverage, and real estate sectors to experience some speed.

Dubai is in a desert. There’s the occasional hail storm, but for the most part, it’s so hot you can’t go outside.

This one makes a lot of sense for the survival of Dubai, although 1000 percent is a hell of a number. Electricity consumption in Dubai has more than doubled since 2005, and each resident consumes 240 cubic meters of water more per year than the global average, Gulf News reports.

These challenges might just be what it takes to keep Dubai from becoming an urban dystopia.

More like this
Innovation
8.8.2022 10:00 AM
A wild new plane-train hybrid could whoosh you to your destination — if it can get off the ground
By Molly Glick
Entertainment
8.6.2022 12:00 PM
The real stars of Bullet Train deserved better
By Eric Francisco
Culture
8.10.2022 11:30 AM
10 years ago, Jeremy Renner ruined the best spy-thriller franchise of the century
By Adrian Manuel
Share: