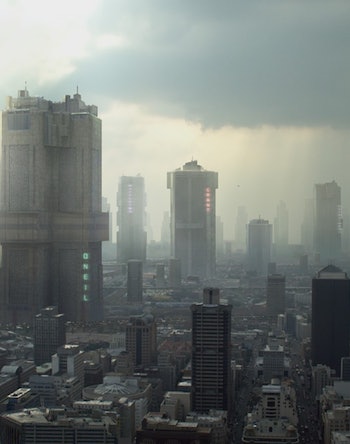 Science fiction cityscapes have awed audiences since Metropolis debuted in Germany in 1927. These amplified skylines provide a visual shorthand for change, depicting a sort of physical and political accretion. The future Los Angeles of Blade Runner (and Blade Runner 2) implies the end of nationalism. The flooded New York of Spielberg’s A.I. Artificial Intelligence implies climate change and loss. The upper middle class verticality of Spike Jonze’s Her implies the economic and cultural results of widespread automation. These cities aren’t just predictions, they’re caricatures of our culture that eventually inform real world decision making.

Steve Graham understands the reciprocal relationship between science fiction and reality better than most: He’s a professor of cities and society in the Global Urban Research Unit at Newcastle University, an expert on speculative fiction, and the author of Vertical: The City from Satellites to Bunkers. Inverse spoke with Graham about science fiction’s urban landscapes, what they mean, and how they’re being built already.

Could you highlight some of the symbolism common to most science fiction cityscapes?

The vertical cityscape has totally dominated modern science fiction since its inception in the late 19th century, and persistent tropes of the vertical city re-emerge endlessly with the inscription of class and political and social relations into vertical space. The power of the elite being a power of inhabiting the high spaces of the huge, elongated towers; the domination of the airspaces. And their vertical dominance is literally overwhelming to those who are at the lower level in society, who are almost always inscribed into these labyrinthine, burrowing, hell-like subterranean or street levels.

So there’s this obsession with gigantism. Ever since H. G. Wells wrote The Sleeper Awakes, in late 19th century London, the assumption was that the future was going to be vertically gigantic.

Elites, in many of these worlds, inhabit this world of decadence and fantasy and power, and have an arrogant disdain for the minions who are building and operating their city. This is very prevalent in the recent film looking at J.G. Ballard’s High-Rise dystopia about modernist housing in England. This means that the politics of resistance in these cities tend to be about how repressed workers can actually transcend the strata of society by uprising against the arrogant elite power above — whether it be through trying to take on surveillance systems built to control them, or literally, physically, uprising against the elites like in Metropolis.

Do you think this theme is common merely because it’s a powerful visual metaphor, or for other reasons as well?

This is much more than metaphorical. These are not just imagined cityscapes: The way these putative futures are imagined have enormous implications for our contemporary urban life. There are all sorts of issues here. One is that they inspire contemporary architecture. There’s no doubt whatsoever that Blade Runner has been a big inspiration for a lot of architecture. The visual designer who shaped the sets of Blade Runner — a guy called Syd Mead, who was an architectural draftsman by training — has done a lot of touring around the Middle East, especially, to talk to elites in those parts of the world about futurist architectures. The architect for the Burj Khalifa, Adrian Smith, has a hugely influential practice in Chicago, SOM, which designs most of the world’s supertall skyscrapers. He said that his inspiration for designing the Burj Khalifa came from watching Wizard of Oz as a child — the Emerald City being these gleaming towers looming high above flat, endless plains.

So the ideas of science fiction resonate very powerfully with how contemporary cities are shaped. Another example might be the designs of Shanghai’s Pudong district, where there’s a very palpable sense of Blade Runner-esque atmospheres. Blade Runner itself was partly shaped by Ridley Scott’s ideas about oriental urbanism and slightly orientalist treatments of street life in the supposedly futuristic Los Angeles. And ideas about Blade Runner are clearly influencing Chinese elites’ ideas about urban futurism.

You’re seeing past visions of the future become the present.

Some artists in the Gulf have said that it’s no wonder that when you go around cities like Dubai — Westerners, anyway — you feel like it’s the 1950s vision of the future, inscribed into a sort of Disney-esque hyper-clean world. Some of these artists are saying that it’s not really a great surprise, because the elites that shaped these cityscapes spent their childhoods consuming Western sci-fi comics, novels, films, and so on. So the imagination of future cityscapes really does have a material impact.

Why do you think we would want to mimic dystopias in our architecture?

A lot of people find dystopias like Blade Runner endlessly compelling. They’re not just dark and depressing and wholly negative visions. You have to remember that Blade Runner was coming in in the early ‘80s, at a time when urban planners and architects were trying to move away from the super-clean, modernist dreams of Le Corbusier, which were all about destroying the street, removing the people from the vehicles, and creating these sterile and clean mechanistic cities. One planner in the mid-‘80s said, ‘You know, there’s one thing about Blade Runner: Yes, it’s gritty and it’s scary, and it’s obviously unbelievably unequal as a future society — but the nightlife looks amazing.’

There’s a really startling and disturbing similarity between a lot of these sci-fi vertical dystopias and the current practice in, say, the Gulf, where the elites inhabit their penthouses and fly around in helicopters and business jets while literally thousands of workers are dying every year to construct these edifices.

Since the elites are the ones coming up with the concept for these buildings, it makes sense that they would find something appealing or attractive in these science fiction films where the elites are dominant.

Yeah, absolutely. And then there are even more relationships that are at play here, because once these cityscapes are built — once this extraordinary Blade Runner-esque cityscape in Shanghai is constructed or reconstructed, once Dubai is ratcheted into the skies — then the next generation of sci-fi movies are then filmed in these places to represent the future. You’re already getting a lot of sci-fi movies — like Code 46 by Michael Winterbottom, for example — filmed in these cities. They then become the exemplars of the future, which works very powerfully to help brand these cities as futuristic places, which is half of the battle for these elites: Once they become images for the future, then that’s it.

It’s reciprocal. There isn’t an obvious start point for this. This goes back to much bigger questions about cosmography and theology. All religions are inspired by vertical imaginaries, where upwards is good and powerful and civilized, and downwards is hellish and disdainful. These imaginaries of the relationship between people and God is at the heart of this. The Tower of Babel loomed large in all of these sci-fi imaginaries, particularly in Metropolis, where the elites led this decadent unearthly lifestyle, like gods themselves, and are clearly guilty of the arrogance and hubris of the people who built the Tower of Babel. And the tower that they inhabit is actually called the Tower of Babel. You’re invoking sort of long theological myths about verticality in all of these discussions, as well as more modern discussions about vertical architecture.

In a way, while sci-fi is fascinating, truth is always stranger than fiction. The transformation around surveillance is already mimicking a lot of the predictions in, say, Minority Report, which was very much emphasizing how surveillance and marketing were becoming completely tailored to the individual. Remember the scene with Tom Cruise running away through the mall, and all of the shops are sending him individualized marketing messages?

There are already litter bins in London — that have been withdrawn, but were introduced — that would do data mining of individuals as they came through, through cloud-computing mobile services, and offer them synchronized adverts to their individual consumption habits. That is very much the basis for what happens on the web. With Amazon, eBay, everything else, you get this completely tailored and individualized experience based on what’s called ‘predmediation’ — the massive trawling of your digital self through global computer networks that then provides the basis for this individualized marketing.

I’m not saying that we live in a sci-fi society, but I do think that there are extraordinarily rapid transformations in the cultural technologies of cities that sort of parallel a lot of these predictions.