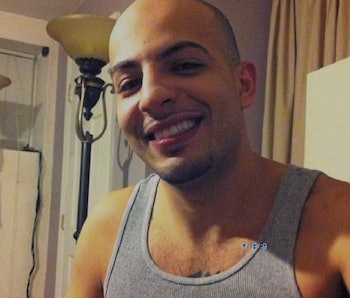 In late 2012, I went to Rikers Island to interview Ahmed Ferhani, who was in jail awaiting trial on terrorism and hate crime charges. I had been reporting on Ferhani’s case for months, but this was my first time talking to him in person. He went out of his way to request a pencil and sheet of paper for me to take notes on, knowing I wouldn’t be able to bring in any outside writing materials.

In the media, Ferhani had been portrayed as “the synagogue bomber,” because of statements he made to an undercover NYPD officer about tossing a grenade into a Jewish house of worship. It’s true he made some awful statements about Jews. What’s also true, which I reported in The Nation at the time, is that the NYPD’s eight-month investigation into Ferhani was much thinner than the public knew. The FBI declined to get involved in the case, for instance, because of misconduct by the undercover officer.

He eventually took a plea, got sentenced to ten years upstate, and forced deportation after that. He was initially housed at Great Meadows Correctional Facility, and around June, 2015, was moved to Attica. On Thursday morning, his mother was notified that he’d tried to hang himself in his jail cell. She called me that morning, and I wrote a story about the abuse he claimed he suffered at the hands of prison guards. He’s in a medically induced coma now in an outside facility.

Ferhani is just one of hundreds of American Muslims since 9/11 who have made headlines for alleged terrorist ties or half-baked plots. These cases generally follow an identifiable pattern. First, an unsophisticated target enters into a relationship with an undercover agent or informant, who may have a financial or legal incentive to find a terrorist. Next, the target makes a plan that would be impossible to fulfill without the surreptitious help of the government. Finally, once the target is arrested, the Department of Justice issues a press release describing how a person was “radicalized,” but is now behind bars.

The idea of “radicalization” has been the subject of endless academic studies. Recently, The New York Times looked over the current state of indicators, predictors, or other ways to determine before-the-fact whether a person was going to engage in political violence. What the Times found is that it’s virtually impossible to determine who is going to become a terrorist. The characteristics of Americans who have tried to join ISIS, for example, are diverse and defy a simple profile. But what’s happened since 9/11 is that FBI and local law enforcement have been given an impossible task: stop an attack before it happens.

A 2007 report from the NYPD called Radicalization in the West became the foundation for much of the new “prevent” policing. The paper, which has been widely criticized by civil liberties groups, purported to explain a funnel-like process where a person goes from increased religiosity to violence in a fairly straight line. But as the Times found, the academic research doesn’t support that conclusion. In the case of Ahmed Ferhani, the police department was able to make a headline-generating arrest and mark down a win for its counter-terrorism unit.

What the radicalization model fails to take into account, according to former FBI agent Mike German, is that there is no clear causation between an individual’s increased interest in extremist ideology and the decision to commit political violence. “This concept, that the adoption of a particular belief set is a precursor to violent action is refuted in empirical studies of actual terrorists, like one from RAND, which concludes that an individual’s decision to engage in terrorist violence is a complex one involving a matrix of different environmental and individual factors, no one element of which is necessary nor sufficient in every case (see its “Factor Tree for Root Causes of Terrorism” above, which looks a whole lot more complex than the NYPD’s four-step process),” German wrote in 2013.

As I reported then, previously undisclosed transcripts show that Ferhani wasn’t driven by ties to international terrorist ideology – he was a street hustler trying to make money. He had fantastic schemes about exporting luxury cars. He had contemplated selling the guns and grenade he ended up buying in a sting at a marked-up price. He had previously lost his job, and had long suffered from mental illness, which had been well-documented by the NYPD.

Ferhani said he was physically and sexually assaulted by guards, and was denied access to food, water, and the legal library. Some of the harassment was directly tied to him being Muslim. He said guards had repeatedly put bacon on his food tray.

In a statement released on Sunday, the National Coalition to Protect Civil Freedoms criticized the conditions of Ferhani’s confinement and called for an investigation into his treatment at Attica and Great Meadows.

“We … demand accountability from the legal and criminal justice system that continues to dehumanize and abuse Muslim prisoners without any recourse,” said Kathy Manley, Legal Committee Director of the NCPCF. “We will be following-up with the appropriate officials to make sure that Ahmed’s family receives answers.”

In a letter Ferhani sent to The Nation, he mentions about how much he appreciates his defense team, and noted that several of his lawyers were Jewish: “What’s so amazing and ironic is that five out of those seven attornies [sic] are Jewish Americans who are still friends of mine to this day.”

One of his early letters to me was similarly upbeat, despite the clear signs he was struggling: “Stay positive and optimistic and continue on being the good person that you are.”