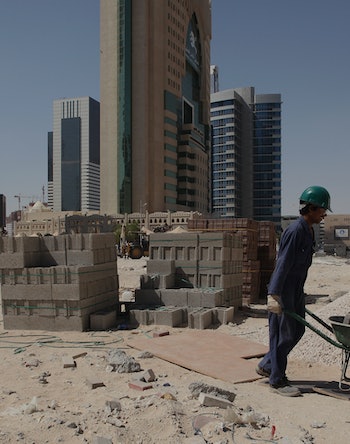 Just 50 years after the 2022 World Cup in Qatar, the country could be so hot that humans won’t even be able to live there.

Writing for Nature Climate Change, Dr. Jeremy S. Pal (of Loyola Marymount University) and Elfatih A.B. Eltahir (of the Massachusetts Institute of Technology) examined and projected the wet-bulb temperature (“a combined measure of temperature and humidity or degree of ‘mugginess’”) of the region to determine that it will soon exceed humans’ ability to adapt to extreme heat.

As they write, humans can adapt to extreme “dry-bulb temperature” (DBT) — which is just temperature — by sweating, so long as the wet-bulb temperature (WBT) doesn’t exceed 35 degrees celsius (95 fahrenheit). Major Arabian cities, such as Abu Dhabi, Dubai, Doha, Dhahran and Bandar Abbas, however, have the potential of surpassing the livable threshold by as early as 2071.

Pal does not mince words when he says:

“These extreme temperatures are likely to become a normal summertime heat wave event by the end of the century, if no progress on climate change is made.”

This year has been a particularly brutal year of heat for Gulf residents. Temperatures in Basra, Iraq, for example, reached as high as 125.6 fahrenheit. Although Eltahir emphasizes that heatwaves are not likely to occur frequently — they’re projected to come about once a decade — the conditions are not safe to live in for long.

The best way to combat against steadily increasing temperatures, according to Pal and Eltahir, is to reduce the levels of carbon dioxide and greenhouse gas emissions.

Of course, the region that’s most vulnerable to climate change also benefits on a massive scale from its export of oil. So while the money rolls in now, there may not be a place for that profit to go if serious consideration isn’t given to environmental policy change.

Qatar, most notably, is in danger because “Doha is uniquely geographically positioned to receive hot dry air from the desert interior to the west and hot moist air from the Gulf.”

Doha, in particular, could exceed livable temperatures in the years 2095-2100. That may be 80 years from now, but Qatar does have a high-profile event coming to the country in just seven years: the 2022 World Cup. If the possibility of money laundering is not enough to strip the country of its host duties, maybe physically harmful temperatures will.

Meantime, there are 7 years, 26 days until the 2022 World Cup kicks off. It’s being held in November instead of the traditional summer season — because of the heat.