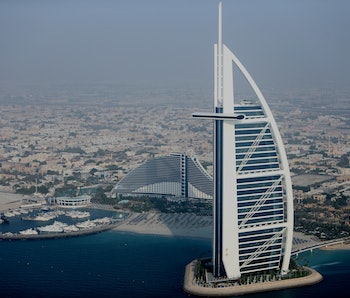 Dubai’s insane construction binge is making the local climate hotter. A new study has found that construction activities raised the average temperature in some parts of the city by 3.6 degrees Fahrenheit between 2001 and 2014. That’s pretty significant in a place where the average daily high in August is 106 degrees. The report, authored by geoscientists at Tel-Aviv University, was recently published online in Earth’s Future, a journal of the American Geophysical Union.

When you replace the nearly-white desert with darker pavement and concrete, you decrease the albedo — or the reflective capacity — of the landscape, causing it to absorb more energy and therefore get hotter. This is a widely known symptom of urbanization, and it creates what climatologists call an “urban heat island” effect. Nowhere is this more dramatic than in Dubai, which is located in one of the hottest regions on the planet and has experienced urbanization at an almost unprecedented rate over the past several decades.

In addition to heating up, urban areas became more humid and less windy over the period of study. These effects compounded each other to make the city even less livable. That is, at least, unless you can afford trips to Dubai’s indoor ski hill and other hubs of extravagant air-conditioned entertainment. Or, if you can snag a prime piece of property on one of Dubai’s man-made coastal islands and outcroppings — the researchers found that construction of these artificial landscapes had the opposite effect, increasing the surface albedo and lowering local temperatures. Just make sure there’s money in the budget for shoring up the fake islands as they get increasingly swallowed up by climate change-related sea level rise.

And climate change, of course, is also bumping up temperatures a notch, making the city more and more dependent on climate-control to attract wealthy tourists. The hotter it gets, the more energy it will take to keep those indoor malls and playgrounds comfortable. Where does that energy come from? Unsurprisingly, most of Dubai’s electricity is powered by burning fossil fuels. Just call it a super-heated experiment in feedback loops and unsustainability.