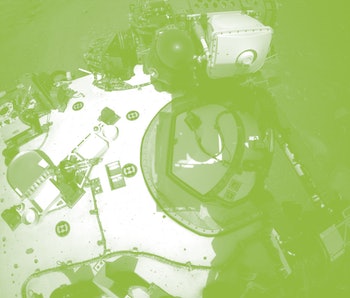 Today's lead story looks at some details you might have missed regarding this week's incredible landing on Mars. But first, today marks a very small step for mankind.

The year was 1949. World War II is over and former Nazi scientist Wernher Von Braun has been working with the United States since he surrendered to American troops in Austria five years ago. Since then, the American military has been working with a combination of Von Braun's V-2 rockets and American WAC Corporals, early testing rockets under what was known as the Bumper program.

At the White Sands Proving Ground in New Mexico, an early rocket named the Bumper 5 made a small but crucial piece of history: It became the first American rocket to enter what is officially known as “space.” It flew 244 miles, far above the 62-mile Kármán line that divides Earth and space, as well as the 50-mile designation that the US Air Force and NASA currently use.

The Bumper tests were so successful that the next year they were moved from New Mexico to a place more recognizable to space fans: Cape Canaveral, Florida, where they would be the first rocket launches.

Our question of the week is about a video game series that Inverse holds dear and has been the cause of endless debate online. We're about to celebrate the 35th anniversary of Zelda. Which Zelda game is your favorite? We've got a poll for you to vote on in our Google form.

This is an adapted version of the Inverse Daily newsletter for February 24, 2021. Subscribe for free and earn rewards for reading every day in your inbox.

Jared Isaacman wants you. So does SpaceX. Four private citizens are going into space, and two of the tickets remain up for grabs in a competition.

The “Inspiration4” mission, expected to launch no earlier than the fourth quarter of 2021, will be the world's first all-civilian spaceflight. The mission will send a Crew Dragon capsule whizzing around the Earth for three or four days.

On Monday, February 22, the group behind the mission announced that Hayley Arceneaux, a 29-year-old physician assistant at St. Jude's Children Research Hospital and a bone cancer survivor, would join the mission. She will be joined by Jared Isaacman, the founder and CEO of Shift4 Payments.

Here's how you can be one of the remaining two. Just make sure to shout out Inverse Daily when you're up there.

What they're saying: “I think this mission is going to inspire people in so many ways.” —Hayley Arceneaux, a 29-year-old physician assistant at St. Jude's Children Research Hospital and a bone cancer survivor, who you might be joining on your way to space.

How to get involved with Inspiration4 →

There's a forgettable rom-com starring Diane Lane and John Cusack called Must Love Dogs. While the movie is in the dustbin of history, its title speaks to a deeper message: people absolutely love dogs.

Americans devote countless hours to finding the best products for our pups, smother them with treats, and worry about how they'll cope with separation anxiety.

But how much do we know about human-canine relationships when dogs weren't yet man's best friend? That ancient history of dog domestication has been a little murkier, particularly when it comes to the arrival of the first dogs in the Americas.

A new study finally offers an answer to this burning question. For the first time, research published Wednesday in the journal Proceedings of the Royal Society B genetically confirms the oldest dog remains found in the Americas: 10,150 years old.

What they're saying: “Our study suggests that dogs participated in this initial migration.” —Charlotte Lindqvist, a co-author on the study and an associate professor at the University at Buffalo, to Inverse.

How old is that in dog years? →

Throughout the pandemic, we've heard the same advice repeated so often it feels like a lecture from Mom: go take a walk.

But instead of a well-meaning parent, scientists and wellness gurus are the ones berating us. Get off the couch! Get some Vitamin D! Soak up some sunshine! You'll feel better!

And while small walks can offer a reprieve, sometimes you need a full-on escape. And for that, Inverse science writer Tara Yarlagadda offers some insight into a remarkable game on Apple Arcade.

What they're saying: “The game's message is simple but effective. To save an ecosystem, it takes the whole community — even its smallest members.” —Tara Yarlagadda , Inverse science writer, on the game you need to try out.

A whole new walk on the beach →

It was the first great show of 2021. Then, it offered up the first viral song of the year. Is there anything WandaVision can't do? That's what everyone is waiting to find out after last week's delightfully devilish twist. The show is moving quickly through both eras of television and Marvel lore. After the latest episode on Friday, make sure to check out the Inverse breakdown of what's next for Wanda, Vision, and maybe even Ralph.

For the people — Scientists can influence Congress. A new study reveals how to do it.

Scientists want Congress to use science when writing their legislation. That makes sense, right? But it's tougher than you might think. Legislation is written by a whole lot of people, and scientists are not often in the room as it happens. A new study offers a method of collaboration with a randomized clinical study of Congressional offices to check its effectiveness. It's pretty effective, it turns out.

The key? Not trying to lobby people in Congress.

What they're saying: “Instead, the intervention effort aimed to increase the use of scientific evidence while writing new bills.” —Max Crowley, director of the Evidence-to-Impact Collaborative, Penn State University, and co-authors, in their study.

How science can get into laws →

Landing on Mars? Sure, that's pretty cool. But NASA has never been the type of government agency to settle for “pretty cool.” There's an extra coded layer to the Perseverance touchdown that was later revealed by the power of the internet.

On Monday, when NASA released a video of the Perseverance rover landing on Mars, team members of the mission hinted at a “secret message” left behind in the touchdown sequence. Within hours, digital detective work cracked the code, revealing that Perseverance's parachute reads “Dare Mighty Things” in binary code.

Learn about the meaning of the message and how it ended up on Mars.

What they're saying: “Sometimes we leave messages in our work for others to find for that purpose, so we invite you all to give it a shot and show your work.” —Allen Chen, the entry, descent and landing lead for Perseverance.

The secret meaning of messages on Mars →

And if you're looking for more, check out the 6 best sci-fi movies coming to Hulu in March 2021.