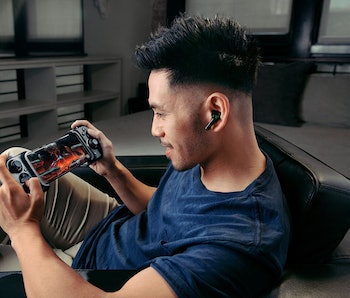 As someone who's dropped a Nintendo Switch on their face while playing in bed, I can say that the Razer Kishi for iPhone — released in September — is an excellent mobile gaming alternative.

The Kishi is far lighter and more portable than the Switch. While $99 might seem like a steep price to pay for a smartphone peripheral, in households with numerous Apple devices, the Kishi is able to level-up gaming via the Apple Arcade in compelling ways.

Unlike many mobile gaming controllers out there, the Kishi collapses and extends easily. In its compact form, it's smaller than the Switch's Joy-Con grip. Any game it works with can also connect to a PlayStation DualShock 4 or an Xbox Wireless controller, but it will be far less cumbersome.

The exposed joysticks limit its mobility a bit, but the real draw here is the emerging gaming platform of Apple Arcade. The monthly subscription will set you back $4.99 per month. For less than $60 a year, an entire family can play games like Jenny LeClue: Detectivu or Pac-Man: Party Royale. The Kishi makes that solid deal even sweeter.

"With a single subscription, a family of six can jump from iPhone to iPad, Mac, and Apple TV, and enjoy every game without any ads or in-app purchases," Razor promises in official materials.

While Apple Arcade does have plenty of games worth checking out, the future looks even more promising. The Pathless, a stylish open-world adventure game that's also technically a PlayStation 5 launch title, will launch in mid-November on Apple Arcade. Final Fantasy co-creator Hironobu Sakaguchi's current project, Fantasian, will also eventually make its way there. Beyond just Apple Arcade, there are a slew of other games, free or otherwise, that support MFi controllers.

Sadly, you can't just plug in the Razer Kishi and expect it to work with any game. A game needs to have the "Controller Supported" badge, so before you buy a game to play with the Kishi, you'll want to verify it's compatible on a directory like controller.wtf. Super-popular multi-platform games like Among Us and Genshin Impact are not included, which is a shame. But you can play Grand Theft Auto: San Andreas or Life is Strange.

Before Epic Games and Apple had a falling out over microtransactions in Fortnite, the Kishi would have been the single best way to play the hit battle royale game on mobile. That might be the case again one day, but not anytime soon.

Because wired Apple headphones don't seem to work when you plug it into the Kishi's Lightning port, you'll have to either rely on your phone's speakers or use Bluetooth headphones.

The Android-compatible Kishi, released in June 2020, works with Xbox Game Pass via xCloud gaming. For anyone with an Android smartphone, for three times the price of Apple Arcade, you could instead sign up for Xbox Game Pass and play much better games as often as you like. So that's a much better route to take for mobile gaming.

Families wary of spending a lot on next-gen consoles can instead invest in a Kishi, assuming they have a number of Apple devices to share.