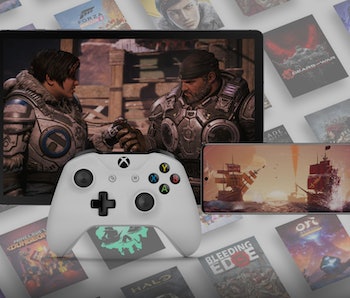 How to set up xCloud with Xbox Game Pass Ultimate

Setting up Xbox Game Pass Ultimate on your phone is a straightforward process.

First, you'll have to download the Xbox Game Pass app from the Google Play Store or your respective Android phone's storefront. At this time, xCloud isn't supported on iOS because of Apple's terms of service were too restrictive until earlier this month.

You'll have to connect your Microsoft account to the app before you can access your games online via the Cloud tab within the app.

In order to play titles via xCloud, you will need an Xbox Game Pass Ultimate subscription, which will be attached to your Microsoft account if you're already a subscriber.

The service normally costs $14.99 a month, but Microsoft is offering new subscribers their first month for only $1 in order to get more people into the service.

After that's all set up, you should be ready to go. Just choose one of the supported games, connect a controller, you will be able to start playing.

Overall, there are more than 150 Xbox Game Pass titles that support xCloud and Microsoft plans to add more to the service later. While you can find a full list on Xbox Wire, some of our favorites on the service day one include Batman: Arkham Knight, Battletoads, ClusterTruck, Destiny 2, Forza Horizon 4, Gears 5, Halo: The Master Chief Collection, Sea of Thieves, and Yakuza 0.

Microsoft also promises in the aforementioned Xbox Wire article that some titles from EA Play will also support xCloud when that service is added to Xbox Game Pass Ultimate later this year. All save data carries over to xCloud as well, so you don't have to worry about losing any progress when switching from console to mobile or vice versa.

Do I need a controller to play xCloud games?

For most Xbox Game Pass games supported by xCloud, you will need some sort of controller to play these games. For those that don't have an extra controller, Microsoft is starting to offer other options. First, they are partnering with third-party companies to produce accessories like the Razer Kishi, a $99 controller that transforms your phone into something that resembles an indie Nintendo Switch alternative.

If you want to spend any money on a peripheral, Microsoft is also starting to test touch controllers for xCloud games. For now, Minecraft Dungeons is the only game that supports it, featuring a "fully-optimized, native touch controls and a redesigned UI to make it easy to navigate the inventory or in-game menu on a smaller screen" according to Xbox Wire.

That post also says "the Xbox Game Pass Ultimate team will continue to work with developers to add touch to even more titles," though, so more games will likely get touchscreen support in the future.

More like this
Gaming
22 hours ago
You need to play the best Xbox exclusive in a decade on Game Pass ASAP
By Hayes Madsen
Gaming
23 hours ago
9 must-play games coming to Xbox Game Pass in January and February
By Robin Bea
Gaming
Jan. 23, 2023
Your ultimate Persona 3 Portable quiz and exam cheat sheet
By Willa Rowe
LEARN SOMETHING NEW EVERY DAY.
Related Tags
Share: