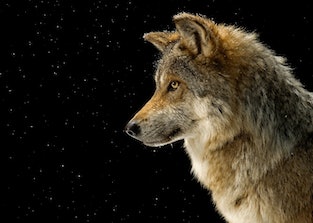 Humans love dogs. We talk to them like babies, we literally spend billions on their Halloween costumes. We smother them with so much love that they get chubby from all the extra treats.

But there was one time when wolves — the ancestors of dogs — and humans were more adversaries than friends. Yet, at some point, wolves became domesticated into pets.

Pet lovers and scientists have wondered: Exactly how did ancient dogs become domesticated?

A new study published in the journal Nature may have the answer to that longstanding question — and it has to do with Arctic humans' eating habits near the end of the last Ice Age, nearly 14,000 to 29,000 years ago.

What you should know — Average global temperatures during the last Ice Age reached 46 degrees Fahrenheit — 11 degrees cooler than today. It was pretty darn cold.

Some scientists, in turn, theorized this extreme environment would prompt wolves and humans to compete over scarce resources.

It's also thought humans had a hard time foraging for plant life in such frigid weather, so they upped their hunting and consumption of animals to supplement their diet. The study notes that animal protein occasionally accounted for as much as 45 percent of the Arctic hunter gatherer's diet, depending on the season.

However, this study's authors wondered whether ancient humans would actually need to compete with dogs for meat — especially since humans can only naturally consume so much protein from animals. They state that people are only able to digest about 20 percent of their energy needs from protein.

Instead, Arctic humans would have to avoid consuming excess lean meat, which can cause death in the most extremes situations due to protein poisoning.

According to the study, hunter-gatherers devised ways of getting around this protein issue by butchering animals so they could consume more fat and less protein.

A new idea — The study authors also wondered: What if humans gave their excess animal protein to wolves, helping domesticate them into dogs? After all, wolves are fully carnivores, unlike omnivorous humans.

To test whether this would have been possible, the researchers analyzed how much excess lean meat protein humans would have to feed to wolves after meeting their own bodies' protein needs.

To do this, they used "simple energy calculations," lead author Maria Lahtinen, a researcher affiliated with the Finnish Food Authority, tells Inverse. The team used existing studies on the composition of wolf prey species to estimate how much fat, protein, and carbohydrates wolves can consume.

Through her calculations, Lahtinen found that these ancient humans could not "consume more than 40% of protein as energy." By comparing the wolf literature to their calculations, the researchers estimated how much energy was left over for humans to provide to wolves.

What was discovered — Subsequent calculations revealed "every one of the prey species of wolves has protein ratios over the limit that humans can consume," Lahtinen and her team write, meaning humans could have easily fed excess protein from their hunts to nearby wolves without causing harm to their own populations.

It was seemingly a mutually beneficial relationship, especially during the harsh winter months: Wolves would get easy access to food, and humans might receive help in hunting prey or protection from predators as these fierce wolves turned into domestic dogs.

The first hypothesis proposes that humans domesticated dogs primarily as hunting partners. But in this study, the scientists argue "it is unlikely that untamed wolves were cooperative hunting partners with humans."

The second hypothesis proposes that wolves were drawn to food waste near humans' sites. The researchers in this study think it's unlikely that hunter-gatherers would have stayed put in one location long enough to generate significant waste that would attract wolves.

This team argues the lean meat protein hypothesis could be the first to truly offer a scientifically sound approach to the origins of dog domestication.

What's next — While the research shows it's possible that humans domesticated wolves by feeding them excess protein, we'd need more data from the Paleolithic era to truly confirm these findings.

"In Paleolithic times, we have always very limited evidence," Lahtinen says. "We need to gather all evidence together and think what makes [the] most sense."

And if you're hoping that we'll find a hypothetical Cave Zero, where the first domesticated dogs once dwelled, you might be waiting a long time.

"It is unlikely that the site where the first dogs lived is ever found," Lahtinen says.

Abstract: Dogs (Canis familiaris) are the first animals to be domesticated by humans and the only ones domesticated by mobile hunter-gatherers. Wolves and humans were both persistent, pack hunters of large prey. They were species competing over resources in partially overlapping ecological niches and capable of killing each other. How could humans possibly have domesticated a competitive species? Here we present a new hypothesis based on food/resource partitioning between humans and incipient domesticated wolves/dogs. Humans are not fully adapted to a carnivorous diet; human consumption of meat is limited by the liver’s capacity to metabolize protein. Contrary to humans, wolves can thrive on lean meat for months. We present here data showing that all the Pleistocene archeological sites with dog or incipient dog remains are from areas that were analogous to subarctic and arctic environments. Our calculations show that during harsh winters, when game is lean and devoid of fat, Late Pleistocene hunters-gatherers in Eurasia would have a surplus of animal derived protein that could have been shared with incipient dogs. Our partitioning theory explains how competition may have been ameliorated during the initial phase of dog domestication. Following this initial period, incipient dogs would have become docile, being utilized in a multitude of ways such as hunting companions, beasts of burden and guards as well as going through many similar evolutionary changes as humans.