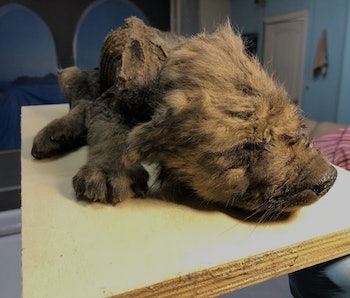 Watching a scrawny, puffer vest-clad Chihuahua scurry along a city sidewalk can make anyone wonder: How is this pampered pooch so closely related to wolves?

But despite the obvious aesthetic differences, dogs and wolves aren’t just distant cousins, they’re the same species, Canis lupus. Dogs, a subspecies, get the addendum familiaris to distinguish them from their wild counterparts. An incredible discovery made last month underscores that genetic closeness — and could provide clues about the link between wolves and dogs.

The star of the show is a surprisingly adorable 18,000-year-old puppy, discovered in the Siberian permafrost of far-east Russia.

Scientists from the Center for Palaeogenetics, based in Sweden, tweeted that a genetic analysis determined the pup’s sex — and also that this ancient Good Boy finally has a name.

Dogor means ‘friend’ in the Yakut language, which frankly warms the heart (the Yakuts are an ethnic group that live in Russia). And this pupper has aged so well that he’s actually still pretty cute — his fur, teeth, and whiskers are all intact, preserved by the permafrost.

Despite ample genetic testing, however, researchers haven’t been able to identify whether Dogor is a dog or a wolf, CNN reports.

“It’s normally relatively easy to tell the difference between the two,” researcher David Stanton told CNN. “The fact that we can’t might suggest that [Dogor is] from a population that was ancestral to both — to dogs and wolves.”

Researchers don’t know exactly when humans bred wolves to adopt the lap-loving personalities and physical characteristics of the dogs we adore today. But it could have been around the time Dogor roamed the Earth. Unraveling this furry mystery could help to fill in some gaps.

The answer could be complicated: Dogor may be “halfway between the two,” Stanton said.

Here’s what we do know about wolves slowly becoming your beloved pet: Wolves began to take on the behavioral traits of domesticity first, scientists say — before they evolved to have the smaller jaws and floppy ears we love to snuggle.

The authors of that study found that domestication “likely targeted tameness,” which appeared before any other differences between wolves and dogs. (Anyone who’s watched their pup go nuts with the zoomies at 3 a.m. might beg to differ.)

But before these tame wolves went through the extensive breeding that has gifted us the motley lineup of dogs big and small that we adore, there was Dogor. And, puffy vest or not, this old Good Boy is cute AF.

More like this
Science
19 hours ago
Octopus facts: 5 incredible tidbits you didn't know about the cephalopod
By The Conversation, Erin Spencer and Yannis Papastamatiou
Science
12 hours ago
200 years ago, this terror of the Amazon inspired the world’s first batteries
By Timothy J. Jorgensen and The Conversation
Science
5.11.2022 11:00 PM
Look: Missing 19th century platypus and echidna specimens discovered in museum storage
By Jennifer Walter
Related Tags
Share: