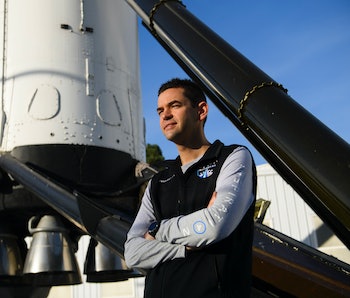 Jared Isaacman, who arguably made history as one of the four passengers on the first all-civilian orbital spaceflight, is going back to space. On February 14, the Inspiration4 mission commander announced that he has purchased three more flights with SpaceX — including the first human spaceflight on Starship.

The Polaris program will go further than Isaacman’s previous mission to space, when he flew with three other civilians on the Inspiration4 mission in September 2021. This program covers three missions:

SpaceX, Elon Musk's California-based aerospace company, launched the Inspiration4 mission on September 15 at 8:02 p.m. The Falcon 9 rocket took off from Launch Complex 39-A at the Kennedy Space Center in Florida.

The mission flew using the Crew Dragon craft, designed primarily to transport NASA astronauts between Earth and the International Space Station. SpaceX has made no bones about its desire to use the spacecraft for private citizens to travel to space, too.

Here's everything you need to know about Jared Isaacman, and why he is going to space.

29 Reasons is an occasional series from Inverse that offers essential context about something new in the world.

Who is Jared Isaacman?

These are ten fast facts about Isaacman you should know:

Keep reading for facts 11 through 29!

11. Isaacman may be a billionaire now, but he is actually a high-school dropout.

13. Isaacman's company handles more than $200 billion in payments every year for a third of the country’s restaurants and hotels, including the Hilton, Four Seasons, as well fast-food chains like KFC and Arby’s, according to Forbes.

14. In 2011, he co-founded Draken International, along with Sean Gustafson and Scott Poteet.

15. Quite unlike Shift4 Payments, Draken provides tactical aircraft and trains pilots for the U.S. military.

16. Isaacman's company owns a fleet of around 70 fighter jets, which is considered the largest private air force.

Isaacman is a pilot himself, and he used to fly as a member of the Black Diamond Jet Team, a civilian aerobatic display team.

Want to find out more about SpaceX’s plans for opening up spaceflight? Subscribe to MUSK READS+ for exclusive interviews and analysis about spaceflight, electric cars, and more.

What is Jared Isaacman's connection to SpaceX?

17. Isaacman has a taste for adventure. He once set a speed record while flying around the world in 2009 in order to raise money for the Make-A-Wish Foundation, which raises money for childhood terminal illnesses.

18. He completed the global flight in 61 hours, 51 minutes, and 15 seconds, while the previous record-holder had completed it in about 82 hours.

19. Although Isaacman had never flown to space before Inspiration4, he is a self-proclaimed space enthusiast. As a result, the billionaire jumped on the chance to become the first civilian astronaut.

20. Isaacman shares this title along with the three other passengers on board SpaceX's trip to orbit Earth.

21. “Inspiration4 is the realization of a lifelong dream and a step toward a future in which anyone can venture out and explore the stars," Isaacman said in a statement to Business Wire.

Who did Isaacman take to space on Inspiration4?

The second crew member was Hayley Arceneaux, a physician assistant at St. Jude Children's Research Hospital. The third was Sian Proctor, a geoscience professor at South Mountain Community College in Phoenix, Arizona. The fourth was engineer Christopher Sembroski, whose friend Kyle Hippchen won a seat on the trip but had to pass it up to Sembroski because Hippchen exceeded the weight limit.

23. One thing that will unite all of his fellow crew, Isaacman declared ahead of the launch, is that they will be people “from everyday walks of life.”

What did Jared Isaacman do in space?

24. Once off Earth, the capsule was set to automatic piloting, although Isaacman had the ability to override the system if need be.

25. Additionally, Isaacman was "supported by SpaceX mission control for the duration of the journey," according to the Inspiration4 site.

26. The spacecraft orbited the Earth in a journey that took around two days before the civilian crew made it back to solid ground. In that time, the crew onboard enjoyed the view of the Earth from a few hundred miles above the surface.

27. The flight orbited Earth every 90 minutes along a customized flight path, according to SpaceX.

28. As well as donating the other seats on the craft, Isaacman also announced he would use the flight to space to raise $200 million for St. Jude Children’s Research Hospital — hence the passenger pick of Arceneaux.

29. Half of that amount was donated by Isaacman himself, he said.

“I appreciate the tremendous responsibility that comes with commanding this mission and I want to use this historic moment to inspire humanity while helping to tackle childhood cancer here on Earth,” Isaacman said in a statement in May 2021.

This is the same inspiration as his effort to circumnavigate the globe at record speeds in a light jet, back in 2009.

SpaceX is planning another private, roundtrip flight to space, due to launch no earlier than March 2022.

Four crew members have been chosen by Axiom Space for its Ax-1 mission. Each of the crew will effectively pay $55 million for their seat and eight-day stay on the International Space Station.

Axiom Space will also use the Crew Dragon capsule, suggesting SpaceX's future may lie increasingly in taking tourists into the cosmos, and not just astronauts.

SUBSCRIBE TO MUSK READS+, A PREMIUM NEWSLETTER THAT COVERS THE WORLDS OF ELON MUSK, SPACEX, TESLA, AND EVERYTHING BETWEEN

This article was originally published on Feb. 5, 2021