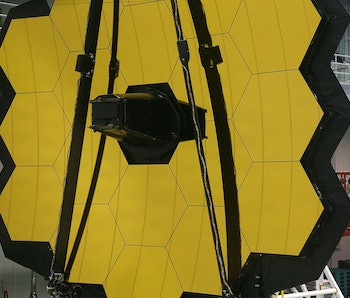 It’s a Monday in July and this edition has stories about the inside of your head and the inside of Mars. I’m Nick Lucchesi, editor-in-chief at Inverse. Scroll to the bottom of this email for a newish feature, the heavy metal song of the day that’s based on science.

This is an adapted version of the Inverse Daily newsletter for Monday, July 26, 2021. Subscribe for free and earn rewards for reading every day in your inbox.

Why dirt may ruin our best view of aliens — Colette Lepage watches over a clean room that houses the biggest space telescopes, including the James Webb Space Telescope, due to launch in October 2021. Passant Rabie explores what it takes to keep a $9.7 billion sat clean:

A single speck of dust or the amino acids, water, and proteins that make up a fingerprint. That’s all it takes.

Minuscule foreign substances can spell disaster for a space telescope; just one mote can throw off a telescope’s sensitive instruments. You can’t wipe a lens clean very easily once the telescope is in orbit, putting the entire mission at risk.

For NASA’s James Webb Space Telescope, the stakes are even higher: the James Webb will be located a million miles from Earth.

What’s beneath the surface of Mars — Jon Kelvey reports on a trio of papers about Marsquakes give the first clear picture of the Martian interior and confirms the planet has a liquid core:

If you’ve ever taken a planetary science course, or maybe just cracked open a book on the Solar System, you may have seen diagrams of the internal structure of the planets, showing their crusts, mantles, and cores.

What you may not realize, NASA Jet Propulsion Laboratory geophysicist Mark Panning tells Inverse, is that those diagrams “are cartoons and guesses” based on gravitational measurements. The only planet whose structure scientists actually understand in detail is Earth.

We know the innards of Earth through seismology measurements — something that hasn’t been available for other planets. Until recently, this was true. According to a trio of papers published last week, researchers can finally confirm Mars has a large liquid metal core.

Imposter syndrome: The one vital question men have to ask themselves — Katie MacBride reports on “imposter syndrome,” which describes high achieving individuals who have persistent self-doubt and anxiety about being exposed as an “imposter”.

The first time Brian remembers feeling like an imposter, he was in the third grade.

“That was the year we started getting letter grades instead of ‘satisfactory’ or ‘unsatisfactory,’” he tells Inverse.

When he got a B on a test for the first time, it was devastating for him. A teacher asked what was wrong; Brian said it was the B.

“He reassured me that I did well and a B was a good grade,” Brian says. “My response was something like, ‘Yeah, ‘but a B isn’t as good as an A.’”

More in the Detox series:

The 2020 Summer Olympics have officially kicked off in Tokyo, and one of the most epic early surprises is how prominently video game music featured in the opening ceremony.

Did you catch yourself imagining Cloud Strife spinning his Buster Sword as the athletes marched by on your screen? That’s probably because you heard the familiar notes of Final Fantasy’s “Victory Fanfare,” which has been a staple of the series for decades.