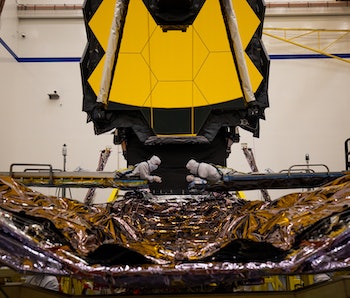 The most anticipated telescope is getting ready to venture into space. Following years of delay, NASA’s James Webb Space Telescope (JWST) is slated for launch on October 31, getting us one step closer in our search for life beyond Earth.

The telescope will help scientists peer back in cosmic time, observing galaxies that are over 13 billion light years away, and studying alien worlds in search of signs of life (whether past, present, or future).

As JWST gears up for launch, Inverse breaks down its mission, orbital path, and its long and complicated road to space.

By now, space enthusiasts are pretty familiar with the Hubble Space Telescope. Hubble has been running for more than 30 years and is due for a long-awaited retirement. JWST is meant to come in as Hubble’s successor, but 100 times more powerful.

What will the James Webb Space Telescope do?

JWST is a large infrared telescope with a wide eye on the cosmos. By looking in infrared light, the telescope can observe the cosmos in greater detail than ever before.

The telescope sports a 21-foot-wide, 4-inch-thick tiling of mirrors acting as one large mirror. This will enable it to observe distant objects in the universe better than any other instrument in the world, due to both its size and its location far away from Earth.

A large mirror is needed to reflect light from objects in space. This amplifies the light into the secondary mirror, enabling the telescope's instruments a larger, clearer view of the heavens. This also will enable detailed observations that no telescope on Earth can do, including:

Looking for alien life — Since the discovery of the first confirmed exoplanet in 1992, astronomers have observed more than 4,000 alien worlds orbiting around distant stars.

The explosion in exoplanets is due in large part thanks to NASA’s Kepler mission and the Transiting Exoplanet Survey Satellite (TESS) missions. Kepler stared at a narrow region of space around the constellations Cygnus and Lyra until its demise in 2018, while TESS surveys 200,000 of the brightest stars in the sky.

But unlike these missions, the JWST will be able to study the atmosphere of exoplanets in great detail in order to figure out whether or not they have the ingredients necessary for life. It will have a high enough resolution to witness planets passing in front of their home star and draw out atmospheric properties when they transit.

Webb perform spectroscopic measurements of the planet's atmosphere, assessing the intensity of light at different wavelengths to study the composition of their atmosphere.

Time machine — Due to its powerful observing capabilities, JWST will act as a cosmic time machine as it looks back at objects billions of light years away.

The telescope will be able to see the composition of some of the first galaxies and determine how they came together and what role they played in an event known as the Epoch of Reionization. This was an era — about 500 million to 1 billion years after the Big Bang — when stars and galaxies began to ionize clouds of neutral hydrogen, making much of the space we see around us transparent instead of opaque.

Using the JWST, scientists will be able to look back at that crucial turning point in the universe’s history, observing the very first stars and galaxies, or sources of light.

OG galaxies — Along with the oddball galaxies that catalyzed reionization, astronomers will be able to look into the process that caused the formation of large galaxies like we see today.

Galaxies such as the Milky Way formed over billions of years through mergers with smaller galaxies and other processes. But the very first galaxies of the universe looked very different, sometimes rather small and clumpy with stars.

By observing galaxies in the ancient universe, scientists will be able to study how galaxies evolved over time to form the structures that they are in today.

Clear views — Infrared capabilities will help the telescope see beyond what we can in visible ranges — including staring right through otherwise opaque areas of space. As we image nebulae using our current instruments, a lot is hidden from our view with clouds of dust. But an infrared camera picks up heat, so it goes beyond what we can see with visible light.

With JWST, astronomers will be able to see many of the stars tucked behind dust clouds and get a better sense of what the cosmos looks like.

When will the James Webb Space Telescope launch?

The telescope is scheduled for an October 31, 2021 launch date.

JWST has been in the works for nearly a decade, since 1996. But it has suffered from continued delays, which have also contributed to a large cost overrun. The current cost estimate has been $10 billion. Perseverance, the top-of-the-line new Mars rover, cost around $2 billion.

The telescope had an initial launch window scheduled for 2018, and later pushed back to 2020 before finally setting in for a 2021 launch.

What is the James Webb Space Telescope orbit?

JWST will be situated 1 million miles away from Earth at what is called the second Lagrange point or L2, which lets the telescope stay in line with our planet at a stable point as it moves around the Sun. By doing so, the telescope protects itself against the light and heat of the star.

It will take the telescope six months to complete one orbit.

JWST’s orbit keeps the telescope out of the shadows of both the Earth and Moon, allowing it to have an unobstructed view of the universe for the entire duration of its orbit. Meanwhile, Hubble goes in and out of Earth’s shadow every 90 minutes.

How will the James Webb Space Telescope be deployed?

After undergoing a series of tests at the Northrop Grumman Space Systems in Redondo Beach, California, the telescope will be packaged up and shipped to French Guiana for launch onboard an Ariane-class space rocket.

But the James Webb Space Telescope’s mirror is so large that it can’t fit into the Ariane V. In order to fly the telescope into orbit, the mirror must be tucked away during the ride to space.

The telescope’s mirror was built in 18 separate segments on a structure that folds up. Each of the segments is around 4.3 feet in diameter. Once in orbit, JWST can fully spread its wings, deploying the segments to its sides and initiating detailed observations of our cosmos.

JWST is intended as a follow-on from Hubble, which has been in space for more than 30 years at this point. Webb will primarily look at the Universe in the infrared, while Hubble looks primarily in optical and ultraviolet wavelengths.

Among the key upgrades:

Once out to L2, the telescope, unlike Hubble, isn’t designed to be easily upgraded or repaired. That means that come October, we will have to hope that everything goes smoothly.