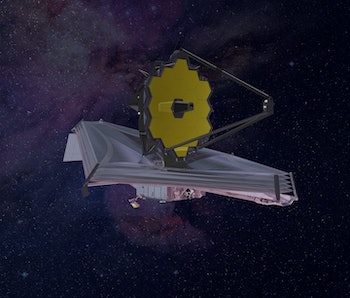 In just a few years, humans may finally be able to look up at the sky and know for certain there’s a planet out there that could host life, just like Earth. The instrument that proves it could be NASA’s upcoming James Webb Space Telescope, which will conduct follow-up observations of the TRAPPIST-1 star system 40 light-years away and find out if any of its seven Earth-sized planets have an atmosphere capable of supporting life.

The JWST, the successor to the vaunted Hubble Space Telescope, is a powerful infrared telescope with a 6.5-meter primary mirror that can observe distant objects in the universe better than nearly any other instrument in the world. NASA will launch the telescope on an Ariane 5 rocket from French Guiana in October 2018. By April 2019, we may see some exciting data from the telescope.

“It’s very exciting to see the data bearing out the suspicions astronomers had for a long time,” James Webb Program Director Eric Smith tells Inverse. “It’s not the matter of if we’ll discover an Earth-like planet in a habitable zone, it’s when. In a system that’s relatively nearby, that’s exciting.”

Using the JWST, scientists will specifically be able to study the atmospheric chemistry of the TRAPPIST-1 planets and determine whether they possess components essential to life. Planetary atmospheres are comprised of different chemical elements, and each chemical element will leave a certain signature in the atmospheric spectrum. Water, for instance, will leave a characteristic signature in the air. If scientists observe this signature, they’ll know the atmosphere has water — which is good news when trying to figure out if there’s a chance extraterrestrial life inhabits another world.

“What [the JWST] will do is determine what are the major components of the planet’s atmosphere,” Smith says. “If it has a lot of water, a lot of oxygen, a lot of methane, it will be able to find those things in the atmosphere. We can see if it has an atmosphere similar to Earth or different from Earth.”

One of the planets, TRAPPIST-1e, is even in the Goldilocks zone, meaning the zone that’s not too close to the star or too far, but just right for possibly supporting life.

“If it’s got liquid water, it’s got water in its atmosphere, it doesn’t have something super poisonous in its atmosphere, that’s a place that could support life, and that would be tremendously exciting,” Smith says. “We won’t be able to detect that life with JWST, but I think that would be a tremendous discovery in and of itself to say, ‘that place could have life.’”

Scientists believe the TRAPPIST-1 system is relatively stable because the host star, an ultracool dwarf, is pretty dim and pretty old. It’s much more likely to exhibit stable qualities, and probably isn’t inundating its planets with globs of radiation and stellar flares.

“In the case of an older system like TRAPPIST-1, we know it’s old because it’s a small red star,” Smith says. “That system has been around for a long time already, so this migration of planets probably happened earlier.”

Right now, the team is testing JWST at NASA’s Goddard Space Flight Center in Greenbelt, Maryland. The telescope has a five-layer sunshield the size of a tennis court that can reduce the heat from the sun. It will also use cameras and spectrometers, or detectors that can record faint signals, as well as a cryocooler for cooling mid-infrared detectors so they can function.

If we find that any of the TRAPPIST-1 planets could potentially support life, this will pave the way to build more powerful telescopes to investigate this in further detail.

“This is a tremendously exciting possibility for the JWST, and we most certainly will observe this system, but it’s also part of a long chain of astronomy and telescopes improving upon one another,” Smith says. “Even though it will be the biggest [telescope] put out into space, we know it won’t be the last because there will be more questions to ask.”