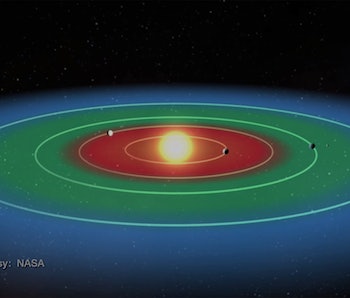 The biggest number being thrown about in NASA’s big exoplanet announcement on Tuesday wasn’t 1,284 (the number of new exoplanets confirmed by the agency’s scientists). It was nine — the number of new planets found to be located in the Goldilocks zone of their respective star systems.

You might be thinking: “Goldilocks zone? Is that for real?” Fair question, and the answer is yes — it is real. The Goldilocks zone is another word for the habitable zone around a star’s orbital space, where a planet is thought to have the potential to develop the types of global environmental conditions necessary for evolving and/or fostering life. As the story goes, it’s just right — for humans.

How did it get that name? The answer requires a bit of a primer on the nuances of what scientists are looking at and referring to when it comes to extraterrestrial habitability.

Here’s the deal: for reasons that are plainly obvious (unless you’re a conspiracy theorist, which in that case, we have a presidential candidate you may want to take a look at), we only have Earth to look at for context about what’s essential for life.

When you peel back all the layers and you get right down to what is needed for single-celled microorganisms to survive and reproduce, the single most important factor for life is water. Liquid water. That’s the reason discovering liquid water on the surface of Mars was so exciting — and that’s what explains what we look for in the Goldilocks zone. Apologies for the cliche, but when it comes to the search for aliens, water is life.

For liquid water to pool up in a stable form on the surface of a planet, the temperatures must fall into a favorable range — provided there is sufficient atmospheric pressure. It can’t be too hot or too cold or else the water will simply evaporate or freeze out. It needs to be a rocky planet, of course — and it can’t be too big or too small.

Planets that exhibit these kinds of characteristics are almost exclusively limited to a certain orbital range that is neither too close nor too far from a star. The star itself has to be of a certain spectral type that is not too weak nor too powerful, and falls within an age range that is amenable to stability as well.

That’s why we sometimes call the habitability zone the Goldilocks zone. It can’t be too much on either extreme — it has to be just right.

Overall, the galaxy is our Three Little Bears’ house. Life is Goldilocks looking for the perfect situation — which could potentially be those nine new exoplanets and the 21 others we previously found.

More like this
Science
Feb. 2, 2023
Exclusive: NASA Explains How the Voyager Missions Could Live Until 2035
By Kiona Smith
Science
Feb. 4, 2023
An Upcoming Mission to the Dark Side of the Moon Could Radically Reshape Astronomy
By PAUL M. SUTTER and Universe Today
Science
Jan. 29, 2023
NASA-funded study to research if bacteria could help form building materials on Mars
By Matt Williams and Universe Today
LEARN SOMETHING NEW EVERY DAY.
Related Tags
Share: